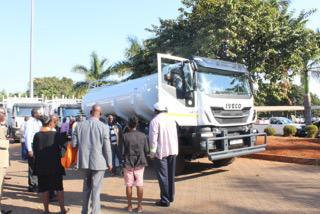 LIMPOPO – As water supply continues to be a challenge for most residents of rural Vhembe, the district municipality has spent R8-million on two water tankers and six cranes for the area.

The tankers will be used to transport water to deep rural villages that have no running water and the cranes will be used by the Vhembe District Municipality to repair the broken boreholes which supply water to many of the villages.

While handing over the trucks to service workers, Executive Mayor Florence Radzilani said the municipality was concerned about people not reporting burst pipelines quickly, leading to unnecessary wastage. 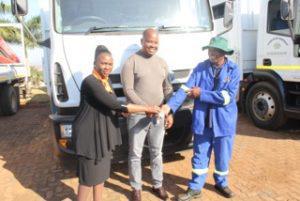 Mayor Florence Radzilani handing over the water tankers that will supply rural villages without a water supply.

She added: “We have fixed most of our boreholes which were reported broken and we can confidently say that we are now able to provide water to most of our villages which were previously unable to receive water due to broken boreholes.”

Currently the municipal has 16 water tankers providing water to dry villages within the district.

Radzilani also pleaded with the municipal officials who deal with water to attend all the problems regarding water supply which are brought to the municipal quickly so as to avoid delays in terms of water supply.

‘Forced to use contaminated’

Despite Radzilani’s efforts to provide water supply to every village within the district some rural villages such as Mpheni, Waterval, Masisi, Ha-Mabila and others continue to suffer without any kind of supply and are forced to use contaminated water from their local rivers.

Earlier this year Health-e reported on how the Waterval and Mpheni villagers were forced to drink contaminated river water close to where a local sewage line was depositing waste in the river.

“We are still without water despite our complaints to the municipality as they keep on telling us that they are still fixing broken boreholes. But it’s been years now, and the situation is not being addressed. We are still forced to use river water as we have no other choice,” said Sylvester Mulaudzi, a Waterval resident.

Vhembe District Municipality spokesperson Matodzi Ralushai said that the municipality was still busy fixing most of the broken boreholes within the district.

“We do send water tankers every week to all our villages with water shortage challenges, while we are busy repairing some of our broken boreholes in dry areas,” he said.