Home » Youth is no protection against breast cancer 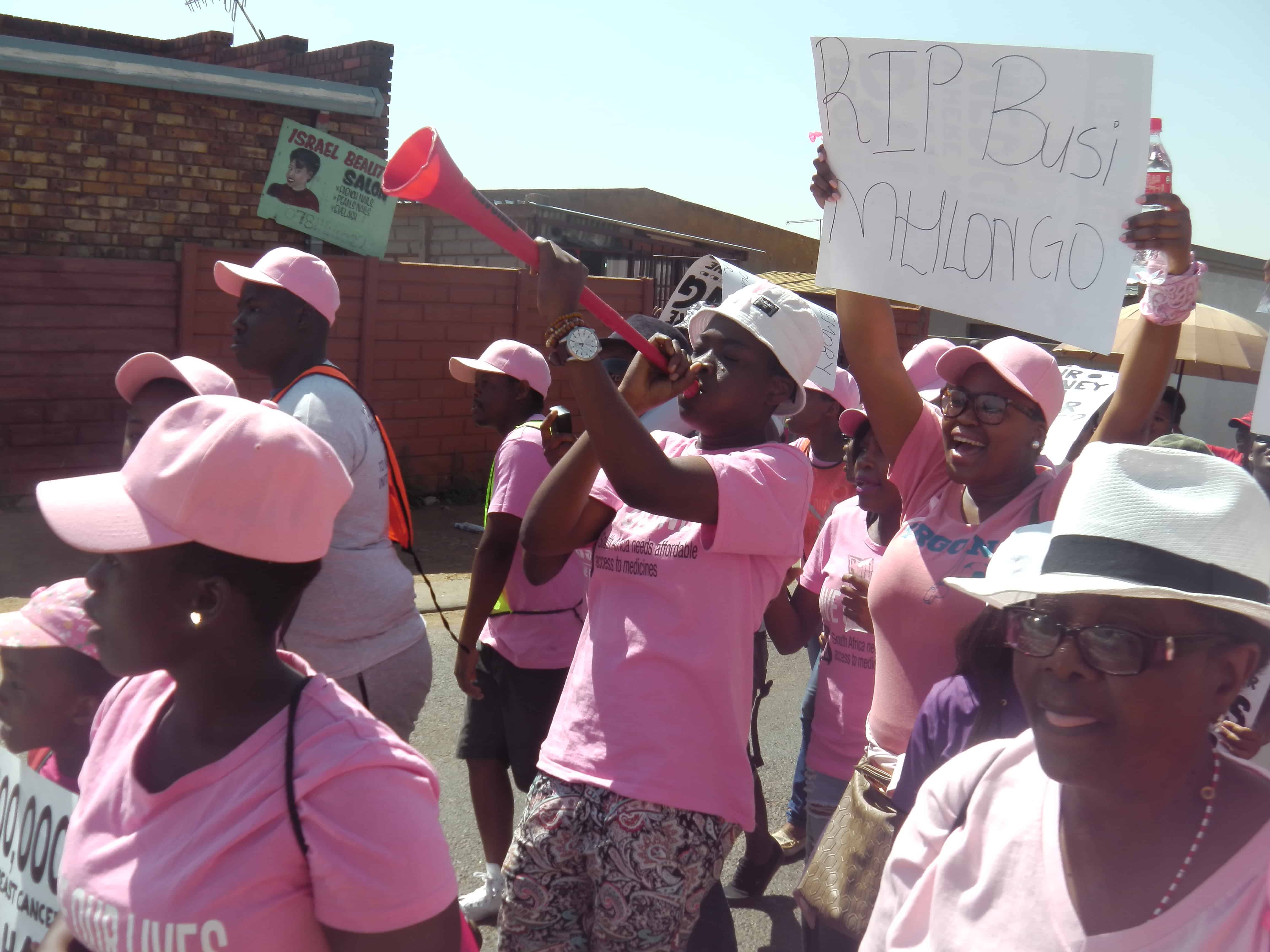 Think breast cancer is something only older women have to worry about? Think again. Experts say there are no age restrictions to this cancer – but that social support can mean the difference between life and death.

In the Autumn of 2008, Ntokozo Dludla was visiting her parents and daughter in Johannesburg. She lived and worked in Durban at the time. One morning as she and her 11-year-old daughter crossed paths in the house, her daughter accidentally bumped into her.

“Mom, I felt something in your breast,” she exclaimed. “Can I touch?” Dludla laughed and brushed it off: “What do you really know about breasts?”

But Dludla didn’t know that her daughter had been taught about breast self-examinations at school a couple of weeks before.

“We were told that if your breast has a lump and there’s discharge coming out it then you should go to the doctor,” she told her mother. Dludla let her examine her breast and the 11-year-old discovered a big lump in her mother’s right breast.

Dludla, 35 years old at the time, returned to Durban. At first, she ignored what her daughter had told her. “I just thought it was just a pimple that will go away with time,” she explains. But her daughter kept calling her and insisted that she must to go to the doctor. Eventually, she relented and visited a general practitioner.

“He told me there was nothing wrong with me, especially because of my age. He prescribed antibiotics for me,” she remembers.

But Dludla was now more aware of her breasts than ever before, she started checking them more often. “After six months I noticed that there were dimples around where the lump was, it looked like cellulite. My breast was also droopy,” she says. “I started to worry.”

She went for a second opinion at the Prince Mshiyeni Memorial Hospital in Durban. That doctor told Dludla the same thing: she is too young to have breast cancer. But this time she stood her ground. She was booked for a biopsy where doctors extracted a sample of cells from her breasts, and a mammogram where they took X-rays of her breasts.

A week later she returned to the hospital for her results. The doctors found cancer cells in the lump, which confirmed that Dludla indeed had breast cancer.

“A second became a year,” she recalls. “I didn’t know anything about breast cancer. I used to watch TV and see people with cancer and think they are dying,” she says.

Dludla decided to move back to Johannesburg so that she could be around her family while she went through treatment. “I thought to myself: If I am going to die, then I should be with my loved ones.”

Over 8,000 women in South Africa were diagnosed with breast cancer in 2014, according to the latest figures from the country’s National Cancer Registry. One in 27 women in the country will develop breast cancer during her lifetime, making it and cervical cancer among the leading cancers in women.

Having a family history or previously being diagnosed with breast cancer, being overweight or obese, smoking and alcohol abuse are some of factors that make someone more likely to develop breast cancer, says Dr Elvira Singh, the registry’s head. Ethnicity also plays a role, with white women having a slightly higher risk than any other race, says Singh. About 40% of new breast cancer diagnoses in 2014 were found in white women.

Breast cancer is treatable when it is detected early. But for many women chances of survival are decreased because of how long it takes them to get a diagnosis.

“Many women only get the medical help they need when their cancer has already progressed because of poor access to screening, diagnosis and treatment,” Singh explains. And sometimes, like in the case of Dludla, women are misdiagnosed with other conditions before health care workers are able to determine it is cancer. 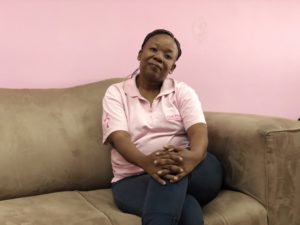 Patients are often blamed for delayed diagnosis but most research shows that the delays are often with doctors and nurses and that is where the most focus of improvement needs to be, says Dr Jeniffer Geel, a member of the Ministerial Cancer Advisory Board and a paediatric oncologist. “In both my state and private practice, the majority of patients are not diagnosed and referred timeously,” she explains.

But the National Department of Health says they are taking a “patient-centred” approach to deal with the problem. “For a number of years breast and cervical cancer have been the most common cancers in South Africa and we’re focusing on improving governance, finances, service delivery and the skills of health workers,” says Dr Manala Makua, the department’s acting director for women, child and sexual and reproductive.

Meanwhile, some breast cancer patients – like Regina Masetla from Limpopo – die before they even get a chance to get treatment in government hospitals.

Age is no protection

In November 2011, Jenna Skews was sitting at home studying for her final Grade 11 exams. She was playing with her necklace when she brushed her breast and felt a lump. Skews was only 17 years old. “My first reaction was to phone my mom. She comforted me by saying it was probably nothing but she still took me to the doctor for a check-up,” she remembers.

Her doctor performed an ultrasound and biopsy and referred her to see a specialist. The results showed she had a large lump which was removed at the beginning of her matric year. On a Saturday morning a few weeks since her surgery, the specialist told her that her lump was cancerous and it was a rare form of cancer called a sarcoma.

According to the United States-based medical research organisation Mayo Clinic, a sarcoma is a form of cancer that begins in the connective tissues of the body.

It is rare for breast cancer to be found in the connective tissues, as common breast cancer cells are typically found in the ducts and glands of breasts. Her doctor told her that she would need a mastectomy, a surgery where her breast will be removed.

“I was completely shocked. I didn’t even know what the word mastectomy meant,” Skews says. “That’s not what you’re concerned with when you’re in mat ric.”

A week later, her left breast was completely removed. On the same day as her mastectomy, her doctor also performed reconstructive breast surgery. Skews says she was fortunate enough to be able to afford to rebuild her breast. Three years after her first reconstructive surgery she also removed her right breast, which was natural, in order to match it with her left one.

There’s stigma around having breast cancer when you’re young, says Skews. Sometimes women think there is something they may have done to cause the cancer.

“The problem is youngsters don’t think breast cancer can happen to them,” says Professor Carol-Ann Benn. She is one of the leading breast cancer experts in South Africa and the Clinical Director of the Helen Joseph Breast Care Clinic in Johannesburg.

Benn says she sees more young women with breast cancer at the clinic than researchers have documented in the United States. “I might have skewed data because the clinic specialises in breast cancer,” she admits.

Most lumps in young women are not breast cancer, Benn says, but a breast ultrasound must be done and if the lump looks concerning then a doctor must do a needle biopsy to find out what it is. If the results of the biopsy are not concerning, patients will have to come for a three-month follow-up to see if the lump has grown.

According to a 2017 study published in the Lancet Oncology, breast cancer is the most frequently diagnosed cancer in women between the ages 15 and 39 years across the globe. Although breast cancer is not a common disease in this age group, it is the leading cause of death of women in high-income countries. Young women are also less likely to comply with treatment.

Only half (49%) of close to 8,800 patients with early stage breast cancer fully completed their prescribed regimen of hormone therapy, according to a 2010 study published in the Journal of Clinical Oncology.

Researchers examined records of women diagnosed with stage I, II or III, hormone-sensitive breast cancer in North Carolina, United States, between 1996 and 2007. Doctors often prescribe up to five years of oral hormone therapy to reduce the risk of the cancer recurring and death. Women younger than 40 years were 50% more likely to discontinue treatment than women between the ages of 50 and 65 years.

Benn explains: “Because a lot of the cancer treatment puts women into menopause, young women tend to be less compliant on their treatment.” The study says side effects caused by the treatment such as joint pain, hot flashes or fatigue, a lack of understanding of the benefit of treatment and the high costs of medication contributed to the lack of adherence. 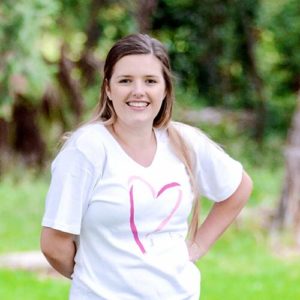 Jenna Skews was diagnosed with breast cancer when she was 17. Her breast was surgically removed at the beginning of her matric year. (Image courtesy of The Breast Health Foundation)

Pink. It’s on the couch, the banners and even the walls. Only the waiting room chairs and desks have been spared the delicate colour inside the Helen Joseph Breast Care Clinic. This is where Benn runs the world-class breast care facility. The chairs are filled with women with all ages. There are no empty seats. It’s Thursday, which means all the patients are here for a follow-up appointment. They have been recently diagnosed with breast cancer and will be initiated onto treatment.

Dludla is in one of the offices preparing to have one-on-one sessions with some of the patients. She’s now a Senior Patient Navigator at the Breast Health Foundation — the organisation that supported her through her treatment 10 years ago. “I wouldn’t be here if I did it alone, talking to people who understood what I was going through kept me strong and motivated for treatment,” she says.

Dludla says having the emotional and social support during her treatment can be the difference between life and death.

Benn agrees: “Peer counselling is so important. For example, my patients in my government unit are more compliant than my patients in my private unit. They are getting up early, catching taxis and travelling long distances to come on and get their treatment. And when they get here, they find people who are ready to explain to them their treatment and walk this difficult journey with them. We have to make it easier for people to be compliant.”

Having a peer counsellor — someone like Dludla who is also a breast cancer survivor — can significantly improve the well-being of a patient recently diagnosed with breast cancer, found a 2016 study published in the Cancer journal.

Skews also works at the Breast Health Organisation. Although she didn’t go through chemotherapy or radiation, having breast cancer so young was incredibly difficult. “I found the support and community I didn’t even know I needed. I was around people who understood what I’d been through,” she says. “And now, I try to give others the encouragement that I once received.”

An edited version of this story was published by The Daily Maverick.