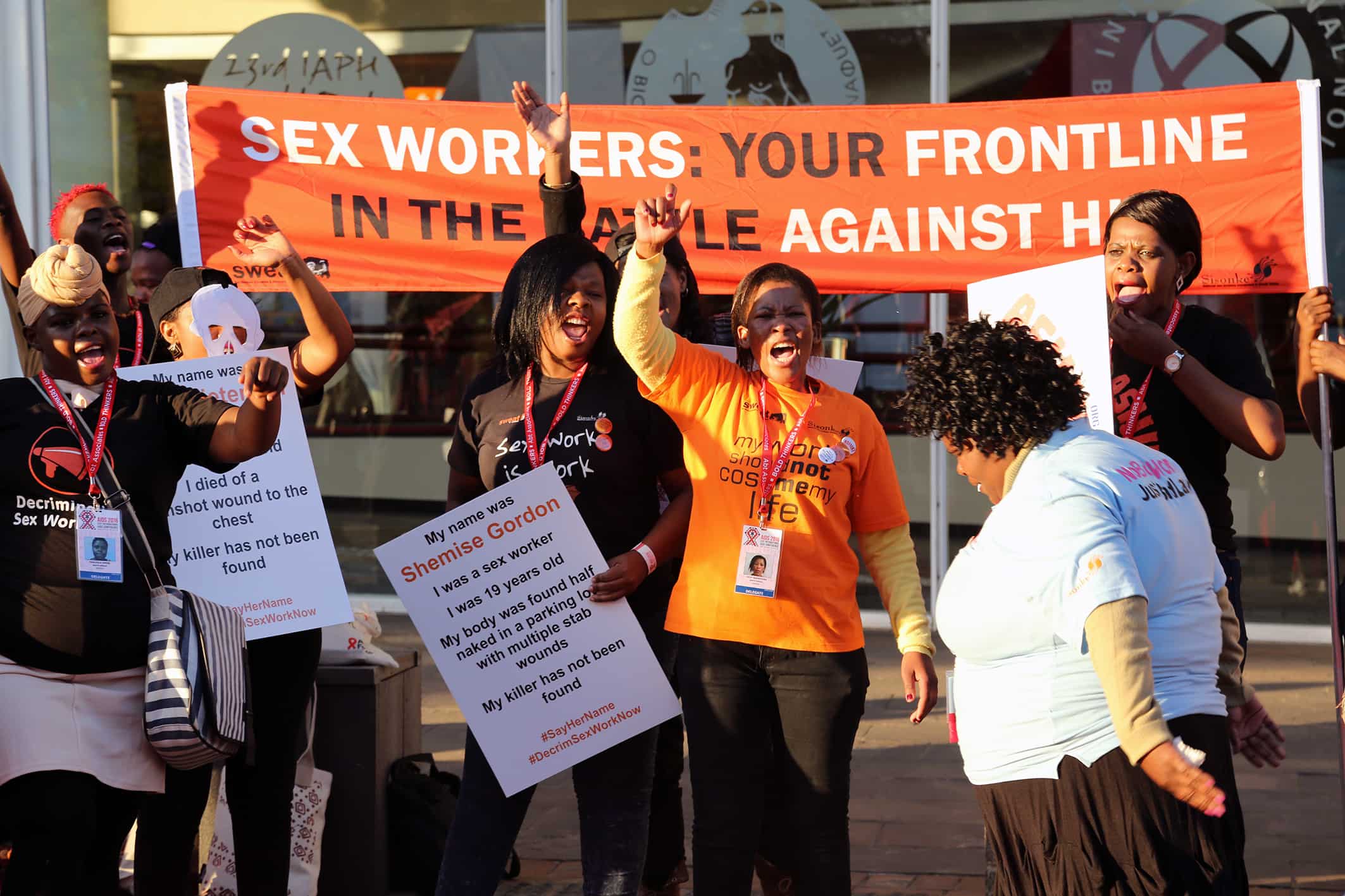 Do you know what your favourite political party’s stance is on sex work, gender-based violence and abortion?

So, what do the ANC, EFF and DA all have in common when it comes to sexual and reproductive justice? All three political parties have an “unclear” stance on supporting and advocating for the decriminalisation sex work in South Africa. This is according to the Sexual and Reproductive Justice Coalition’s (SRJC) latest campaign calling for the three major political parties to support an increase in the sexual and reproductive health budget for 2020 before voting day on 8 May.

None of the election manifestos concretely address reproductive issues, SRJC chairperson Marion Stevens argues. “(We know) what the ANC’s political position on sex work is, but we see a disconnect with the president’s commitment to the South African National Aids Council’s (SANAC) sex worker plan.”

The ANC resolved to decriminalise sex work at its 54th National Conference in 2017, meaning the buying and selling of consensual adult sex should not be considered a criminal offence. The resolution was welcomed by sex workers and activists across the country. So, what makes the ANC’s stance unclear? Stevens argues that its support for sex work has been muddied by the South African Law Reform Commission’s recommendation for that states sex work “should not be recognised as a reasonable means to secure a person‘s living in South Africa” and  “should not be considered to be work or decent work”.

This recommendation was made despite research showing a strong association between gender-based violence and criminalising sex work. According to a 2018 report by Sonke Gender Justice and Sex Workers Education and Advocacy Taskforce (SWEAT), a third of almost 60 sex workers who were surveyed said they have been raped or sexually assaulted by police.

As for the Fighters, its manifesto boldly declares that an EFF government “will legalise sex work by the end of 2019”. Legalising sex work — unlike decriminalisation — means the state regulates how the industry operates.

“We are not calling for legalisation, we want full decriminalisation. The EFF’s intention is great but their language is wrong,” says SWEAT’s media and advocacy officer Lesego Tlhwale. EFF is one of SWEAT’s allies, says Tlhwale, and they even asked President Cyril Ramaphosa during a question and answer session in Parliament in 2018 when he would decriminalise sex work.

But this fight has been going on for decades and depends on more than one political party.

In the meantime, “sex workers continue to languish and are unable to access sexual reproductive health services and are criminalised”, Stevens says.

Meanwhile, the DA plans to “explore the possible legal models around sex work” and “adopt an alternative legal framework that will reduce exploitation, abuse and rape of young women and men”. The party will prioritise forging close relationships with sex workers, the criminal justice system and civil society organisations that represent sex workers and their clients in order “to understand and apply the rights of sex workers”.

The SRJC used, among other records, parliamentary committee minutes and election manifestos to determine the political parties’ positions on issues such as abortion, sex work and comprehensive sex education. “We wanted to break down manifestos and look at the implementation plan (of each party) in Parliament,” Stevens explains.

Abortion is not mentioned in any of the three parties’ manifestos, but is an issue that has made its rounds in Parliament despite South Africa having one of the most progressive abortion laws. In 2017, the African Christian Democratic Party (ACDP) proposed amendments to the Choice of Termination of Pregnancy Act, including mandatory counselling before and after an abortion, showing ultrasound images to women contemplating abortion and outlawing abortions after 13 weeks.

The ACDP has attempted this numerous times. The health portfolio committee rejected the proposed amendments in September 2018. But the ACDP’s attempts to limit the access to abortion gave the SRJC insight into how political parties and their representatives in Parliament responded to reproductive health, says Stevens.

Access to abortion remains a problem, especially in light of the expansion of the US anti-abortion policy, the Gag Rule, that has forced NGOs worldwide (including in South Africa) funded by the US government to stop the promoting or performing of abortions. Health workers say they are unable to provide any kind of information on abortion to their patients.

As May 8 draws nearer, many South Africans are deliberating about which political party to vote for and why. In a time of continuously shocking revelations of State Capture, the Eskom crisis and high rates of unemployment, health issues tend to get little to no attention during election season.

But health care is political — especially in a country as unequal as South Africa where seven out of every 10 households use public clinics and hospitals as their first point of access when a family member falls ill or is injured. Long queues, medicine stockouts and poorly maintained and managed health facilities have become the norm in our country. 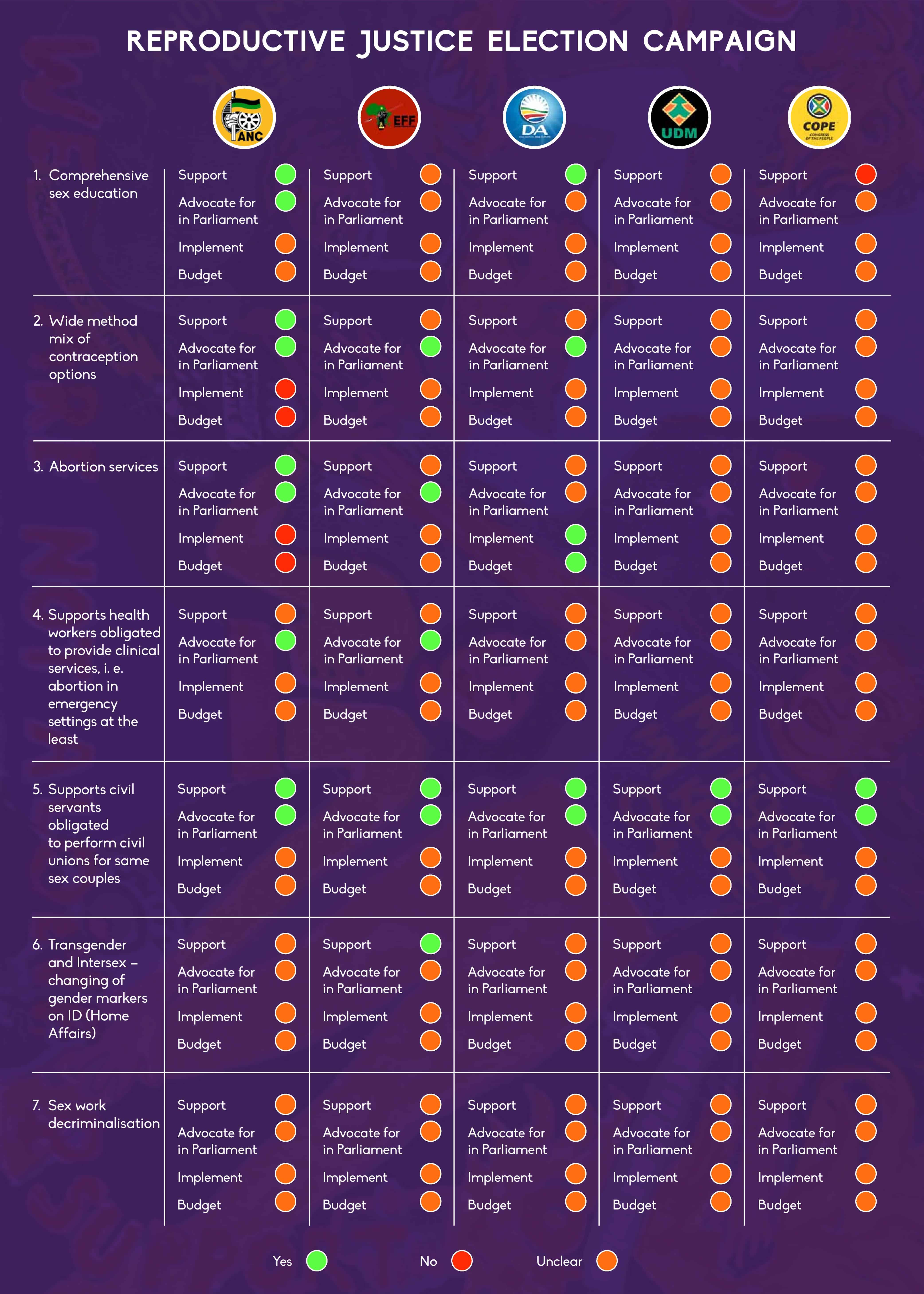 But systemic change has to take place alongside the adoption of the progressive policy. Take, for instance, gender-based violence. The ANC, EFF and DA agree that any kind of violence against women is a no-no and this is reflected in their manifestos. The EFF promises to develop “a whistle-blowing mechanism for reporting all instances of sexual harassment, jobs-for-sex and gender-based violence in the workplace”, the DA plans to establish Femicide Watch — an annual report on the statistics of gender-related killings and the ANC says it will implement a national plan of action to address the causes of gender-based violence (despite the many years of lobbying by activists and experts for one to be implemented).

Party leaders condemn gender-based violence at every chance, but after the recent allegation of sexual harassment against ANC spokesperson Pule Mabe, it emerged that the governing party does not have a sexual harassment policy. But nor do most of the other political parties — with the exception of the DA and Patricia de Lille’s newly formed Good party.

So how then can we trust those same organisations to effectively deal with the violence women face in this country — especially when some organisations, like the ANC, have known abusers such as Mduduzi Manana on their lists?

As I contemplate my own vote, as a young black woman in this country, these are the questions I’m asking myself: Are these political parties prioritising access to family planning and abortion? Do they believe sex work is real work? These factors are not only important to me, but determine the lives of others who are in worse situations than I am.