Five-year-old Shantel* is covered with eczema scars and has lived in isolation almost her life with a condition that could have been prevented if her local clinic had made the correct diagnosis when she was few months old.

Instead, the local clinic told Shantel’s mother, Thandiwe Ngubeni,  at several visits that her baby had a simple rash and she was given calamine lotion to apply.  It was only on her first birthday that Thandiwe found out that the little girl had eczema. Four years’ later, the little girl is still living with the pain due to the skin condition.

Ngubeni, 24, says she first went to Empandleni Clinic at Nkandla in KwaZulu-Natal, then we went to Mondlo Clinic 2 and later also to Thembumusa Clinic. The child was transferred to Vryheid Hospital and then sent to see a dermatologist at Newcastle’s Madadeni Hospital, only to be sent back to back to Nkandla Hospital again. 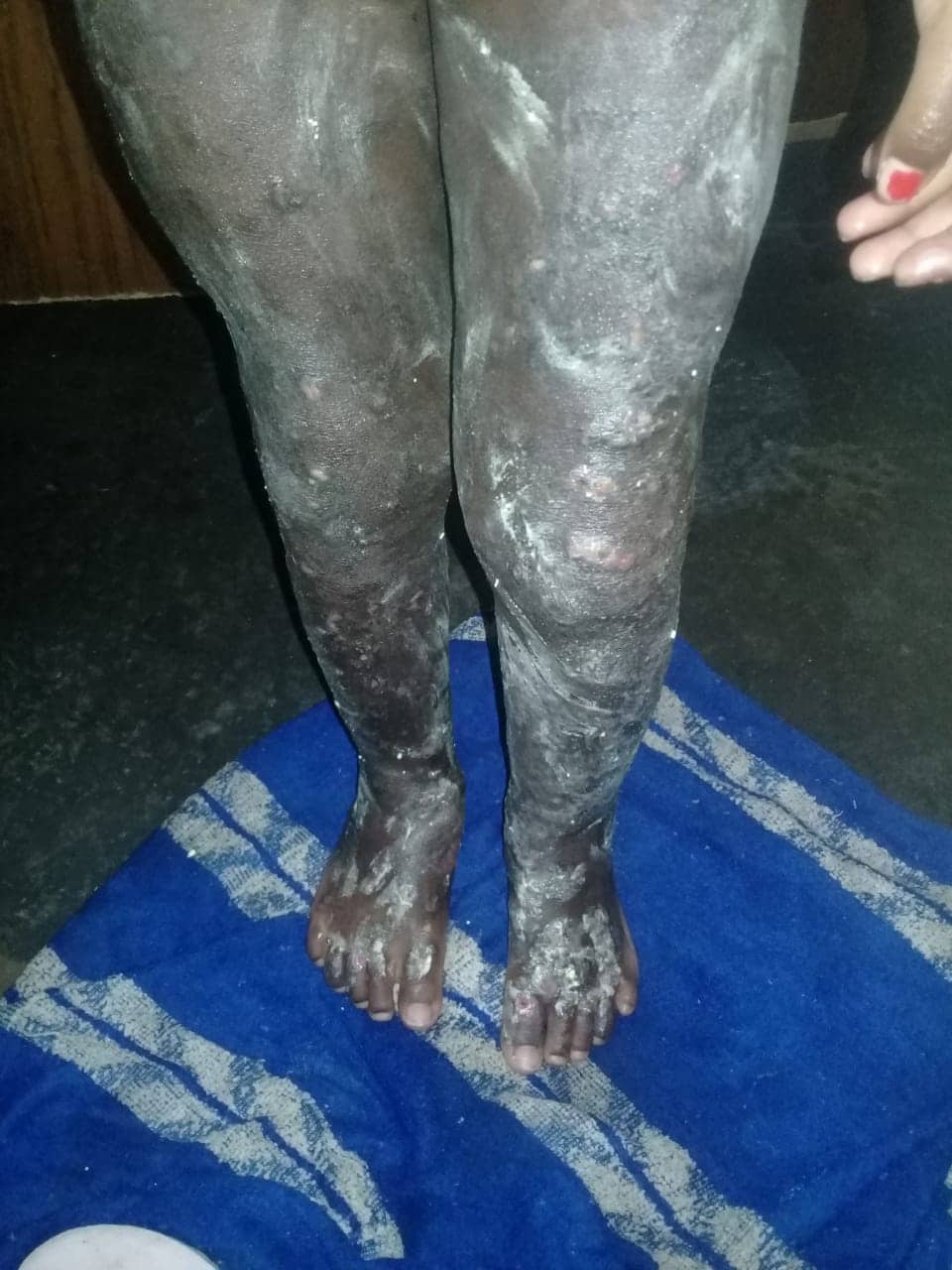 Shantel* who suffers from eczema has had a painful childhood. Photo: Cynthia Maseko / Health-e

“This has been a very difficult journey because this is my first baby and I was careless of taking care of a baby with eczema,” Ngubeni told OurHealth. “My child’s skin condition forced me to be with her 24 hours a day because her skin it’s always itching, dry and bleeding. Sometimes water came out from the sores. Sometimes her skin will be very wet and she will stay naked until her skin is dry then I can put on the aqueous cream before she wears clothes to avoid the clothes getting stuck on her skin.”

Ngubeni says other parents are often cruel and refuse to let their children play with Shantel because they are afraid that their kids might get her condition.

“I honestly believe that her skin condition has prevented her from making friends at home and school because she is afraid of rejection. Kids are constantly tormenting and bullying her for her appearance. What hurt me the most is the people say I infected her with HIV,” said Ngubeni.

Ngubeni says that nurses would often shout at Shantel who would cry out in pain when she would scratch her itchy body.  The desperate mother says she has often mixed ointments she got from the clinic with a traditional medicine called “Isibabuli” which she was told keeps the skin dry and stops it from bleeding.

Nurse Fikile Simelane says some patients still take short cuts of mixing their eczema treatment with muti thinking they would heal quickly: “ I know and understand that eczema is a painful skin condition but my advice patients with eczema or parents with kids with eczema is to make sure that they follow every instruction from clinic and hospital about who to use the medication they receive; because adherence is very important”.

However, for Ngubeni sticking to treatment from the clinic has not always been easy because of frequent medicine stockouts: “I will be forced by the situation to buy it at the pharmacy which is difficult because some of the medication needs a prescription from a doctor. But I don’t have the R300 to see the doctor and maybe another R300 something to buy the medication.”

Ntombifuthi Zitha, who is a sangoma, says eczema is also known as Ihlanga and believes it can be treated at an early stage by drinking traditional medicine which will work inside and outside the body but admits it is difficult to treat when it is already severe.

* not her real name.