HIV and tuberculosis (TB) drug stock outs have hit about 14 percent of health facilities nationwide in the last nine months, according to a new study released today by civil society coalition the Stop Stock Outs Project. 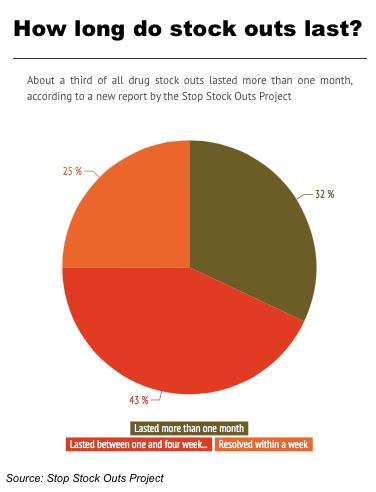 As part of its second annual medicines stock out survey, the project contacted about 60 percent of the country’s 4,200 health facilities nationwide between October and November 2014 to assess whether they were currently short of drugs or had experienced a stock out in the last three months.

The project found that a quarter of the about 2,500 health facilities surveyed – or about 14 percent of facilities nationally – had been short of HIV and TB medication in the last three months. About 17 percent of the sample surveyed also reported being short of medicines on the day of the survey.

According to the report released today at the SA AIDS Conference in Durban, the country’s once-daily three-in-one ARV, as well as the ARVs Zidovudine and Nevirapine, which given to babies born to HIV-positive mums to prevent mother-to-child transmission, were the most frequently reported drug stock outs.

About six percent of surveyed facilities reported a paediatric ARV shortage in the three months prior to the survey. The project’s results are slightly worse than those reported in its previous 2013 survey results.

“What the Stop Stock Outs Project has done is quantify what we previously only knew from an anecdotal perspective,” he told Health-e News. “Now we have data that shows the problem is a crisis and the Department of Health is pertinently aware of it, and knows what is going on and that millions of lives are being put at risk.”

According to the report, 80 percent of stock outs were due to poor management. [quote float= right]There is a new denialism brewing in South Africa. This is the denialism of our leaders…that fail to acknowledge the difficulties that our people face on a day to day basis

In about a third of all stock outs, health workers reported switching patients to less effective or more pill-heavy regimens – or sending patients home with less than a month’s supply of drugs

One trip to collect medication may cost the average patient about R120, according to previous studies conducted among ARV patients. With smaller supplies of drugs, patients must pay more to access care, the project points out.

Pamela Mantyi depends on pills and daily insulin injections to control her diabetes. She recently spent three months without being issued a full insulin supply, which meant she travelled more frequently to the Chiawelo Community Health Centre in Soweto and was forced to share insulin with her neighbour.

“I borrow from my neighbour, her daughter buys her medication,” says Mantyi, who adds that the shortage has meant her blood sugar has not been well controlled leading to frequent bouts of blurred eye sight. “When it happens, I can’t do anything.”

In the long-term, uncontrolled blood sugar can cause complications like permanent eye damage, blindness and kidney damage. Mantyi says she knows the condition can be a “serial killer” and adds she feels incredibly anxious during stock outs.

Chiawelo Community Health Centre verified that it continued to be out of stock of Mantyi’s insulin yesterday, according to the Stop Stock Outs Project.

A “new kind of denialism” 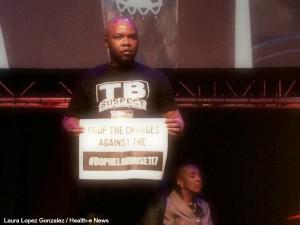 The issue of drug stock outs has loomed large over this year’s SA AIDS Conference, with activists from both major networks of people living with HIV, the Treatment Action Campaign (TAC) and the National Association of People Living with HIV, publicly calling on Deputy President Cyril Ramaphosa and Deputy Health Minister Dr Joe Phaahla to intervene.

Phaahla said the Department of Health had met with activists about the report and was trying its best to remedy stock outs. He added that there was “no major problem” in the availability of the country’s three-in-one ARV.

TAC Chairperson Nkhensani Mavasa said there was a growing “denialism” among government to admit to health system problems.

“There is a new denialism brewing in South Africa,” said Mavasa in her opening address to the conference. “This is the denialism of our leaders – particularly in health and in the provincial cabinets – that fail to acknowledge the difficulties that our people face on a day-to-day basis, the undignified conditions under which many of our healthcare workers do their duties and under which our people seek treatment.”

Provincial plans in the works

Gauteng, Limpopo, North West, and the Northern and Western Cape departments of health have already made public action plans to remedy stock outs in response to the report.[quote float= right]Limpopo has promised to establish “mini-depots” closer to clinics and call centres to facilitate stock out reporting”

As part of the plans, Gauteng has said it will award provincial tenders for medicines not on national contracts. Limpopo has promised to establish “mini-depots” closer to clinics and call centres to facilitate stock out reporting. The North West is set to source new contractors to medicines from provincial depots to facilities, and begin penalties for poorly performing medicine suppliers following similar moves by the Western Cape.

The report also recommends that provinces look to developing emergency medicine delivery systems like KwaZulu-Natal and the Western Cape.

“Our our supply chain is dependent on the capacity of human beings,” said project manager Bella Hwang who added that depots even lacked systems that would alert them when clinics had gone months without ordering drugs of vaccines. “We don’t, especially in the five worst performing provinces, have systems in place so when something goes wrong, it depends on one clinic manager to fix it.”

According to the Stop Stock Outs Project, the Eastern Cape, KwaZulu-Natal and Mpumalanga health departments have not responded to the report. The Free State Department of Health opted not to provide any plan, the project added. – Health-e News.