Home » Baby is brain-damaged and blind after alleged antibiotic allergy 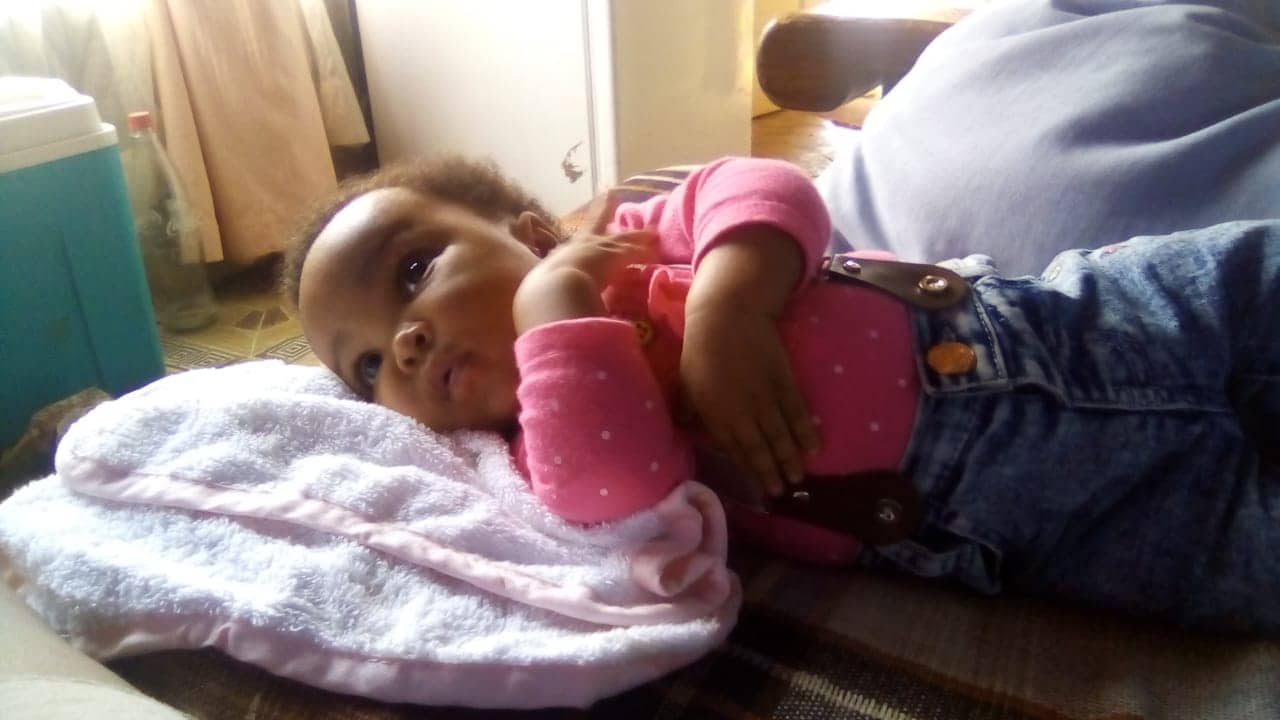 A five-month-old baby was left brain-damaged and blind after developing a severe allergic reaction from an antibiotic.

For the past two months, Vivian Mpambane has sat next to her baby, Zenande’s,  cot every day, all day in Ward 3 at Leratong Hospital on the West Rand.

Zenande, who was a born a healthy normal baby at Christmas time, is just five months old, and her mother now has to figure out how to deal with taking home a brain-damaged and blind baby covered in scars following her two-month ordeal at the facility.

“It all started on March 14,” says a tearful Mpambane.  “Zenande was vomiting and coughing and had diarrhoea, and her grandmother was worried that she would suffer dehydration and told me to take her to the hospital.”

She says her otherwise healthy baby was admitted to the paediatric ward and she hoped for the best.  She thought in a day or two and her baby girl would bounce back.

“The following day when I went to see Zenande with Vivian,” says a visibly emotional grandmother Anna Mpambane. “It was like the baby could not do anything.  She could not cry, she did not move. As if she was in a coma.”

Then around March 27, nearly two weeks after she was admitted to Leratong Hospital,  Zenande developed skin lesions that looked like acne all over her body.

Then the lesions burst, exposing the raw skin and Zenande’s mother and grandmother realised something was horribly wrong and they felt utterly helpless.

Vivian says she asked the doctors for an explanation but none was forthcoming although she overheard a conversation between two doctors who were attending to Zenande who appeared to be at odds over the amount of Bactrim being administered. Bactrim is a combination of two antibiotics, sulfamethoxazole and trimethoprim, that is widely used to treat bacterial infections.

During the conversation, Vivian says the one doctor indicated that he was upset with the other for administering a 3ml dose instead of a 1ml dose of Bactrim.

But Grey Dube, CEO of Leratong Hospital, denies the allegations.

“Throughout the treatment, Zenande’s mother was kept abreast. Although we don’t have an official record of a complaint from Zenande’s mother, our doors are always open for client feedback through the ward and our Quality Assurance Office,” said Dube.

He added that plans are underway to arrange further counselling for the mother as a means of support for her from Leratong.

But Vivian says the first time she was told that daughter was brain-damaged and blind was when the doctors referred her to a social worker, who broke the news.

“I couldn’t believe it and I didn’t want to hear it,” said Vivian.

The social worker’s report also has a note on it that reads: “Allergic reaction?”

According to the American Food and Drug Administration (FDA) website, fatalities associated with the administration of sulfonamide drugs are rare, but do occur; and severe reactions could include Stevens-Johnson Syndrome (SJS), is a rare disorder serious disorder of the skin and mucous membranes, usually in reaction to medication or an infection, and toxic epidermal necrolysis, a potentially life-threatening skin disorder characterised by widespread redness, cell death and decomposition, and detachment of the skin and mucous membranes, resulting in peeling, possible sepsis and even death.

Zenande appears to have had multiple reactions including anaphylaxis, a life-threatening allergic reaction which starved her brain of oxygen and which may have led to the brain damage and blindness, and possibly Stevens-Johnson syndrome at the same time.

SJS often begins with flu-like symptoms, followed by a painful red or purplish rash that spreads and blisters. Then the top layer of the affected skin dies, sheds and then heals as it is currently doing in Zenande’s case.

When Health-e asked the hospital to explain what had happened, Dube cited patient confidentiality and refused to comment on Zenande’s diagnosis.

“We can confirm that medication was administered according to prescribed dosage,” Dube wrote. “Despite the severity of Zenande’s condition, the hospital has and is continuing to do its best to treat and care for her. Over and above the involvement of our senior paediatrics specialist and our nursing staff, we have also had an allied multi-disciplinary team consisting of occupational therapists, social worker, physiotherapist, speech therapist and an audiologist treating her.”

The FDA notes that sulfonamides, including sulfonamide-containing products such as Bactrim, should be discontinued at the first appearance of skin rash or any sign of adverse reaction. It also recommends that complete blood counts be done frequently in patients receiving these antibiotics. It is not clear if these protocols were followed by the Leratong Hospital.

The hospital appears to have shifted the blame to Vivian, saying that she had told them her baby had been sick since January, an allegation she categorically denies. They also suggested that she missed a clinic visit, but Vivian told us she had taken her baby to a private doctor for a check-up instead.

A medical negligence lawyer who reviewed initial facts of the case felt that there could well be cause for a lawsuit and compensation.

But Dube has dismissed this: “According to our knowledge, there is no reason for financial compensation to the family. The lesson we are learning from treating Zenande and other patients is a need for strengthened communication with the public on the significance of adhering to a treatment plan which includes honouring medical appointments.”

But Vivian wants compensation as baby Zenande will have special needs.

Vivian has also lost her job because of her two-month vigil at Zenande’s bedside and she has had to take another child out of crèche because she can no longer afford the fees.

Her claim may have to join the list of cases being brought against the Gauteng Health Department, which at last reported count in 2018 stood at 1 597 cases totalling more than R22-billion. – Health-e News.