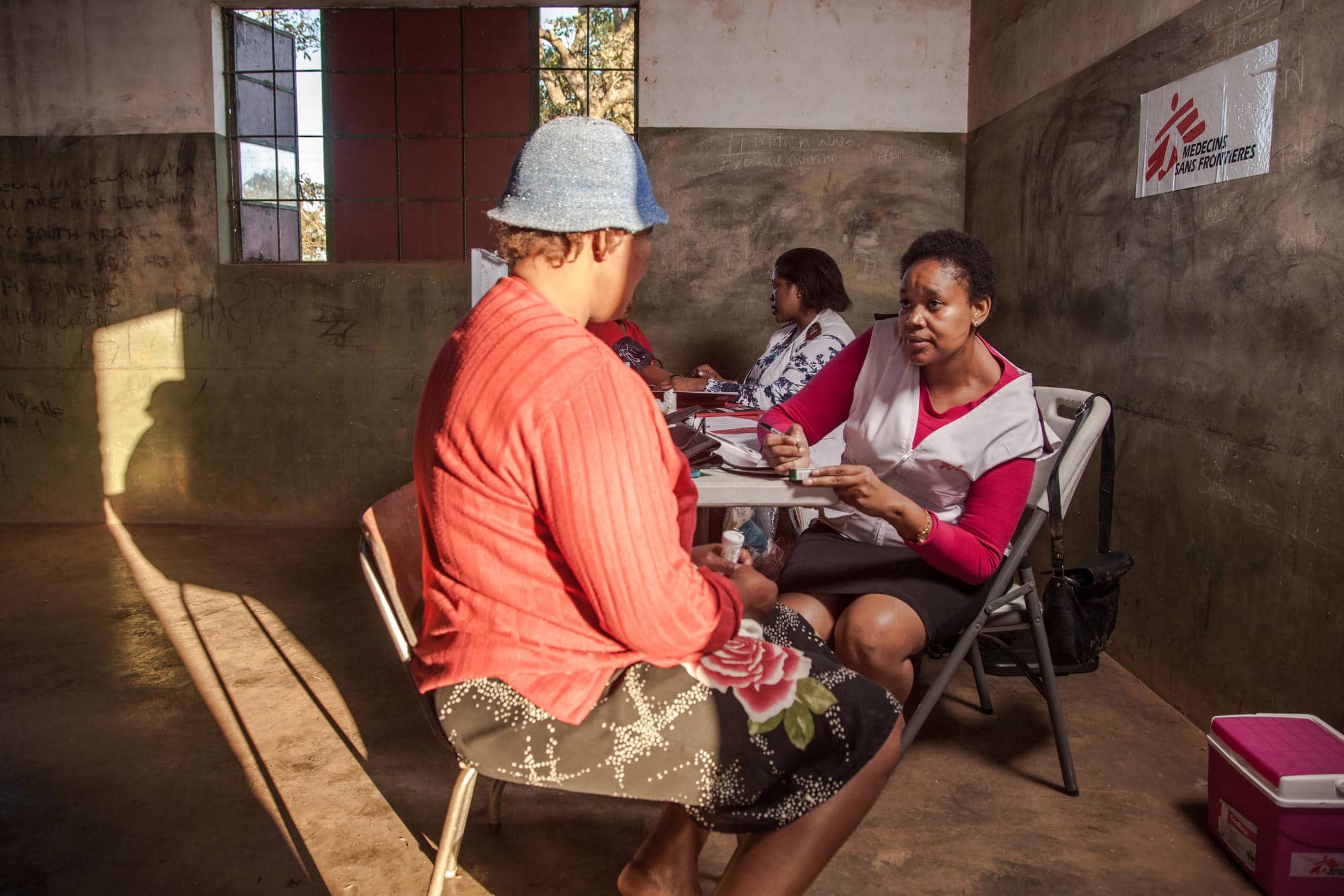 Medecins Sans Frontieres (MSF) nurse Gloria Galela attends to a woman working on a farm near Eshowe in rural KwaZulu-Natal. MSF is working to bring HIV testing and treatment to this key population group in the province, where HIV prevalence is among the highest in South Africa. Photo: MSF

People with a higher risk of contracting HIV still lag behind in staying on treatment and in the system.

Experts and activists at the ninth SA AIDS conference agreed that stigma was the biggest hindrance for patients and impacts on their ability to enter into treatment programmes or continue on ARV  treatment.

Stigma in many cases leads to people choosing not to look for health services tailored made for HIV patients.

According to epidemiology researcher Lindsey Filiatreau, access to healthcare is a major barrier to retention (on treatment programme) in young people between the ages of 15 to 24 years and, incidentally, this is also the largest group affected by HIV in the country.

Women between the ages of 20 and 24 are three times higher than among their male peers, the country’s latest HIV household survey found.

Speaking on the experiences of HIV-positive young women in rural areas of the country, Filiatreau said the most recent research has found that 60% of HIV-positive adults are on ART but only about 40% of young people are on treatment.

The reason behind this discrepancy was that young women are mostly in schools during clinics’ operating hours, she added.

“Young people are generally unable to get to the clinic to get the service they need during normal hours. This is particularly true for those facilities that do not offer extended hours or during weekends,” she explained.

While the HIV epidemic, particularly among young people, is concerning, other key groups still battle with access to health services that are specific to their needs.

Transgender people’s health risks are aggravated by a lack of targeted health programmes and limited number of healthcare workers who are skilled in transgender health.

Dr Luvuno Zamasoni, from the University of KwaZulu-Natal, said that in addition to the negative attitudes of nurses towards transgender people, language was also found to be a barrier. There was a need to introduce vernacular terminology in healthcare facilities so that the needs of this group were properly met, Zamasoni said.

Her research on trans patients’ treatment by health workers showed that cultural and religious beliefs were put forward by nurses as part of the reasons for difficult interactions with transgender patients. She found that transgender health must be included in the pre- and post-service training of healthcare professionals.

“We need to develop policies and training for health workers which will include sexuality and sexual populations urgently. This will develop a better understanding for healthcare professionals which will lead to better experiences for [trans] patients.”

When transgender patients visit a health facility there is confusion among health workers, she added.  As result patients avoid healthcare services because of the treatment they receive.

Another key population group facing difficulties managing their HIV status is former inmates. A study by the Aurum Institute found that ex-prisoners did well on treatment while they were incarcerated, but this changed drastically after they were released.

Researcher Nasiphi Mqedlana attributed this to the fact that women who had been in jail did not want to reveal their criminal past and were reluctant to take transfer letters that indicated that they had been in prison to a healthcare facility. – Health-e News