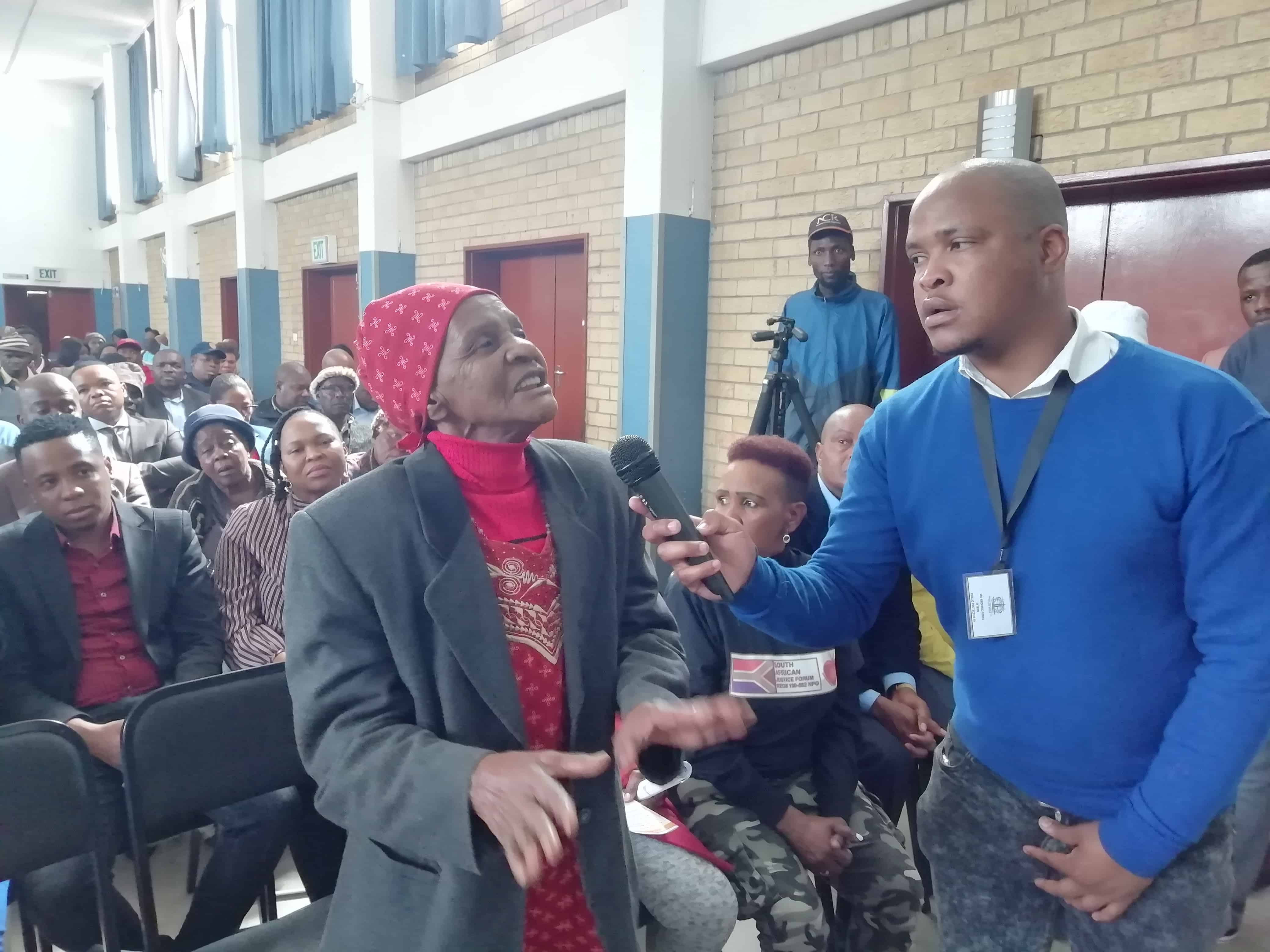 “Ever since I moved back into my house six year ago, life has been difficult,” says Mita Mokape.

Mita Mokape (78) has been living with sporadic electricity supply for at least six years. She says it has affected her mental well-being and put her safety at risk. The blind elderly woman from Tembisa, Ekurhuleni lost her sight in 2001 as a result of glaucoma, a condition where the nerve connecting the eye to the brain is damaged, causing blindness.

The loss of her vision has been the least of her worries since she moved back to her home that she had been living in since 1972 following an eviction.

“Having to use a paraffin stove to cook or make tea has not been easy especially because of the fumes that I sometimes choke on. My life has been drastically affected by it, it has left me feeling depressed and helpless.”

According to her, her house was sold without her knowledge and the new owners evicted her. But the community fought against the eviction and vowed to prevent anyone else from occupying it.

“I don’t even know how the house was sold because I had been living here since 1972. I got evicted and the community fought hard for my return to my house, but when I returned, things were no longer the same and life as I knew it, had changed.”

Mokape has been relying on the free basic electricity that the municipality provides to households but it’s a small relief because it doesn’t last for the entire month.

“I have learned to make do with what I have. The free electricity lasts for at least 15 days and after that, it is back to darkness. I am unable to buy it because the municipality cuts you off if your rates don’t get paid. The other owner has not been paying them and I can’t pay either since the account is not in my name.”

Despite not being able to buy electricity, she receives two municipal account statements every month, one in her name and the other in the other owner’s whose name is known to OurHealth.

“This is the confusing thing about this entire ordeal. Why do they send two statements, yet they know what has been going on with this house?” asks Mokape. 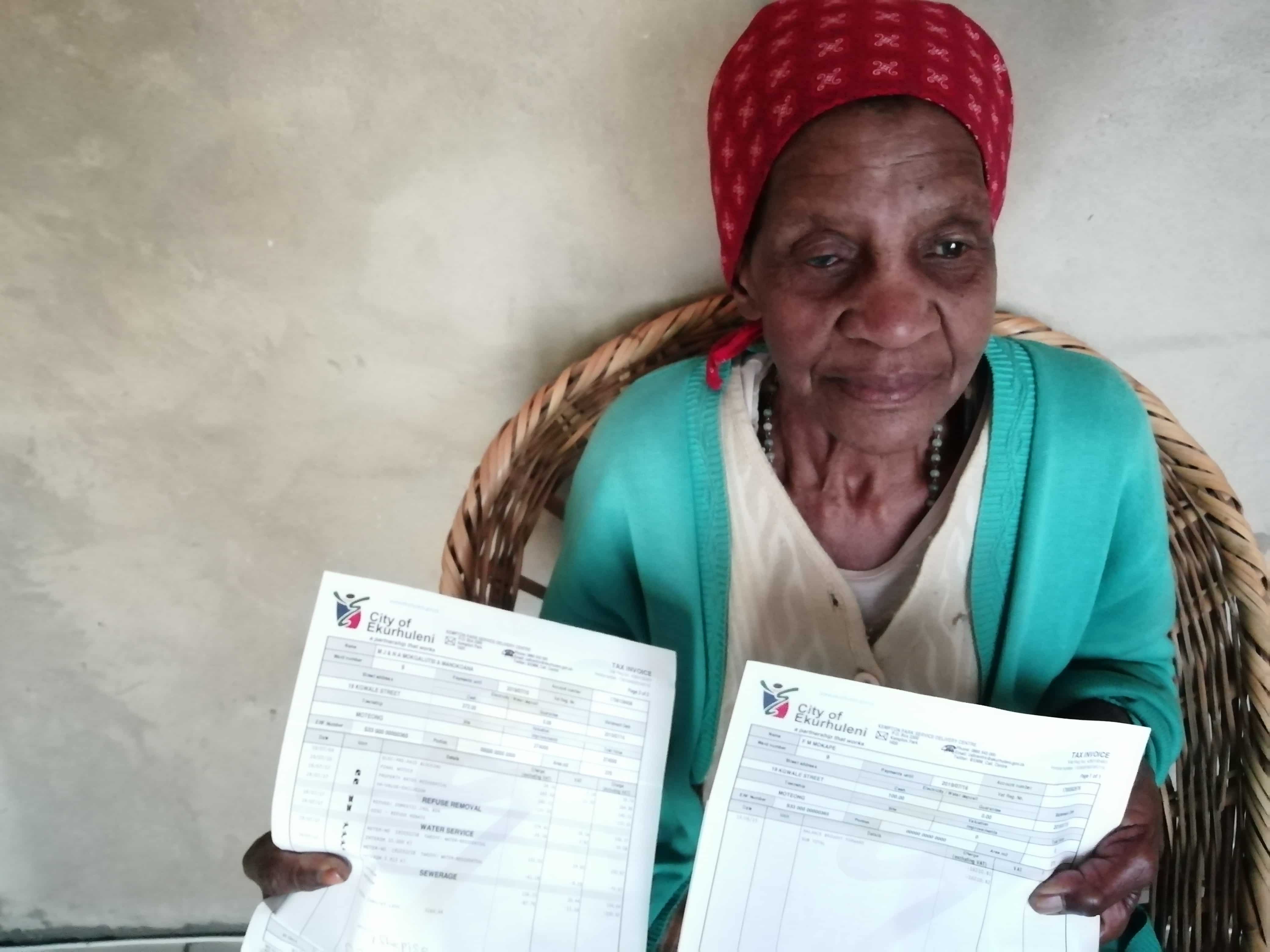 City of Ekurhuleni spokesperson, Themba Gadebe says that the city would not get involved in a dispute.

This is despite a commitment that Mayor Mzwandile Masina made to resolve the matter and ensure that Mokape at least gets the electricity issue resolved.

“I was hopeful when the Mayor spoke in front of the Public Protector and the community that my issue would be resolved. I am still waiting for them to come to my house as they promised. This is making me more anxious and stressed about ever having a normal life like everyone else. I am tired of using paraffin and it has affected my health.”

Gadebe says that only one account is active and there is nothing that the city can do to assist her.

“There is only one active account and it was registered in the property owner’s name in 2009. One of the criteria on indigent policy is ownership of the concerned property and in this case, she is not the owner in terms of the records,” he says.

Depending on the kindness of others

Suzan Makwatsane (74) has been friends with Mokape since they both moved into the neighbourhood in the 70s. She has been assisting her friend and neighbour with most of her needs since 2014.

“When she returned, she was already blind and I have been helping her clean the house, grocery shopping when we both receive our old age grant and I sometimes cook for her, especially when she has run out of paraffin.”

She says that she is mostly concerned about Mokape’s safety.

“What most worries me is that she might one-day spill paraffin on her clothes while pouring it inside the stove. It is a highly flammable substance and she might end up setting herself alight. Another thing is that most people know that she’s blind, lives alone and doesn’t have electricity so this makes her vulnerable to criminals.”

Makwatsane’s appeal is that her neighbour and friend gets reconnected so she can be able to buy electricity.

“I know that they might not be able to help her get the house in her name but I’m hoping that they can at least reconnect her. She’s old, fragile and needs something that will lessen the amount of stress that she has been going through over the years,” says Makwatsane. – Health-e News