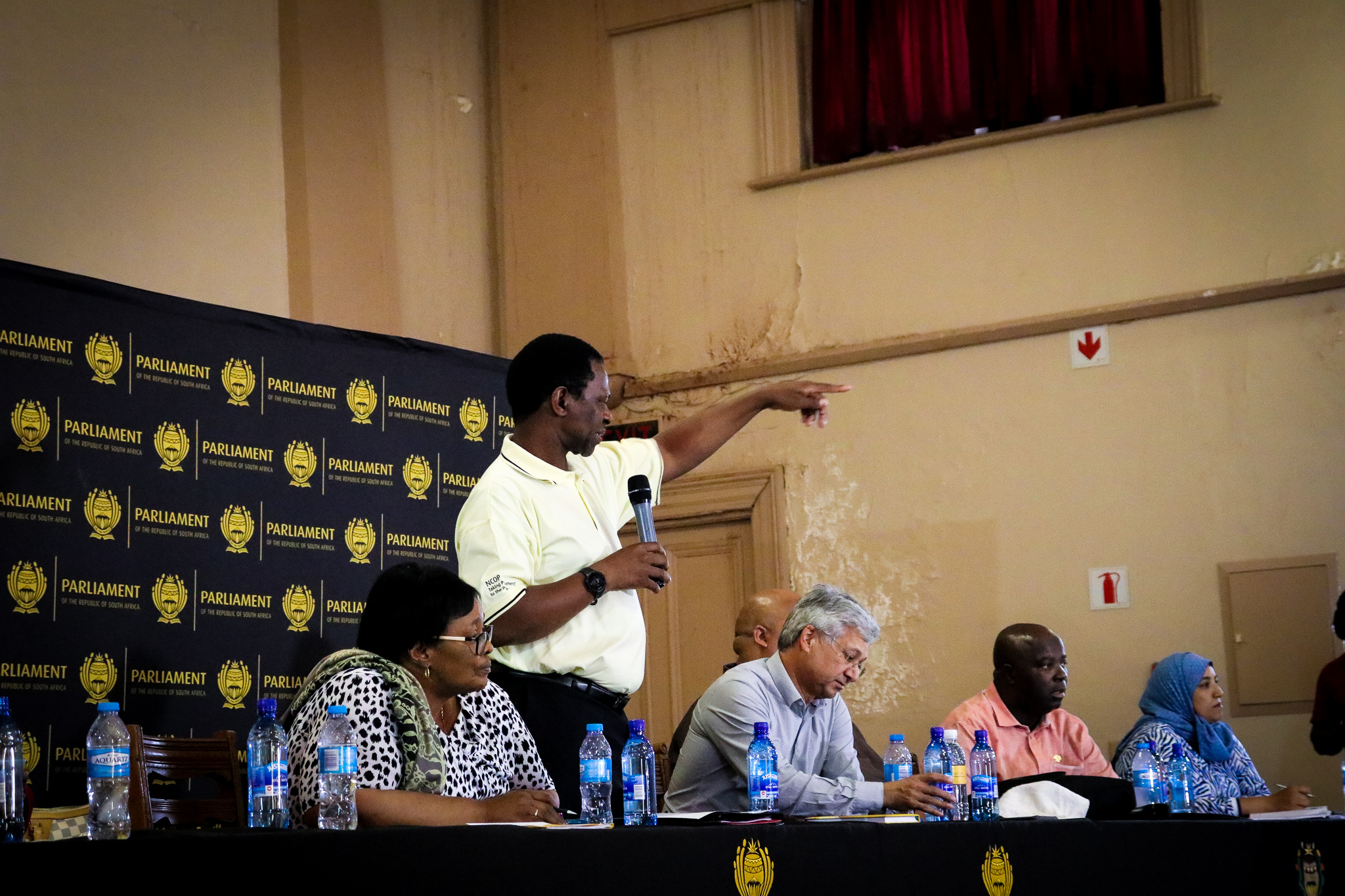 Chairperson of the parliamentary committee on health Dr Sibongiseni Dhlomo, with other members of the committee.(Photo Credit: Health-e/ Luntu Ndzandze)

The proceedings in Piketberg and Khayelitsha highlighted the cries of farmworkers and people living in townships.

The Western Cape government often prides itself on its public healthcare infrastructure and system being the best in the country — but its users have painted a different picture at the National Health Insurance (NHI) Bill public hearings.

This week, parliament’s portfolio committee on health listens to the views of Western Cape residents on the draft National Health Insurance Bill.

A little town called Piketberg, in the West Coast District Municipality, was the first to host the committee. Unlike previous hearings in other provinces, this hearing had only one representative from the provincial department of health. Chairperson Sibongiseni Dhlomo told the representative that they need to account for the progress of these complaints, when they face the committee in Parliament.

The hearings revealed that the quality and accessibility of healthcare for farm workers and black people is severely constrained by racial and class prejudices.

One unnamed resident submitted to the committee that he believes the district municipality’s healthcare system needs transformation.

“There are people dying all over. We cannot have medical help for the few privileged people,” he says.

Another submission from a resident notes that farm workers need proper access to medical services. He says that healthcare services need to be designed for the needs of farm workers — both seasonal and permanent. He adds that the community has lost faith in the local hospital to such an extent that they have dubbed the local hospital the ‘Never come back hospital’.

Akhona was the last to speak at these hearings, and says that medical help is denied to Xhosa people in Piketberg. She believes that because of her race, she is subjected to inferior healthcare services.

She told the committee of how her brother died due to medical negligence at the local hospital. Her brother was bitten by a snake and she rushed him to the clinic, but upon their arrival, healthcare workers refused to treat him and accused them both of being drunk. After begging the clinic staff to call an ambulance for them, she faced difficulties with the doctor, who refused to give her brother medical assistance, and told her that he only had 30 minutes to live.

Like the community’s name explains — he never came back.

Some residents in Khayelitsha share Akhona’s sentiments about the link between access to good healthcare and race.

Khayelitsha CBD Hall was packed to the brim with community members, political party supporters, health workers and activists, which led to lively and robust discussion about the Bill.

Beth Engelbrecht, Western Cape Health’s head of department, was present at this leg of the hearings. Engelbrecht didn’t stay until the end of the hearings, and chairperson Dhlomo alluded to the fact that accusations made during the hearing raised safety concerns for the department.

One such accusation came from Fadilah, who says Engelbrecht should be ashamed of herself for misinforming people about the NHI. Vovo, a member of the local health forum, alleges that the MEC of Health, Nomfrench Mbombo, is trying to “brainwash people against the NHI.”

Besides these accusations, the stand-out issue at this public hearing is the level of inequality in the Mother City.

While showing support for the NHI, one resident says:

“Cape Town is like Europe and Afghanistan in one city — and addressing inequality is long overdue!”

Another resident pointed out that most of the people who rejected the bill don’t come from Khayelitsha, and so can’t comment on the lived experience of public healthcare users in the area.

Wiseman Mphepho says the following, building on this point:

“No white people reside in Khayelitsha, but its white people who come here and tell us they reject the NHI. People with our lived experiences in Khayelitsha support the NHI Bill and we will not listen to anyone who doesn’t know the poor living conditions of our people. I prioritise people’s lives and health before profit and, therefore, support NHI.”

Throughout the course of the night, political party supporters took centre stage, and at one point, the hall was filled with booing from political opponents.

Lonwabo Mqina says that “it is painful that political parties are playing ball with our lives.”

“I am pleading with political parties not to make that mistake. We need the NHI as South Africans. We don’t need political battles.” – Health-e News