Home » News Articles » #LockdownSA: ‘Some of us will die of hunger’ says Limpopo beer brewer 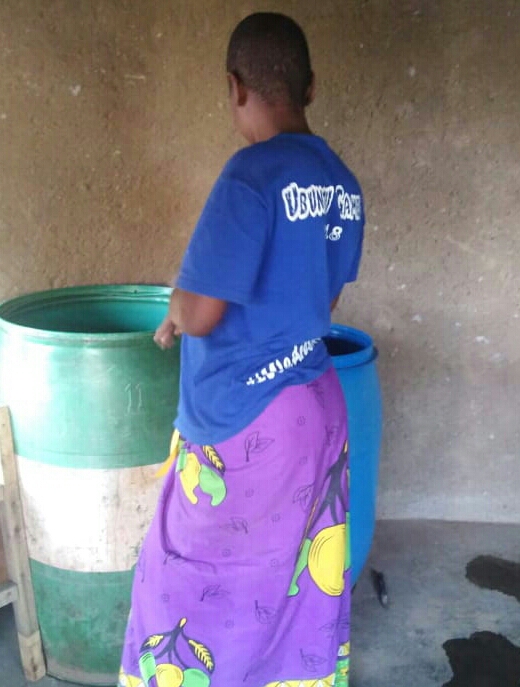 Azwinaki Mathelemusa standing next to the droms she use to store traditional beer after brewing:Cedit(Ndivhuwo Mukwevho)

In a small village outside Elim, Limpopo, the shockwaves of the national lockdown are being felt by those most vulnerable to capitalism’s precarity.

#LockdownSA: ‘Some of us will die of hunger’ says Limpopo beer brewer

“The moment the lockdown was announced, I knew that I was set for the longest 21 days of my life — with no food or income. I had already spent all the money I had to buy all the necessary ingredients to brew mahafhe [traditional beer].”

Azwinaki Mathelemusa, a 42-year-old mother from Mashamba village, Limpopo, recounts what went through her mind when the 21-day national lockdown was announced by President Cyril Ramaphosa. Whilst others in the village hastily stocked up on food and other essential items, Mathelemusa wept.

She makes and sells mahafhe, a traditional sorghum beer, to her fellow villagers. It’s through this that she makes an income for herself and her three children, two of whom are studying at tertiary institutions. She makes about R3000 a month, most of which goes to her children’s accommodation and fees — the rest of her income goes straight back into beer brewing.

Although Mathelemusa supports the lockdown, understanding that it’s a vital way to flatten the curve of Covid-19’s spread in South Africa, she says that informal traders, such as herself, were not given enough time to prepare for life in lockdown.

“The night that the president announced the country will be going into a lockdown, was the same time that I just started brewing the traditional beer. The beer is only set to sell after three days — which coincided with the first day of the lockdown. I was unable to sell the beer and had to pour it on the ground,” says Mathelemusa.

The single mother of three who has been brewing and selling traditional beer for over 16 years — and in that moment, after losing the money she had made previously on wasted stock, she felt hopeless.

“I know that the government is trying to protect us from the virus, and I support their call. But some of us will die of hunger as we have nothing to eat at the moment. It’s my number one worry,” she says.

Relief funding not an option

Small Business Development Minister, Khumbudzo Ntshavheni, recently announced that 81 000 small, medium-and micro-businesses had registered on the government’s relief database and that about 2000 applications have already been received for relief funds. She further said that there are certain criteria small business owners need to meet, such having been operational by 29 February this year, and being tax-compliant. But, Mathelemusa’s business doesn’t make the cut — her business has no documentation, and she operates from her home. Most importantly, the sale of alcohol is forbidden during the lockdown period.

“Brewing and selling traditional beer is the only job I have known since I was in my early twenties,” Mathelemusa says.

She was taught how to brew the beer by her mother when she was still a teenager. Currently, her children have to resort to eating a single meal a day, to try to save the little food they have.

“It’s hard waking up in the morning not knowing what you’re going to eat. Basically, we’ve been surviving through handouts from our fellow villagers, who care enough and value our survival,” she added.

Due to lack of extra-mural activities and jobs in the village, some community members spend long hours of the day drinking traditional beer — as has become a norm in most rural villages within the Vhembe district. A single cup of the beer costs around R3, which makes it easily accessible to villagers who usually gather at the homes of beer brewers to consume it all day.

Thifhelimbilu Begwa, who regularly drinks mahafhe, says that spending a week without indulging in his favorite beer has been tough — it’s the first time in years that he’s gone a day without drinking traditional beer, and he’s trying hard to survive.

“I thought I was going to die last week, because I have been drinking mahafhe daily for years. Last week was my first time spending days without a drop of beer. I am trying to keep myself busy at home so that I do not think about it, and so far I have been able to survive. If I manage to go through the whole 21 days without drinking the beer, maybe it will be time I consider quitting the beer,” says Begwa.

The Thulamela Local Municipality in Vhembe has since announced that all hawkers and spaza shops are allowed to trade, but this is with the proviso that hawkers only sell fruits and vegetables, while spaza shops are expected to sell small items that are stipulated on their licenses. — Health-e News.