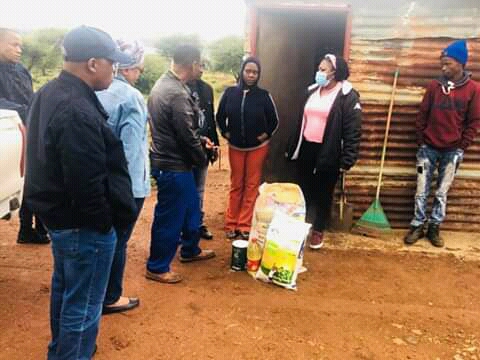 It is vulnerable groups in society such as the elderly, poor, and unemployed who are most affected when global pandemics such as Covid-19 take place. But various sectors in the country have come together to lessen the impact.

With South Africa’s high unemployment rate, most people in the country can’t afford to buy essentials like basic food items and hand sanitiser in order to keep healthy and prevent the spread of the virus.

Poverty-stricken community members in the North West tell Health-e News that they appreciate government efforts aimed at ensuring their wellbeing during these difficult times.

Mary Mosala (45) from Manokwana Village near Taung shares a one-bedroom shack with four other family members. They depend mostly on a social grant to buy food. She recently received a visit from the North West Department of Social Development and was handed a food parcel.

“We are really grateful for the visit from government and the food we have received. I normally go out and look for piece jobs to feed my family but now because we have been told to stay in our homes to prevent the spread of the virus [so] I am forced to stay indoors. I am really happy to have received this food parcel and it will keep us from going hungry,” says Mosala.

Elisa Mooki (27) from Jouberton near Klerksdorp lives with her younger sister and two children in a RDP house. They also depend on social grants to buy food. Mooki has welcomed the food parcel which government handed over to her family.

“Ever since our parents passed away, life has been difficult and I have had to look after my younger sister. I am currently unemployed and we depend on social grants in order to survive. This food parcel will add to our grocery because our food gets finished quickly because the children are no longer eating at school – they also have to stay [at] home due to this lockdown.

“I appreciate the efforts taken by government and I hope that they will reach more households which are affected by poverty across the country,” says Mooki.

Spokesperson for the North West Department of Social Development, Petrus Siko tells Health-e News that they are doing their best to ensure that vulnerable groups are protected during these difficult times.

“[Thus] far we have distributed nearly 2 000 food parcels across the province. We also enjoy support from the private sector and NGOs. The department intends on going to all four districts in the province to identify and hand out food parcels to those who match our qualification criteria.”

Siko adds that the department has also set up shelters for the homeless in Mahikeng, Rustenburg and Ventersdorp where they can stay during the lockdown period.

“We have set up shelters for the for the homeless at the Ben Marais Hall in Rustenburg, JB Marks Treatment Centre in Ventersdorp and the Mahikeng Secure Centre in the capital. Here we are able to feed, clothe and screen people who were living on the street before the lockdown period. Nursing staff are always available at these centres to provide the necessary health care around the clock,” says Siko

The department urges people across the province who do not have a stable income to contact a social worker who is designated to their ward or local councillor in order to receive food parcels from government. – Health-e News