Home » News Articles » Vitiligo is treatable but not curable 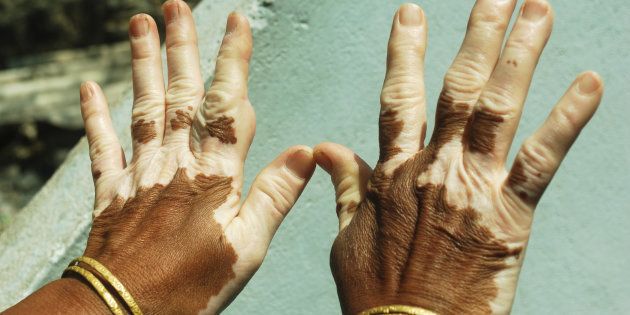 World Vitiligo Day falls on June 25 but it will be commemorated differently this year because of the Covid-19 pandemic.

Vitiligo is treatable but not curable

Dr Suretha Kannenberg, a dermatologist, describes vitiligo as a skin condition where skin loses pigment cells and it can result in discoloured patches in different areas of the skin and hair. She says the main reason a person develops this condition is by genetic predisposition.

Kannenberg says that there are three types of vitiligo which are segmental, non-segmental and mixed.

“Segmental vitiligo is found in specific nerve distribution and mostly it is usually [affects] children, non-segmental vitiligo is usually … symmetrical in areas of friction. There are various non-segmental types which are [on the] lips and finger tips, very widespread type, confetti type, trichrome, inflammatory, and so on. The mixed type is when vitiligo starts in segments and then spreads all over.”

People who have this skin condition usually experience anxiety and depression, lower self-esteem, and isolation especially if they didn’t expect it, says Tsietsi Kgwantha, who has been living with vitiligo for 15 years.

He advises people who have it to make sure they understand what it is. “After understanding it, make a choice that are you going to accept who you are or are you going to go all around looking for the medicine to cure it, which [there isn’t] yet for now. As for me, I have been using so many products trying to cure vitiligo, some did work but once I stopped using [it]; vitiligo would come again.”

Kannenberg says for now there is no cure for vitiligo but it is treatable. “Treat vitiligo as soon as possible, the sooner the better. Treatment will not trigger spreading of the condition plus treatment with anti-inflammatory is the only other thing that one can do to avoid the spread.“

She adds there are signs that people can look out for, such as an appearance of a milky white spot, which can sometimes itch or have a red border caused by the sun.

Sihle Miya has a daughter with vitiligo and she says she has gone to different types of doctors who have given them many ointments and medication which they believed might cure it, but nothing has worked.

“We even used different types of traditional medication as well, hoping that the condition will disappear but it didn’t work, instead we were told that what is happening to my daughter is caused by ancestors, some traditional healers would say she was cursed.

“But after trying many different methods of curing vitiligo, we gave-up, and learned to accept her condition as it is and gather all relevant information about this skin disease. That is where we realised that there is no such thing [as] a punishment from the ancestors. Now my daughter is living a positive life and proud of being different.“

Kannenberg emphasises that people with vitiligo are not cursed and adds it is good to get in contact with other people who have the same condition because knowing that there are other people with it is helpful.

On June 27, the Vitiligo Society of South Africa will host a live webinar with guests from all over the world talking about the condition. – Health-e News