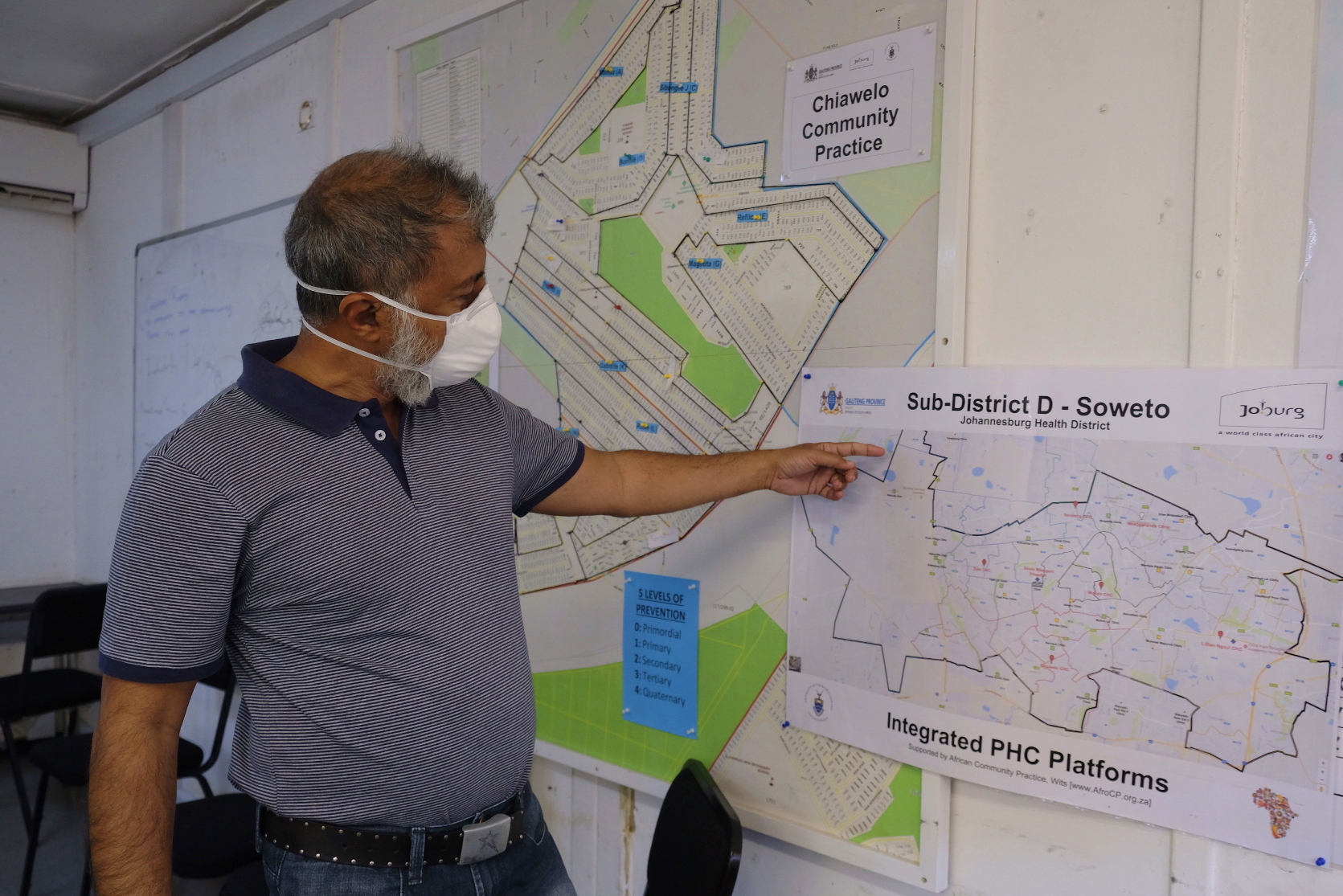 The Chiawelo Community Practice is an example of how a focused healthcare system and good record-keeping can lead to quality care for all – and Professor Shabir Moosa wants this model to take root across Gauteng.

Although critical of the public health system in South Africa, Professor Shabir Moosa believes good governance and structural innovations can bring about change. Moosa is a family physician in the Gauteng Department of Health and Wits University and has been primarily focusing his work on the Chiawelo Community Practice (CCP) in Soweto since 2014.

The CCP is at the end of a long corridor in a red brick building, identical to those around it in the Chiawelo Community Health Centre. What sets the practice apart from most clinics is that the waiting room is oddly empty. This isn’t primarily due to Covid-19, Although social distancing measures are in place.

Majority of patients at CCP do not wait in line from the early hours of the morning but come in for scheduled appointments. The 30 000 or so residents from the directly surrounding wards have been registered by community healthcare workers (CHWs) for this service. This creates a focused and exclusive system that resembles private healthcare and is intended to create a close and more effective link between the community and healthcare providers.

“The service here is not really very complex. All it is, is good record keeping,” says Moosa. Each registered family or household in the community has a file that includes a file tracking the CHW’s interventions, including problem areas for the patients and problem issues. “In all of that, we produce great content for the patient encounter but also for the quality of care.”

This model is one of the ways Moosa believes public healthcare could be streamlined and improved. He has run the CCP as an unofficial example of how the National Health Insurance could run, modeled partly on how doctors could function in such a system.

Shivani Pillay, who is a clinical associate at CCP and has been there since the beginning, says that, in the past, it has excelled when there have been enough staff resources on hand.

She says, “because it was working so well, they wanted to include more patients,” and this has put pressure on the site. Pillay explains that the practice’s community-oriented primary care (COPC) and family medicine approach means she is able to give more holistic care together with the CHWs.

In the public healthcare system as it is now, she says it would be more likely that she’s “managing their disease, not actually managing the patient.”

Moosa agrees, saying that “small units do hugely better.” He sees good COPC as “a cyclical outreach to the community.” One past successful example of this started in 2017 when the team realised there was a significant population of elderly residents who were sedentary and stressed. Together with the CHWs, small clubs were started across the wards that encouraged exercise, stretching, and personal connection.

“That alone became hugely successful,” says Moosa. About 150 people were meeting daily in clubs across the community, and this organically led to a variety of other initiatives including soup kitchens and non-governmental organisation support.

While Moosa believes his model at the CCP has great potential for widespread application, another aspect of his current work attempts to address his concerns about how the public healthcare system is structured and run in a more head-on way.  He has been running clinical governance meetings and leadership in the sub-district for the last two years following the establishment of the Provincial Clinical Governance Committee.

This means that managers from 29 facilities in the area, organised into clusters, meet every month to work on improving the performance of their services. Using the District Health Information Service, Moosa compares data from the different sites to see how the various health programmes and targets can be better run and coordinated.

He says, “many a time, managers sit but they’re thinking about management costs and their challenges rather than the patient outcomes.”

For instance, there was a practice of each clinician being expected to perform a few pap smears a day. However, the necessary equipment was not available in each room, which delayed the process. Instead, the clinical governance work suggested allocating one practitioner and room at the site where patients can go at certain booked times. Moosa said there was initially some pushback, but that over time practitioners were won over by how efficiently the system worked.

Moosa’s career started not in dense Soweto, but in Kokstad, a remote town in KwaZulu-Natal. He had over a decade’s worth of experience as a countryside doctor, before starting at University of Witwatersrand in 2014.

He brought a different perspective, thanks to his experiences with isolated farming communities in rural KwaZulu-Natal. He describes it as “coming from a rural background rather than a private GP background to sell the idea of family physicians in the district health service where it wasn’t there before.”

Shortly after that, he was instrumental in bringing family medicine departments into Gauteng.

It has been many years, and project successes and failures since. But, when Moosa stands in front of the maps on the walls of the CCP, pointing out areas and strategies for the community, it is clear that he has a passion for improving the status quo of public healthcare in Soweto, and the province at large. – Health-e News