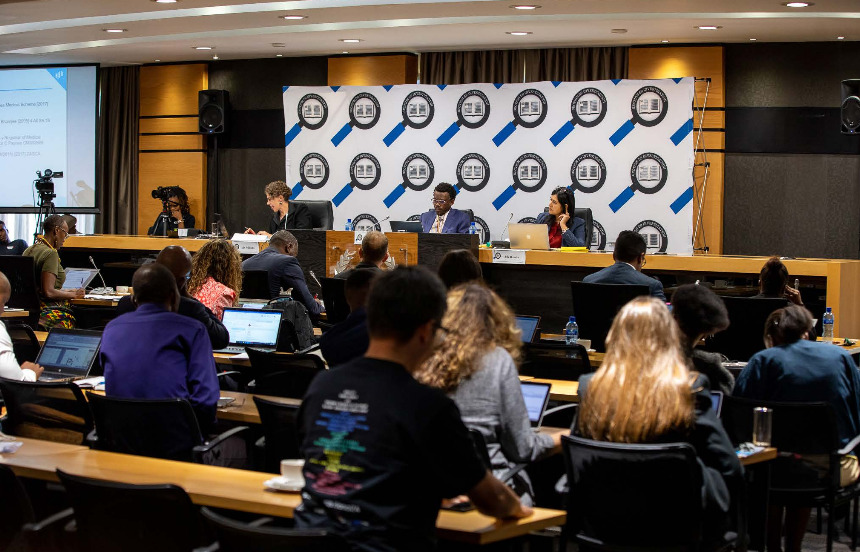 ‘Degrading, humiliating, and distressing’ – Section 59 investigation finds medical schemes racially profiled black health practitioners. The findings of investigation stemming from allegations from black doctors were released this week, despite attempts to block in in court.

Note- this story has been updated since it was published to include Discovery Health comment – Court action could not keep the damning findings of racial profiling of black doctors by medical aid schemes from public view.

A High Court judge has handed down a ruling ordering that a report revealing Medical Schemes racial profiling of doctors and health workers should be released to the public.

That was despite the Government Employees Medical Scheme (GEMS) and the Board of Healthcare Funders’ (BHF) eleventh hour attempt to halt the damaging release. In approaching the court for an urgent interdict on Sunday 17 January, GEMS and BHF claimed they had not been given an opportunity to comment on its contents before the public sees it.

Medical Schemes opposed the release saying they were not given the right of reply and that a public release would forever sully their names in public. Instead, Pretoria High Court Judge Colleen Collis ruled on Tuesday morning that the report should be publicly released immediately.

Allegations lead to an investigation

The report stems from an independent investigation launched by the Council for Medical Schemes (CMS) in 2019. Black doctors alleged that they were forced to hand over patient files when claiming from medical aids, which goes against Section 59 of the Medical Schemes Act.

In May that year, members of the National Health Care Professionals Association (NHCPA) and Solutionist Thinkers made public allegations that they were being discriminated against by medical schemes and administrators. They alleged that their claims were withheld based on their race and ethnicity. Medical schemes and administrators were making use of section 59 of the Medical Schemes Act (131 of 1998), to withhold payments to these medical practitioners once they had rendered healthcare services.

“Some of the current procedures followed by the medical schemes to enforce their rights in terms of 59 of the MSA are unfair, that black providers are unfairly discriminated against on the grounds of race and that there is unfair discrimination in outcomes,” the panel, chaired by Advocate Tembeka Ngcukaitobi found.

In an online report, the panel said it was mandated to investigate two main issues including whether there had in fact been racial discrimination by schemes against black health care providers and whether black providers were being treated procedurally unfairly. Black doctors alleged that their claims were dismissed as Fraud, Waste and Abuse or the FWA code used by medical schemes.

“After considering all the evidence and responses, we find that between 2012 and 2019 black practitioners were more likely to be found to have committed FWA than their non-black (White) counterparts, by Discovery, Medscheme and GEMS. This means, for the reasons provided in this interim Report, there was unfair racial discrimination,” the report concluded.

However the report said the computer codes used to probe claims were not found to have been racist.

“We do not find evidence of explicit racial bias in the algorithms (to the extent that the workings of the algorithms were disclosed) and methods that the administrators and schemes use to identify FWA,” it said.

Using data provided by Discovery, GEMS and Medscheme, the panel found there was “…a substantial difference in FWA outcomes between black and non-black practitioners over the period January 2012 to June 2019,” the report found.

“Black practitioners were 1.4 times more likely to be classified as having committed FWA than those identified as not Black, across the three schemes,” the report found. Damningly, the data found that the probability of this was purely by chance was near zero.

BREAKING | Some medical aid companies are guilty of “unfair racial discrimination”, as per findings of the Section 59 Investigation.
ON A SCALE OF RACIAL DISCRIMINATION: #Discovery 35%, #GEMS 80% and #Medscheme was 330% likely to “identify Black providers” as committing fraud.

Discovery Health in particular has found itself in the firing line.

“We are also concerned about an aspect of Discovery’s approach to calculating amounts to be clawed back as the approach may be disproportionately harsh on providers who are required to pay back amounts over a period of up to three years,” said the panel.

“We do not believe that this approach to calculating amounts owed is justifiable – this is particularly so where the schemes’ systems are capable of picking up unethical conduct or misdemeanours in a much shorter time and could notify providers that they are being flagged much earlier than is currently the case.”

In terms of South Africa’s constitutional rights, these forms of discrimination have led to major infringements.

“We had no power to find anyone guilty.” The panel concluded. “Nor were we appointed to investigate the veracity of each individual claim of unfair treatment and unfair discrimination.”

“But we would be failing in our duty if we ignored degrading, humiliating and distressing impact of racism against the individuals who testified before us. A part of our function was to provide a platform for the expression of individual experiences of racial discrimination and other forms of unfair treatment.”

The testimonies were live-streamed throughout the hearings.

In response to the report, Discovery Health issued a statement denying it had ever racially profiled GPs or other health providers. At the launch of the panel Discovery Health CEO Dr Jonathan Broomberg said: “I think just to make it clear, nothing could be further from the truth than the allegations that were made yesterday. These issues have got absolutely nothing to do with race, they have everything to do with fraud.”

Discovery Health has responded formally to the allegations with an emailed newsletter to clients. The full response is below:

We are writing to you today as Discovery Health and Discovery Health Medical Scheme about the release of an Interim Report by the Section 59 Investigation Panel on Tuesday 19 January 2021. A media conference was also held on the same day to announce the report’s findings.

We want to give you a bit of background on the issue and tell you more about the report.

The panel made the full 320-page Interim Report available to the Council for Medical Schemes (CMS) and the Steering Committee last Friday (15 January). Unfortunately, they did not share the report with us (Discovery Health and Discovery Health Medical Scheme) before it was published online.

This means that we have not yet had enough time to examine the contents of the report.

Now that the report is open to the public, we will study the findings and recommendations in detail. We will comment further on the report within the six weeks set out for medical schemes to do so.

Summary of the investigation panel’s findings

Unfortunately, the panel disregarded the expert analytical and legal evidence that Discovery Health submitted in response to each of the specific complaints against the 19 medical schemes under its administration, including Discovery Health Medical Scheme. This evidence shows clearly and factually that our processes to fight FWA are fair, independent and not discriminatory in nature.

We are, however, pleased that the panel supports our strong view that our forensic processes are robust and independent. Yet, we feel that the conclusion of racial bias based on the racial distribution in the outcomes must be examined further.

Background to the Section 59 investigation

In May 2019, groups of Black African, Indian and Coloured healthcare professionals made allegations of racial bias and discrimination against the entire South African medical scheme and medical scheme administration industry. These allegations referred to how the industry manages investigations into fraud, waste and billing abuse (FWA).

The panel started its investigation and arranged hearings. Discovery Health made submissions on behalf of medical schemes under its administration (including, but not limited to, Discovery Health Medical Scheme) and along with other industry role players, submitted extensive evidence, analysis and information at these hearings in response to the allegations.

Why do we take investigations into fraud, waste and abuse so seriously?

Corruption and FWA seriously harm efforts to make medical insurance affordable for medical scheme members. In the end, FWA also holds medical schemes back from extending lower-cost options to a broader representative group of South Africans. We cannot tolerate this abuse of members’ money, which not-for-profit medical schemes hold on behalf of members.

In fact, at the 2019 FWA Summit, the Council for Medical Schemes (CMS) stated that FWA claims may account for up to 15% of all claims that medical schemes in South Africa pay out. This means that as much as R22 billion to R28 billion of medical scheme members’ funds – hard-earned money paid towards their medical scheme membership – may be lost to fraudulent claims each year. Sadly, the total amount actually lost to FWA yearly could be much more than this.

Discovery Health’s own detailed calculations show that fraud, waste and billing abuse against its 19 medical scheme clients, make up at least 3% to 7.5% of the claim amounts every year. Looking at Discovery Health Medical Scheme alone, this means that the scheme members lose between R700 million and R1.7 billion of their combined money, to FWA every year.

The extent of these losses is apparent. Between 2012 and 2018, Discovery Health saved members of medical schemes under its administration, over R7.8 billion in recovered funds, as a result of fraud and forensics activities, with a halo impact, that is, relating to subsequent behaviour change by healthcare professionals, of R6.3 billion. In 2018 alone, Discovery Health recovered just over R500 million on behalf of Discovery Health Medical Scheme. All FWA recovered funds are paid back directly to medical schemes, restoring and protecting member contributions.

Acting in accordance with our legal (fiduciary) duty

Medical schemes have a duty to make sure that members’ money is treated with due care and to make sure that they only pay valid medical claims. If we fail to achieve this, it is not only a breach of the scheme’s commitment to you (our members), but it also leads to increases in your scheme contributions, and it can make schemes unaffordable.

Discovery Health is the leading administrator and managed care provider in the market. It is, therefore, our mandate and duty to examine the accuracy and legality of claims from the schemes within the law, exercising fairness throughout. We have done very well in this responsibility and led the industry by developing:

Our unwavering commitment to promote and support a diverse healthcare profession

We want to remind you of our all-inclusive approach to feeding sustainability of the healthcare sector. We do this by giving widespread support to healthcare practices through:

Discovery has also contributed significantly to the training of healthcare specialists, to building up healthcare in rural areas and to ongoing, leading clinical research. We assure you that our support to local healthcare professionals is unwavering.

We strongly support both transformation of the healthcare sector and driving continuous improvement to increase the rigour and fairness of every forensic process.

We strongly maintain that there is no racial discrimination in our fraud, waste and billing abuse processes whatsoever. We also respect the panel’s process and recommendations and will work hard within the healthcare system to make sure that outcomes are satisfactory, balanced and representative in future.

Aligned to our values of being a force for social good and embracing diversity, we are determined to contribute to strengthening the social drivers and other socio-economic factors in the healthcare system. In the panel’s own description, these contribute to the disproportionate outcomes reported on.

We stay committed to working constructively with the CMS to address the challenges healthcare providers face whilst encouraging and facilitating ethical conduct. We are also completely devoted to constructively taking part in the country’s broader dialogue and pathway to full transformation.

You can read the full original finding  here.—Health-e News