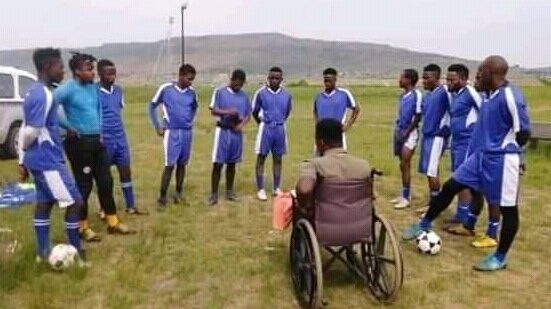 Ndumiso Phungula motivates the team he has led to success. (Health-e News)

After an injury robbed Ndumiso Phungula of a career as a soccer player, he is now determined to make it as a coach. Managing his team from the side lines in a wheelchair, the man known as Mqeqeshi to local fans is appealing for help to make him more mobile and achieve his dreams.

Ndumiso Phungula loves soccer. He described himself as a former “number one” player whose dreams faded after a serious injury that left him in a wheelchair.

“That is where my life changed,” he told Health-e News, recalling how he fell when trying to perform a bicycle kick. “I saw my future fading right in front of me and could not do anything about it.”

Phungula spent almost three years in and out of hospital, only to discover that he would never walk again. He is now paraplegic, which means he cannot move his legs and feet.

Still, the 26-year-old from uMsinga in KwaZulu-Natal would not give up on his love for the beautiful game, and found another way to be on the pitch.

“Since I am a person who loves soccer and have passion for it, I then discovered that even in my condition I can still perform in soccer, that is where I started to develop coaching skills,” he said.

Success on the pitch 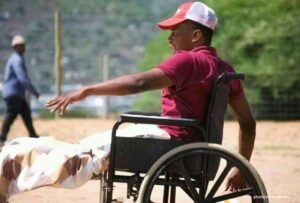 A few words of motivation from the coach.

Today, Phungula can be found wheeling up and down the side lines coaching other players.

From this success Phungula decided to start his own club, Carnabus FC, which he says is doing “wonders in the field.” Last year, Carnubus FC finished 3rd in the Ilenge Football Association Annual Tournament in uMsinga Ward 1.

“Some people in the crowd are always surprised when they see my team performing and they could not believe that it is couched by a man who is in a wheelchair,” says the man also known as Mqeqeshi.

This local success has inspired Phungula to take up coaching professionally. He is studying towards a D License at the South African Football Association Coaching Education Programme. He further plans to rise to the C level and ultimately become an A Licensed coach. Next, he says, will be the Level Three Professional License.

Despite this determination, Phungula’s wheelchair is still a hindrance. The old-fashioned manual chair he has makes it difficult to reach the grounds where his team plays.

That is why he is appealing for assistance to buy a motorised chair.

“This kind of a wheelchair will help me a lot because I will be able to drive myself around especially when I am in the soccer field coaching or at the game,” he said. 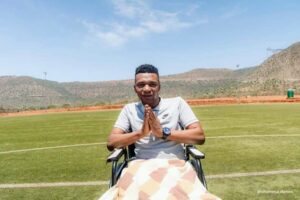 Ndumiso at the soccer field he loves so much

“And there will be no one who will be always behind me pushing me whenever I want to go,” he adds. “As you know, when you are a coach you always have to run around especially during the game to motivate the boys.”

Driven by his sheer willpower, with his coaching certificates and a motorised chair, Phungula is still determined to be a star on the pitch, even if he can’t play anymore.

“My future plans is to see myself becoming a well-known coach who has all coaching certificates and also to see the boys that I am coaching developing to the next level,” he said.

Anyone who is willing to help Ndumiso Phungula can reach him on 071 387 8436 or search him on Facebook as Ndumiso Ngcongo (Giggs).—Health-e News