Home » #Covid-19: The Johnson & Johnson vaccine is being distributed immediately 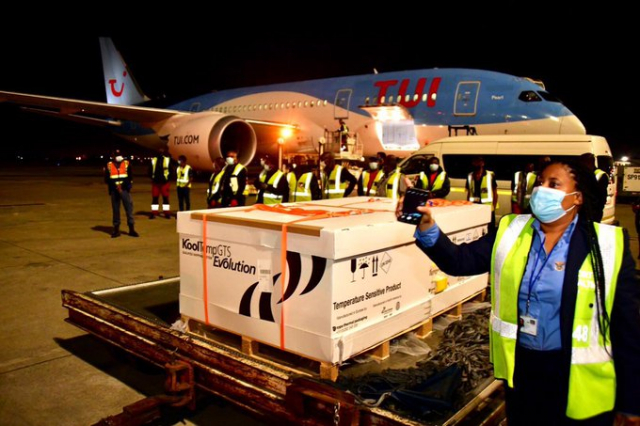 The first delivery of the Johnson & Johnson Covid-19 vaccine arrived in South Africa and will be distributed immediately. More doses of the single-dose vaccine are expected to arrive in the coming weeks.

The first delivery of the Johnson & Johnson Covid-19 vaccine arrived in South Africa on Tuesday and it is already being distributed.

That is according to a statement by the Government Communication and Information System (GCIS).

The vaccine arrived at the O.R. Tambo International Airport in Gauteng on an overnight flight and was immediately moved to a secure facility. It is then being distributed to all vaccine centres in South Africa.

The first batch of the J&J #COVID19 vaccine arrived at @ortambo_int last night. Frontline healthcare workers will be vaccinated during first phase of the #VaccineRolloutSA #VaccineforSouthAfrica pic.twitter.com/Eqfh3CcWy1

“Government remains committed to saving lives and protecting livelihoods. All citizens are reminded that adhering to health protocols together with the vaccine remains our best defence against the virus,” government said in a statement.

Effective against the variant

About 500,000 vials of vaccines will follow in the next four weeks. South Africa is the first country to accept the Johnson & Johnson vaccine for use.

Storage much easier to manage

While the single-dose J&J vaccine is more complex to manufacture, its advantage is that it can be stored in a standard refrigerator for up to three months. That solves the logistical problems other vaccines have thrown up including. Some, like the Pfizer-BioNtech vaccine need to be stored at super cold -70ºC temperatures.

The company is producing their vaccine in stages, starting with growing living tissue cultures with partner Emergent. This will produce cells that are replicated after being infected with an engineered common cold virus that carries the SARS-CoV-2’s protein.

The vaccine is then frozen and shipped off to a second facility where it is divided into vials for distribution. The entire process takes around two months. In comparison, Pfizer’s vaccine can take up to 4 months to manufacture.

South Africa has recorded nearly one and half million Covid-19 infections since the start of the pandemic. Latest figures show 1,210 new cases recorded with 24 486 new tests conducted. Since March last year, the cumulative total of tests conducted to date is 8,737,330.

“We convey our condolences to the loved ones of the departed and thank the health care workers who treated the deceased patients,” said the minister.

The country’s recovery figure now stands at 1,396,951, representing a recovery rate of 93.5%. –Health-e News with SAnews.gov.za