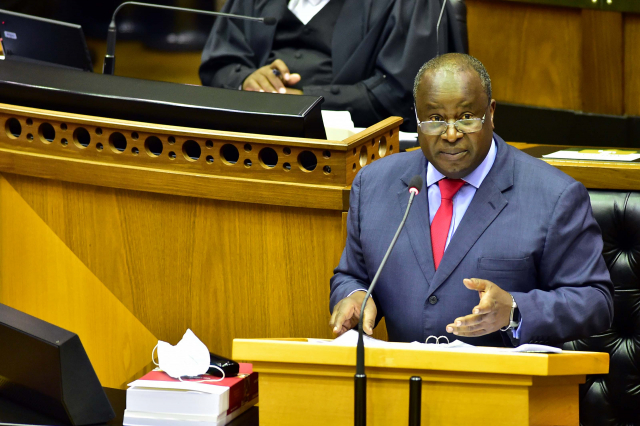 Finance Minister Tito Mboweni has announced that government is allocating more than R10 billion for the purchase and delivery of vaccines over the next two years.

Delivering the Budget 2021 speech, the finance minister acknowledged that South Africans have battled the effects of Covid-19 for almost a year.

“Since then, we have mourned the passing of nearly 50,000 of our fellow South Africans as a result of the Covid-19 pandemic. The damage caused by Covid-19 runs deep and we share in the collective pain of many South Africans who have lost their jobs,” said Mboweni.

“The provincial equitable share will be augmented by R8 billion for provincial health departments in 2021/22 to deal with Covid-19,” Mboweni told parliament.

“Of the R10.3 billion for vaccines, R2.4 billion is allocated to provincial departments of health to administer the Covid-19 vaccine programme. Government will also put in place a no-fault compensation fund to cover claims in the unlikely event of any severe vaccine injuries, allocations to which will be announced in due course,” he announced.

Treasury also raised the contingency reserve from R5 billion to R12 billion to make provision for the further purchase of vaccines and cater for other emergencies.

“The brave and fearless sacrifices of our frontline workers continue to save thousands,” said the minister.

“We salute all our health care and essential service workers who remain standing at the front line of our fight against Covid-19. We also salute the many South Africans who rallied to help others survive.”

Mboweni said the tax collection shortfall has meant a need to increase the amount of tax charged on alcohol and tobacco by 8% and that “it is clear that excessive alcohol consumption can lead to negative social and health outcomes.”

This means a 340ml can of beer or cider rises by 14c, a bottle of wine by 26c and sparkling wine, 86c. Spirits including whisky, gin or vodka increase by a whopping R5.50 while a packet of cigarettes will set you back an extra R1.39 when the tax is introduced.

Social services accounts for the majority of the budget which is set at R2 trillion for 2021/2.

The finance minister also announced that there is R83.2 billion available for the public employment programmes since the 2020 Special Adjustments Budget.

“We are now augmenting this by R11 billion for the Presidential Youth Employment Initiative, taking the total funding for employment creation to nearly R100 billion,” said Mboweni.

“Getting our fiscal house in order is the biggest contribution we can make to support our Economic Reconstruction and Recovery Plan,” he warned.

“Continuing on the path of fiscal consolidation during the economic fallout was a difficult decision. However, on this, we are resolute. We remain adamant that fiscal prudence is the best way forward. We cannot allow our economy to have feet of clay.”

Old age, disability and care dependency grants will rise by R30 to  R1890. War veterans grants increase by R30 to R1910 and child support and foster care grants rise R10 each to R460 and R1050 respectively.

“Government remains committed to ensuring that deserving students are supported through higher education,” said the minister.

“The National Treasury is working with the Department of Higher Education and Training to work on policy and funding options that will be detailed in the MTBPS.”

While luxuries will increase in price, Mboweni announced relief for the lower and middle-income bracket.

“The personal income tax brackets will be increased by 5 per cent, which is more than inflation,” he said.

“This will provide R2.2 billion in tax relief. Most of that relief will reduce the tax burden on the lower and middle-income households. This means that if you are earning above the new tax-free threshold of R87 300, you will have at least an extra R756 in your pocket after 1 March 2021.” – Health-e News.