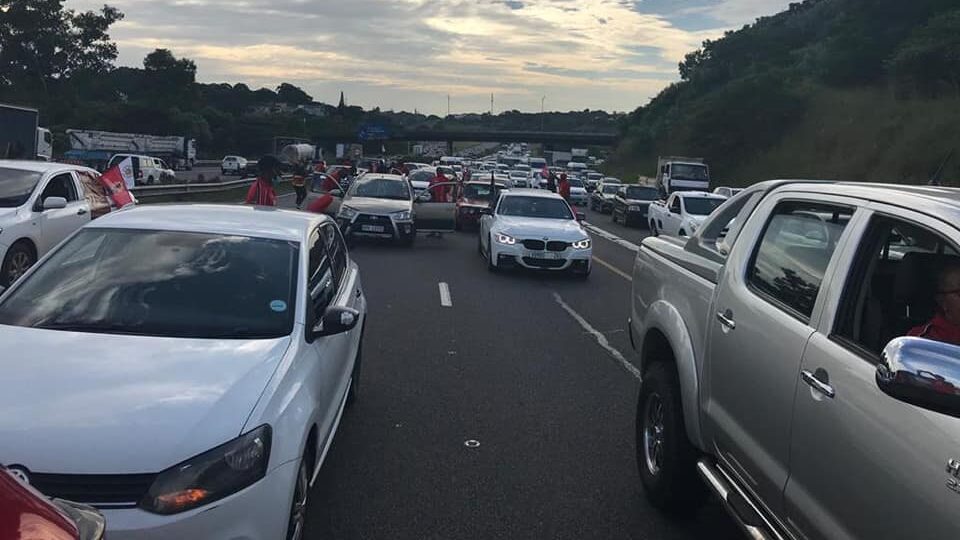 SAFTU members shut down N3 between Durban and Pietermaritzburg. (SAFTU/Facebook)

South African healthcare workers to participate in a stay-away strike called by SAFTU to voice their grievances despite Covid-19 concerns.

Thousands of South African healthcare workers are staging a stay-away, striking over poor wages and little compensation for working during the Covid-19 pandemic.

Workers heeded the call by the South African Federation of Trade Unions (SAFTU). The union is demanding a radical change in policy, which includes the nationalisation of all strategic monopoly industries. They’re also demanding a minimum wage of R1,2000 per month.

The union has also called on the government to nationalise healthcare and immediately implement National Health Insurance.

The strike action comes on the same day Finance Minister Tito Mboweni will announce the national budget. The stay away also takes place as thousands of frontline health workers receive the Jonson and Johnson Covid-19 vaccine.

No empathy or compensation

The Young Nurses Indaba Trade Union (YNITU), which represents thousands of South African healthcare workers, said their members participating in the stay-away cannot be subjected to any workplace disciplinaries.

“The strike is protected, which means our members will not be subjected to disciplinary hearings for not going to work,” said Lerato Gova, YNITU president. “But we [may] not be paid for the day as the employer might apply a no-work-no-pay rule.”

According to Gova, health care workers are fed-up with their working conditions and what they see as a lack of sympathy from the government. Health workers are have shown dedication, especially during the Covid-19 pandemic, said the union.

“To make matters worse, even during a pandemic that has claimed a lot of people, where frontline workers risked everything to be the last line of defence during these trying times, government still does not care,” she said.

Health workers have seen no compensation in the form of allowance, she added.

“They have made it clear that they will not be giving us any salary increase for last year, hence their refusal to implement the last leg of Resolution One of 2018,” said Gova.“They will freeze wage increase until 2024.”

“That decision does not need a rocket scientist to tell all of us that it is a nonsensical decision. It shows that they undermine, undervalue and do not appreciate our existence. They want to subject us to permanent poverty,” she said.

Gova believes that the stay-away strike will send a clear message of their grievances to the government.

“People are still going to die prematurely in front of our eyes and there is nothing we will do except to continue being disgruntled and angry, and even displace our anger to the wrong people, our colleagues and patients,” she said.

“The stay away will send a strong message that we are angry, and we are tired of tolerating mediocre and substandard performance by government,” she added. “People in positions of authority are the ones who need to feel the brunt of our anger.” —Health-e News