Home » #COVID-19 third wave: The cracks are showing as some Gauteng facilities are starting to buckle under pressure 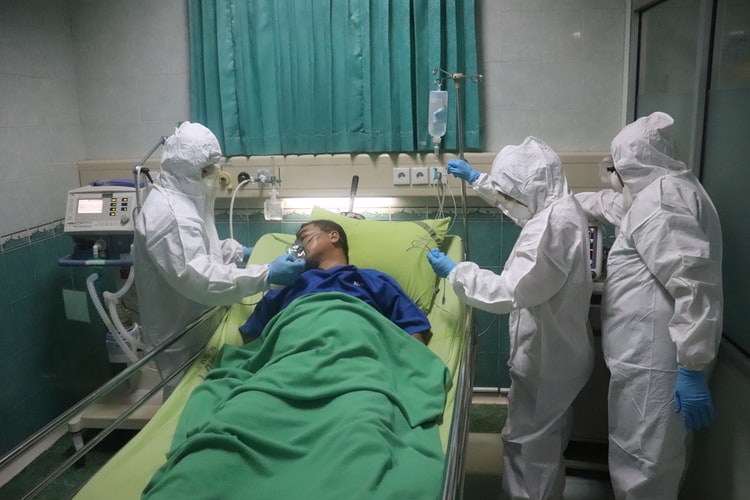 Short-staffed Gauteng healthcare facilities are scrambling to secure more resources as the number of daily infections continues to climb in the province.

As the third COVID-19 wave starts to gather momentum, some Gauteng healthcare facilities are beginning to buckle under pressure as an ever-increasing influx of patients is stretching resources and pushing staff to their physical limits.

Lenasia South District Hospital has recorded more than 20 positive COVID-19 tests per day and more than 100 a week since the beginning of June. *Dr Dimakatso Shabangu said that the hospital has been forced to request additional healthcare workers from other facilities to cope with the surging cases.

“Many patients deteriorate quickly by the time they get to the hospital and have to stay longer due to the instability of their condition. Elderly patients exhibit more symptoms than younger people, who typically only show mild symptoms, and can usually go recover at home,” said Shabangu.

Patients who need to be admitted often have to wait for beds to become available, and the hospital is finding it harder to manage patients efficiently, according to Shabangu. This also means that some patients are discharged earlier, before a full recovery, due to space constraints.

The situation is also taking a toll on healthcare workers, with many experiencing emotional trauma from seeing so many patients dying on a daily basis.

“They are physically exhausted. Many of them become ill and are unable to come to work. We managed during the previous waves (of COVID-19), but the workload has increased drastically with this one.”

Shabangu added that patients who need to come to the hospital to collect their chronic medication are still able to do so, but warned that there are now longer waiting periods for everyone. In a bid to bulk up its human resources to survive the third wave, the hospital interviewed several doctors who are expected to take up their positions in July.

Acting Minister of Health, Mmamoloko Kubayi, noted that that the COVID-19 Delta variant is of serious concern because it is accelerating the surge in Gauteng, which has become the epicentre of the third wave.

“Despite having only two key mutations at the receptor binding domain (whereas the Beta variant has three), it has proven more transmissible than any of the other variants, displacing the Beta variant and driving the pandemic in Gauteng,” she said.

One of the main challenges faced by healthcare workers during the first wave of the pandemic was a shortage of personal protective equipment (PPE), such as masks, gloves, and sanitisers.

“Our morale is low. Companies are working from home, schools are closing, and people are being told to stay home. But just like during the previous waves, very little is said about healthcare workers,” said *Tshepiso Semenya, 42, who has worked as a nurse at the Orlando Clinic for 12 years.

“We still have to beg the government for more PPE and more support staff to help with the admin and the increasing number of patients. What’s worse is that the clinic has not been fumigated since before the end of the first wave last year.”

The burden of the current workload, exhaustion and illness have contributed to an increase in absenteeism of healthcare workers at the clinic.

“The vaccination doesn’t work alone, especially with the Delta variant, because of how easily transmissible it is. That is why some nurses at the clinic have tested positive even after being vaccinated.

“Many of them have to be away from work for 10 days or more, while the number of patients increases. Although we are still protected by vaccinating, we still need people to wear their masks and practice social distancing, as much as we needed them to do so before the vaccine.”

*Constance Malatji, 51, who is a nurse at a clinic in Soweto, recently tested positive for the second time this year and is currently in isolation, after being in contact with a 13-year-old.

She was infected for the first time in January, during the second wave of COVID-19, and then had to wait for three months after she recovered before getting vaccinated.

“I kept postponing it because of my fear of the vaccine as the doses that had arrived during that time were either suspended or discontinued due to the complications that they caused,” said Malatji.

Malatji added that members of surrounding communities often lack information about the new Delta variant and how much more dangerous it is, resulting in a relaxation of precautions.

“Many of our patients come from homes that are poverty-stricken, and have gotten poorer throughout the second and third waves, as many have lost their jobs. These circumstances also contribute to their lack of access to information about the new variant. Some who were positive in the first wave think they are immune to the Delta variant, not realising that reinfections are highly likely and how many more people are getting infected.”

Meanwhile, the National Union of Public Service and Allied Workers (NUPSAW) said that its members are unable to access healthcare facilities because the public hospitals and clinics in their communities and surrounding areas are full, not admitting patients, or have run out of medication.

“Those who do end up waiting in long and overcrowded queues, which puts them at risk of getting infected or infecting others with the virus,” said NUPSAW Communication and Media Liaison Officer Kagiso Nyako.

Nyako said that many are also diagnosed with mental health conditions, such as depression and severe anxiety, due to the uncertainty of their futures under the pandemic.

NUPSAW is affiliated to the South African Federation of Trade Unions, which represents public servants, including nurses and community healthcare workers (CHWs). Nyako noted that the shortage of staff in hospitals could have been better managed with the assistance of CHWs.

“We believe that the role of CHWs has been overlooked throughout the pandemic. There is slow or little progress with the vaccination rollout, and many hospitals are understaffed and unable to keep up with the workload, resulting in slow service delivery.

“CHWs can assist with administrative roles, such as coordinating space and queues, instead of not working at all during the pandemic. The administrative backlog will worsen when registration is opened for public service workers in other sectors.”

Nyako said that the slow vaccination rollout will negatively affect a large number of public service workers and leave many exposed to contracting the virus.

Kabuyi acknowledged the public criticism of government’s slow response against the Delta variant and said that healthcare workers are burned out. She explained that a strategy was formulated in August 2020 to manage safety and fatigue amongst healthcare professionals.

“This includes the promotion of mental health among healthcare workers through psychological support, including practical guidance for managers and health workers, respectively, to prevent mental illness through psycho-education, information sharing and support mechanisms like daily check-in strategies; psychological first aid to recognise a colleague in distress; as well as appropriate referral.”

Further mechanisms to help workers reduce stress and anxiety associated with the COVID-19 pandemic include engaging and communicating regularly and accurately with workers, and providing as much information as is needed to answer questions.

“We will also deploy some 3000 final year nursing students. If each student can manage 40 vaccinations a day (which is what is expected per vaccinator) that takes us to (additional) 120 000 vaccines a day. We are at an advanced stages of concluding this arrangement with nursing colleges,” said Kabuyi. – Health-e News

*Names have been changed