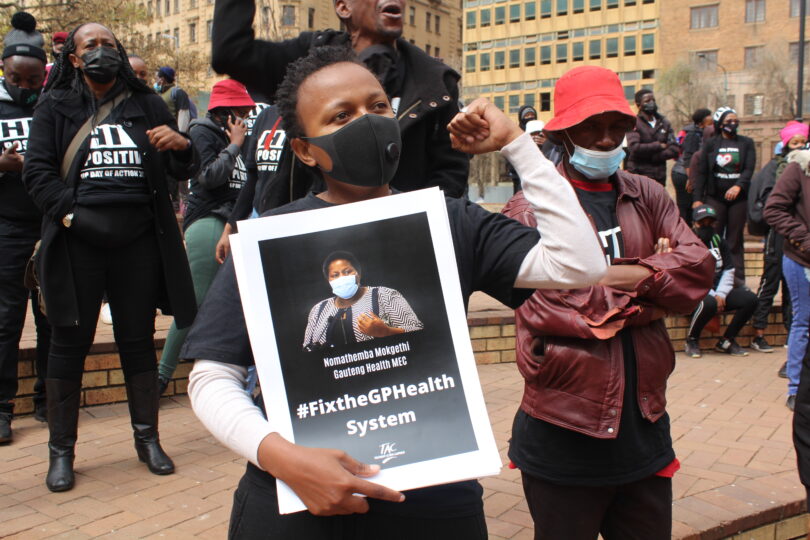 TAC members will not budge until they have met with Gauteng Premier David Makhura and Health MEC Dr Nomathembu Mokgethi. (Photo: supplied)

#FixTheGPHealthSystem: TAC turns up the heat

After not getting any joy when the TAC members marched to the premier’s offices in Newtown, Johannesburg last Friday, they once again turned up on Tuesday following the rescheduling of their appointment.

This time they were even more determined to get a response and vowed to sleep outside the premier’s office if he failed to show up. A few other organisations joined the TAC including the South African Network of Religious Leaders Living with or Personally Affected by HIV & AIDS (SANARELA), Positive Women’s Network (PWN) and the National Association of People Living with HIV and AIDS (NAPWA).

Bishop Mbulelo Dyasi said there is evidence that the South African health system is collapsing.

“We’re 100% in support of this gathering,” said Dyasi. “We are not here because we are bored or we like attention”.

The TAC staged a symbolic funeral outside the library gardens ahead of their meeting. This was in memory of all those who have died as a result of the Gauteng health system.

“This coffin represents our family members, our friends, our mothers, our fathers that we have buried. We have buried loved ones who have passed on before their time. We are burying our loved ones with these coffins because the healthcare system is failing us,” said TAC National Chairperson Sibongile Tshabalala.

Gauteng Chairperson for the Treatment Action Campaign Sibongile Tshabalala says patients are dying at the province’s healthcare facilities due to a lack of proper care #FixtheGPHealthSystem @KayaNews pic.twitter.com/CIvUmwuDOS

Tshabalala mentioned that women are abused daily in their households by their partners, by society when men rape them in communities and by the healthcare system when patients are not receiving the help they desperately need.

“We are dying as women, in the name of having a womb. When we arrive in hospitals, we are left to give birth on the floor. You are kept waiting on a bench for two days if you take too long to give birth. And even then, them helping you isn’t a certainty,” said Tshabalala.

She added: “To date, there are women who have had their wombs removed without their consent. We have women being dehumanised.”

According to a member of NAPWA, government clinics don’t have a proper database for people living with HIV and that is why patients fear visiting clinics.

“Our clinics don’t have any healthy documentation of people living with HIV/AIDs due to the stigma attached to the status. So now people don’t have rights to go to any clinics that are free because of the demarcation. That leads to the most defaulters here in Gauteng,” said Thozama Qomana.

Another challenge faced in the health sectors is young girls not being able to access health facilities and women having surgical procedures performed on them without their knowledge.

“We go to clinics and find challenges. Young girls cannot access health services in clinics they have a right to. Women living with HIV have their wombs removed without consent. These are all the things that are happening in our health system,” added Lindiwe Mahlangu from PWN.

Nothing has changed since 2012

An analysis created in 2012 to monitor healthcare services in selected facilities in Gauteng by TAC and SECTION27 found that issues from over a decade ago still exist today. These include the mismanagement of finances, the lack of emergency medical services, the shortage of medicine and the corruption and lack of accountability by officials.

“What we are seeing at Charlotte Maxeke Johannesburg Academic Hospital is something that will be found in various other hospitals like the Rahima Moosa Hospital, Helen Joseph Hospital, BBH (Tambo Memorial Hospital) and at the Pholosong Hospital because they are not being maintained,” said Tshabalala. 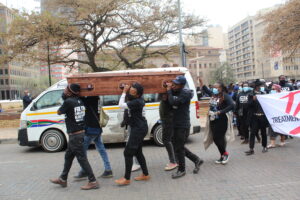 She said it also takes between three and four hours for an ambulance to arrive and that patients don’t get food, sleep on dirty sheets and spend hours waiting on uncomfortable benches.

Makhura in yet another no-show

After numerous consultations with government officials, the TAC group could still not meet with the premier nor the MEC. It was alleged that Makhura had gout and the MEC a cough. News of this only made the TAC group even more determined not to back down and have prepared to camp outside the premier’s office. – Health-e News