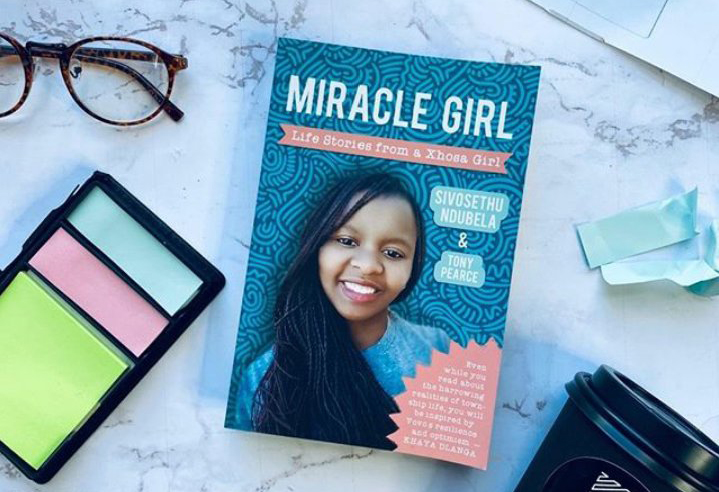 Sivosethu Ndubela, has penned her remarkable journey of survivial in her book 'Miracle Girl'. (Photo: Twitter)

A young motivational speaker, who was given a month to live and was later declared dead on the operating table due to a heart condition, has written a book Miracle Girl about her journey of survival and overcoming the odds.

Four years ago, Sivosethu Ndubela (21) survived two open-heart surgeries and has told her incredible story in an award-winning book.

Ndubela, originally from New Brighton, in Gqeberha, in the Eastern Cape, now lives about two kilometres away in KwaZakhele. He book was a finalist in the American Book Awards Festival in 2019.

Now a motivational speaker, she visits schools in Nelson Mandela Bay to speak about her life experiences and the lessons she learnt. She also teaches youth in her community traditional and modern dance.

Ndubela’s story started a few years ago, when she started experiencing heart problems as a teenager, but doctors struggled to diagnose her exact condition.

“I would feel very weak and at times unable to walk and I would also frequently gasp for breath. In addition, I lost a lot of weight in a very short space of time, something that was really difficult to explain,” she told Health-e News in a telephonic interview.

Subsequently, she had to undergo two open-heart surgeries to remove part of her heart, as well as an aneurysm. A valve was also replaced during the first procedure but Ndubela was not expected to survive, as her heart was severely damaged.

A month to live

“Before the second operation, the doctors told me that I only had a month to live. I had an infection that was not responding to antibiotics,” she said.

Ndubela recalled that during her second surgery, while lying on the operating table, she could hear doctors calling for mortuary attendants to wheel her body away.

This is a 21 year old girl Sivosethu Ndubela from Port Elizabeth. She is the Author of the book"Miracle Girl"She was orphaned at 13 years years. Few years later Sivosethu was diagnosed with a rare life threatening heart condition and underwent two open heart surgeries. pic.twitter.com/nHirBRuO5y

“The doctors saw that my heartbeat stopped and thought I was dead. Although I could hear some of what was happening around me, I could not speak and I could not see,” she said.

“I heard the doctors saying: ‘she’s dead’, and summoning mortuary attendants to come take my body away. I could then hear them starting to disconnect the life support machines that were keeping me alive and that is when I told myself I have to make some movement.

“In my mind, I was shouting that am not dead, but the doctors could not hear me. I moved slightly and one doctor noticed and shouted that I was not dead. It was then that they started working on me again,” she said.

On the road to recovery

Ndubela was eventually resuscitated and against all odds started to make a recovery. A recent hospital check-up returned positive results and she was told that her heart and other organs were functioning well.

These days, she also visits hospitals in Gqeberha to talk to patients and calm them before they undergo high-risk surgery.

“There have been many twists and turns in my life. My mother died when I was only 13 and my father was shot when I was still little. That was the most painful day of my life,” she said.

However, Ndubela has overcome the odds and has the following advice for the youth: “It might not look good at first, but that’s OK. Read as much and as often as you can, and don’t be afraid, because fear is what stops most people from succeeding.” – Health-e News