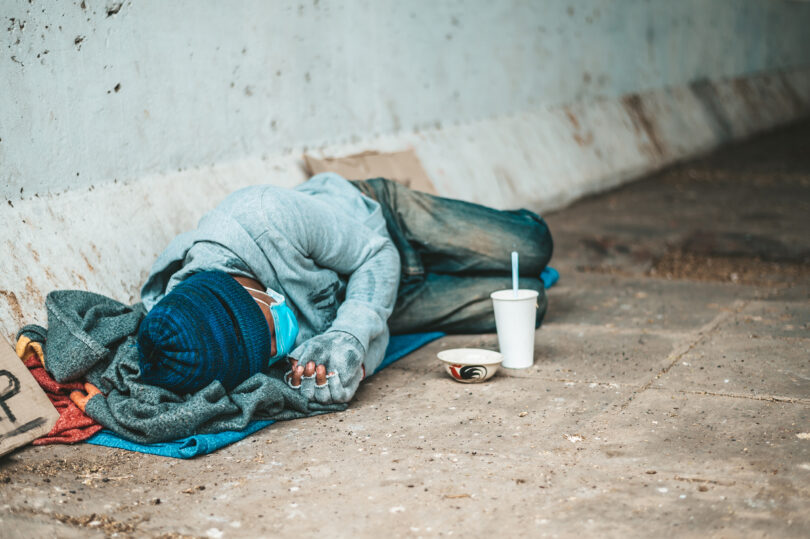 A homeless cancer patient living on Louis Botha Avenue in Orange Grove, north east of Johannesburg, is living in a world of pain and discomfort as he battles rectal cancer.

Gift Moreki* is appealing to authorities to find him a place to stay so that his condition can be managed as the COVID-19 pandemic threatens to overwhelm the public healthcare system.

Having undergone surgery, Moreki, who has been living on the street for five years, had a colostomy bag inserted which allows him to pass waste. He struggles to recall exactly when the surgery was performed and how long he has been living with the bag due to incessant and intense pain.

“I am sick. They have inserted this thing (pointing to his colostomy bag). It spilled onto my blankets last night and I had to throw them away,” said Moreki who was clearly in distress as he explained how the miserable conditions make it even more difficult.

Health-e News spoke to a medical doctor to shed some light on Moreki’s condition. He said Moreki urgently needs constant care in a home environment. 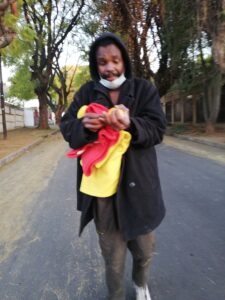 Gift Moreki trying to find blankets as he dreads the chilly night on the streets of Orange Grove. (Photo: Portia Kobue)

“His immune system is already compromised as a result of the cancer. The main concern is that he possibly faces picking up an infection at his colostomy site. This might spread quickly to the entire body resulting in death if not attended to,” said the doctor.

Moreki’s surgery required doctors to open his stomach and attach the colostomy bag-which hangs outside his belly so that he can remove the bag once he has relieved himself.

According to the doctor, the stoma, which is the opening on the belly where the bag is attached, requires appropriate care. He also says the bag needs to be emptied a few times a day and changed every two to three days.

“Whenever the bag is changed, the stoma would need to be cleaned to avoid picking up infections. For a man living in the streets it is clearly difficult to imagine how this level of care would be possible,” he stressed.

Moreki’s friend, Musa*, shares the doctor’s concerns and is worried his friend won’t survive many more cold winter nights. This is made even more difficult as a constant supply of clean blankets is needed once his colostomy bag overflows.

“I appeal to the government to help him at least find him a place to stay so that he can be nursed in a comfortable place,” said Musa.

The City of Johannesburg (COJ) has a comprehensive strategy to help the homeless. As part of the strategy, the COJ’s Department of Social Development’s intervention strategy includes community reintegration, shelter management, awareness and prevention.

COJ spokesperson, Nthatisi Modingoane, says social workers will try to locate the displaced person and give a possible referral for medical care if he is willing to be assisted.

“My social work assessment on this referral is that the person requires medical attention more than the shelter. It is important to note that city-owned shelters do not have medical staff onsite. However, if the social workers find the person referred to in this matter, they will assist by firstly seeking medical intervention for him in the form of hospitalisation or hospice as it will be a futile exercise to place a terminally ill person who requires medical attention in a facility where there are no 24 hour medical practitioners,” explained Modingoane.

Finding solutions for the homeless 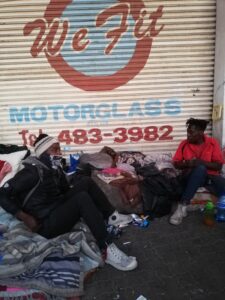 The Community Policing Forum for Sector4 Norwood Precinct, has over the years been working with the Gauteng Department of Social Development (DSD) and shelters to address the plight of the homeless.

“We want to ensure that each individual receives relevant and appropriate support for their challenges.  Mental health, drug abuse, poverty and family trauma are the most concerning challenges in the precinct,” said Ngqinambi. “The CPF has been lobbying the Gauteng DSD to provide a place and services to accommodate the homeless and address their needs since the office moved to Alexander Township four years ago”.

Ngcinambi is also calling for the City of Johannesburg to urgently reopen the Orchards Clinic which has been undergoing expansion since 2018.

To improve access to health care construction and completion of clinics Hospital in Florida, Naledi, Bophelong, Turffontein, Zandspruit, the Orchards Clinic and the Alexandra Hospice are in the works #JoburgBudget2021 #WeServeJoburg ^NS pic.twitter.com/8zVInfJGlu

“Our clinic has just been completed but has not been handed over. If it was in operation, it would alleviate the suffering of the homeless and the poor,” she added.

According to a study published by the Human Sciences Research Council (HSRC) in 2010, it was found in some cases that their own or family members’ ill-health had contributed to individuals becoming homeless.

The study also revealed that access to healthcare was generally good in urban centres and most respondents were satisfied, although some reported discriminatory treatment.

It further read: “The risk profile of the homeless shows that systematic health promotion is required and that some health service providers need to be made more aware of the health needs of the homeless.”

In a more recent study, ‘Experiences of the homeless accessing an inner-city pharmacy and medical student-run clinic in Johannesburg’, as published by the Department of Pharmacy and Pharmacology at the University of Witwatersrand in 2020, identified three main themes.

The first theme, homelessness affecting health, explains how limited access to food, ablution facilities and shelter negatively impact a homeless person’s well-being. This led to the second theme where diseases such as tuberculosis, influenza, sexually transmitted diseases and dental infections were identified as ailments occurring frequently.

It remains clear that the need for healthcare services is strong yet participants were reluctant when accessing these services as they faced stigma and discrimination. In addressing health needs, the homeless need to be treated with compassion and empathy. – Health-e News

* Not their real name