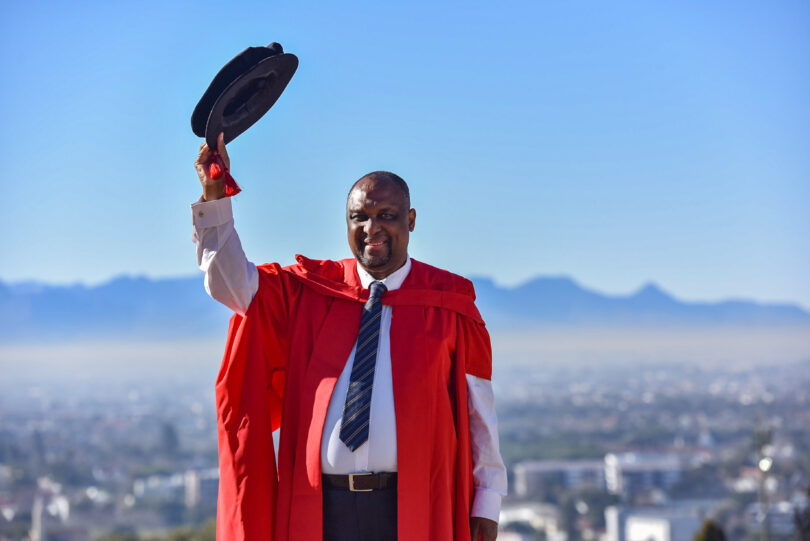 Last month the National Department of Health’s Director of Drug-resistant Tuberculosis (DR-TB), Dr Norbert Ndjeka, received an honorary doctorate from the University of Cape Town for his work in the field of DR-TB treatment.

Dr Norbert Ndjeka, Director of Drug-resistant Tuberculosis (DR-TB) at the National Department of Health, recently received an honorary doctorate from the University of Cape Town’s health sciences faculty in recognition of his work.

Ndjeka has been in his current position since 2009 and some of his accomplishments saw drastic changes in the lives of people suffering from DR-TB.

#UCTGrad2021 “We honour Dr Norbert Ndjeka today for his vision and activism in driving forward the national TB programme, for his commitment to service and community, and his dedication to healing and reducing suffering.”- Professor Lewis

While thousands of people in South Africa still get infected with DR-TB, they no longer have to take years out to complete toxic treatments that cause hearing loss in up to a third of patients.

Patients also no longer have to remain isolated in hospitals, away from their families and homes, just because they have TB. DR-TB is also no longer akin to a death sentence – all thanks to revolutionary changes to the DR-TB programme under Ndjeka.

“To be honoured with an Honorary Degree feels good. It is always good to be honoured by peers. It provides satisfaction and fulfilment. It’s also an encouragement for me to go an extra mile,” said Ndjeka.

Ndjeka’s interest in medicine started when he was in high school, where he excelled in maths and science. He also comes from a family of doctors as two of his closest cousins studied medicine. He believes that family played a big part in him becoming a doctor.

Ndjeka also serves as the World Health Organisation’s (WHO) temporary multidrug-resistant TB (MDR TB) advisor. He is also a member of the TB team of experts, serving as an experienced expert on MDR TB, as well as extreme drug-resistant TB (XDR TB) under the Stop TB Department of the WHO.

Enabling the decentralisation of TB treatment and bringing new agents to improve treatment outcomes have been his biggest career achievements.

However, Ndjeka recalled that when he started working in the health department’s TB division, things weren’t looking good as many people and doctors did not understand TB medication.

“When I joined in 2009, it was really tough as the treatment outcomes were very poor. At that stage, we only had about 17 treatment initiation sites around the whole of South Africa for treating MDR. Also, there were no treatment guidelines, meaning that any doctor in any province was doing their own thing, and patient outcomes were very bad,” he said.

When Ndjeka started working for the Department of Health, he conducted a study to try to understand the situation in the country and found that the death rate was at about 58%. He believed that by creating more sites and creating new drugs, treatment success would improve.

“When I look back at that period, I recall having worked through the policies I have put in place and their implementation with my team and other partners around the country. We have now moved from having 17 initiation treatment sites to 658,” stated Ndjeka.

TB is the second biggest cause of death from infectious diseases after HIV, and continues to be the single largest contributor to death in South Africa, with about 58 000 deaths per year estimated. It has also been estimated that of the 58 00 people who die from TB, more than half are HIV positive.

“One of the challenges that we have in the country is that three out of four of our MDR TB patients have HIV. So when we see all these death rates among MDR patients, we need to note that HIV also plays a role in terms of causing death. So we are working hard in terms of improving HIV care among our patients,” he explained.

The prevalence of DR-TB is increasing in many countries, which threatens improvements made to halt transmission. Around 1.8% of new cases of TB in South Africa are MDR. Treatment for drug-resistant TB is associated with high mortality and poor outcomes.

“Prior to the inclusion of the bedaquiline, the mortality rate among patient with XDR TB was between 47% and 58%. This means that when you treat a group of patients for a year, but you provide two-year treatment for each patient and follow them until they complete their treatment, you’ll find that 58% would have died in the process. When you lose half the group of patients, it is a big problem. That has been the mortality rate for XDR TB.

“The death rate for MDR TB has been around 20%-25%, because the disease itself is not as serve as XDR TB. But when we include bedaquiline and other new drugs, we noticed that the death rate amongst XDR TB patients came down from 58% to 20%. This is a huge reduction. The MDR death rate also moved from 20% and is now in the region of 15%. It’s a work in progress,” said Ndjeka.

Bacille Calmette-Guérin (BCG) has been used as a vaccine for TB for 100 years and is currently the only licensed vaccine for TB. The vaccine is rarely given to anyone over the age of 16, as it does not work very well in adults, but is rather given to adults aged 16 to 35 who are at risk of TB through their work. A new vaccine would be a game changer for the health system.

“The problem with the BCG, which is now 100 years old, is that when it was introduced, the thinking was it would prevent TB. We know now that it actually doesn’t help much, because it only prevents serve forms of TB, like TB meningitis and those are rare,” he explained.

The recent Nix TB study found that DR-TB, which requires many drugs and usually takes between 18 months and two years to treat, can now be cured in just six months when using a three-drug regimen. These drugs include bedaquiline, pretomanid and linezolid and are collectively referred to as the BPaL regimen.

“I met this young lady who had MDR TB a long time ago and was treated for it through injectables. She was unfortunate to get the disease again and recently came back to Sizwe hospital in Johannesburg. She told me that the new treatment is far better than when she got MDR TB first time around,” said Ndjeka.

“If I had the chance to start my life again, I’d still be a medical doctor. The passion to improve life for humankind is something that I like. Being a doctor puts me in a better position to assist and improve humankind.” – Health-e News