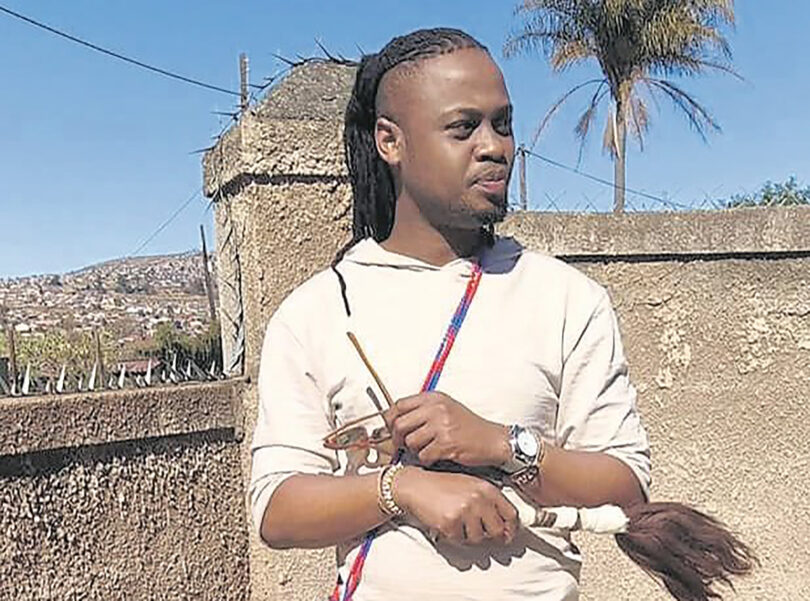 Thandukuthula Khambule, affectionately known as PIMPDLOZI, is happiest when he's helped one of his clients, and 'feels the ancestors in his veins'. (Photo: supplied)

This African Traditional Medicine Week we profile Thandukuthula Khambule who is affectionately known as “PIMPDLOZI”. He is not only a traditional healer, but also an entrepreneur and self-confessed fashionista and says the two lifestyles can happily coexist.

Growing up in a Christian home made it hard for Khambule (28) to accept his calling, but he eventually reached a point where he no longer cared what people said and followed his dreams.

Khambule describes himself as a modern, vibrant and ﬂamboyant sangoma (traditional healer), born in the Pietermaritzburg township of Imbali, in KwaZulu-Natal.

After completing matric, he pursued a career in civil engineering, before deciding to follow his true calling, which first emerged when he was very young.

“In my early childhood, I had a prophetic gift and I was a youth minister at the family church that I attended. In early adulthood, I started experiencing vivid dreams and that was the commencement of my calling to be a traditional healer. Post my initiation to become a traditional healer, I chose to live the life of my dreams, without conforming to societal expectations as to how a traditional healer is deemed to be.”

Not only is Khambule a healer, but also an entrepreneur who has ventured into various businesses, including events management, fashion, and catering.

“I have a very interesting and vibrant lifestyle that is very different from an average or ‘normal’ traditional healer. I am a true fashionista and like to smell divine from my elite taste in fragrances. I have made headlines on different media platforms through hosting upmarket events, creating awareness and educating people about ancestral calling; thus removing the stereotype that traditional healers are perceived to be evil. I am a true inspiration and a game changer.”

The journey Khambule took has not been easy, especially as he was judged for his choices by his community due to previously being a born-again Christian.

“I have been called a witch a number of times and challenged by my colleagues, who believe I am fake. However, that doesn’t stop me from being the kind-hearted person that I am to everyone who has an encounter with me,” he said.

His everyday life as a healer is emotionally draining, because of existing in between two worlds, but Khambule still manages to juggle his “normal” life too.

“I am able to control the spiritual world, as well as my natural life. I can determine when it is time to work, but I also have time to myself. I am disciplined and able to control myself,” he explains.

Khambule’s clients are people who need spiritual guidance, healing and direction in their lives, businesses and relationships. “I deal with different kinds of people, from businesspeople and executives to ordinary people, especially from outside my town are my biggest clients. My clientele ranges from ‘white’ clients to ‘premium’ clients – I have five levels of clients, with premium being the highest. I work with all races, ages and genders.”

Khambule said that dealing with clients remains the same on many levels when compared to the past. “What differs in modern times are the communication options we have and I am also working on modernised techniques that will change the way we do consultations.”

“I was also in denial and rejected anything to do with ancestors until I had to ﬁnd myself and found that I have more in me than what I thought myself capable of. I had to let go and give in fully. Times have changed and ancestors also change with the times. You need to teach them. I am humble as I am still learning daily.”

He added that life as a healer can be chaotic, but satisfaction comes from knowing that you have helped someone. – Health-e News