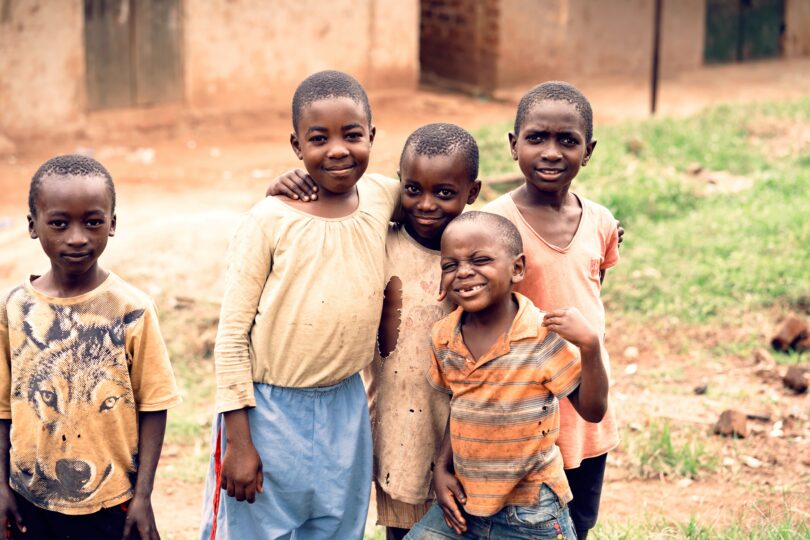 Parents cannot afford to feed their children and are unable to take send them to school with a meal. (Photo by Roman Nguyen on Unsplash)

The COVID-19 pandemic has severely exacerbated child hunger and malnutrition, with millions of South African households reportedly running out of money to buy food during the hard lockdown last year.

While child hunger and malnutrition have long plagued South African society, the problem has worsened during the past year, with data showing that throughout the hard lockdown last year, child and household hunger increased, with almost half of households running out of money for food.

The National Income Dynamics Study – Coronavirus Rapid Mobile Survey (NIDS-CRAM) stated that during April/May 2021, respondents in about 2.3 million households reported child hunger in the week before they were interviewed. Of those 2.3 million households, around 620 000 reported that a child had experienced hunger almost every day or every day the week before they were interviewed in April/May 2021.

Wanga Zembe-Mkabile, a specialist scientist at the South African Medical Research Council (SAMRC), said the situation reflects a society that has failed to cater for able-bodied, working age (18-59) adults who are unemployed.

“It shows a food system that grows more than enough food to sustain the entire population of this country, but which fails to reach the poor. It reflects persistently high levels of inequality, which have only worsened with COVID-19,” she explained.

“It reflects the ways our economy continues to exclude the poor, especially women. Women’s employment is even lower in 2021 than it was at pre-pandemic levels, according to the NIDS-CRAM Wave 5.”

Zembe-Mkabile runs studies focused on social determinants of health, in the context of maternal and child health, particularly as it relates to the role and impact of social protection/social grants on child health and wellbeing outcomes.

She noted that women will have a more difficult time recovering from the devastation caused by the pandemic than men. 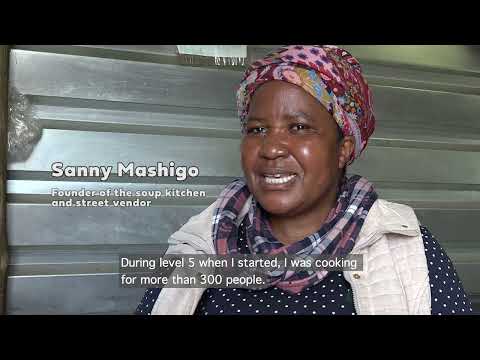 Mmasechaba has a Diploma in Public Relations, but sells “kotas” – a popular township street food – to earn a living while she looks for a job. She said volunteering at a soup kitchen and helping her mother is important because people in her community need food.

“I see many young boys and girls of school-going age walking in the street every day. I once asked one of the boys why he was not at school and he said his mom would only be able to buy him lunch for school the following week. Parents cannot afford to feed their children and are unable to take send them to school with a meal,” said Mmasechaba.

Mmasechaba’s mother, Sanny Mashigo (48), started her soup kitchen during hard lockdown last year, when she stopped working but still had stock left over.

“I started cooking for more than 300 people – men, women and small children. Eventually, some returned to work and I was feeding about 200 people. I make them bread and tea at 8h30 and at 13h00 I served lunch,” said Mashigo.

‘Too broke to pay attention’

“I continued to cook for people until my savings ran out, before asking for donations from community members and people from my church, who were willing to donate food. But we currently still have no sponsors or funds from anywhere else that are helping us. We hope that people will continue to help us feed our community until we get permanent financial support.”

Mashigo’s application to register her soup kitchen with the Department of Social Development has been delayed by the lockdown. Following the department’s approval in May, Mashigo won’t be able to collect her certificate until the country goes to lockdown level 2.

The reality of being “too broke to pay attention” is lived out by many children in South Africa. Coming from a poor home, where a daily meal is not guaranteed, means that many children go to school hungry and cannot fully participate in the classroom. 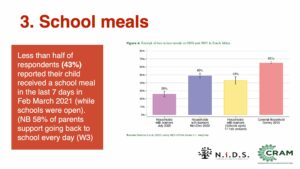 Hunger affects a child’s concentration and focus in the classroom, which is why the National School Nutrition Program (NSNP) was established. Some nine million learners receive meals on a daily basis through the initiative which enables their opportunities to succeed at school, said Lori Lake, a communication and education specialist at the Children’s Institute.

“However, when schools closed, this program was shut down and civil society had to step in and take legal action. What’s really interesting is that the court ruled that the right to education and the right to nutrition are a fundamentally intertwined, a hungry child cannot learn.”

The Children’s Institute has worked with a number of partners to draft a series of advocacy briefs looking at the impact of COVID-19 on children, children’s access to healthcare services and how these were disrupted. The institute also looked at the impact of lockdown on food security and nutrition, the impacts on violence, injury and mental health, and also the ways in which COVID-19 disrupted children’s access to essential services, such as early childhood development programs and schools.

“Covid-19 widened and deepened the impact that poverty has on children’s lives. People had to make very difficult choices around what to buy. If there’s less money to spend on food, there’s a tendency to buy more starch, and to do away with the protein and the micronutrients that are needed for optimum health and growth and development,” said Lake.

“The effect of rising unemployment and food prices, even after the easing of lockdown restrictions, was felt severely by poor households. People had to make dietary choices based on what they could afford.”

Zembe-Mkabile said that child stunting is an indicator of chronic poverty and remains high, with stunting prevalence at 27.4% pre-COVID-19 in 2016. This was higher than the 25% average for a developing country. Young children are especially vulnerable to becoming stunted.

“Child hunger can contribute to stunting, and stunting has a deleterious impact on child development and the entire life course of a child, with stunted children having higher odds of poor growth, poor cognitive development, poor educational outcomes and low economic productivity later on in life. They are also likely to suffer greater health problems associated with poor nutrition such as obesity and associated diseases of lifestyle such as diabetes,” she said.

Zembe-Mkabile also noted that children who have experienced persistent hunger are at higher risk of developing depressive symptoms later in life.

Data from the Western Cape shows that there were 23% fewer primary healthcare visits for children under five in 2020 compared to 2019.  With fewer children attending clinics, there was less opportunity to do growth monitoring to identify children who were at risk of malnutrition. Fewer children also had access to vitamin A supplementation and deworming, as well as treatment for severe and acute malnutrition.

One of the issue that the Children’s Institute’s advocacy briefs highlight are for routine healthcare services and nutrition services to be restored. They also call for the healthcare system to put proactive measures in place to identify and support children who may be at risk of malnutrition.

“If we think about the services that reach out to support very young children, health is the lead department for the first 1 000 days. So we need to be thinking about restoring growth monitoring through clinics, but also thinking about using community health workers to really reach out in innovative ways to reach children and families where they live, especially given people’s fears of COVID-19 infection,” said Lake. – Health-e News