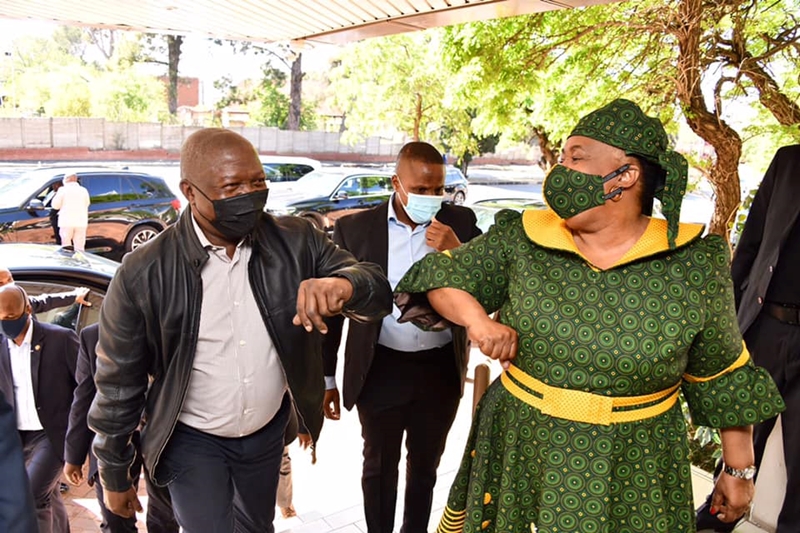 This past weekend’s Vooma Vaccination campaign went well in the Free State, but Minister of Health, Dr Joe Phaahla, has urged the province to extend its vaccination drive if South Africa wants to reach its target of population immunity by December. By Molefi Sompane.

FS Vooma Vaccination drive a success but province ‘can do better’

Phaahla and Free State Health MEC, Montseng Tsiu, visited various five mass vaccination sites in QwaQwa and Bloemfontein on Saturday, urging the mases to vaccinate so that government can reach their goal of having 70% of the country’s population jabbed in less than two months.  They were joined by Deputy President, David Mabuza.

“We are urging you to hear the call to vaccinate so that we can go back to normal. Young and old need to do their part,” Phaahla said during their visit to the Nelson Mandela shopping complex in QwaQwa.

Free State can do better

He also called on the provincial department to extend their drive and ensure the Free State keeps heading in the right direction. The province currently ranks sixth out of all nine provinces. 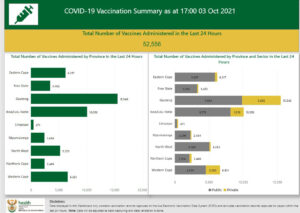 The number of COVID-19 vaccination daily doses adminstered per province as at 3 October 2021. (Photo: National Department of Health – Twitter)

Phaahla added, “I have spoken to MEC Tsiu and told her that more needs to be done by her and the government to grow the numbers even more. Gauteng and Western Cape have introduced plans to vaccinate more people and the same is needed in the Free State.”

MEC Tsiu agreed and said the province’s vaccination drive needs to go to the next level.

“As a province, we need to be more ambitious and not get comfortable with where we’re at. The health minister’s verdict is an eye-opener and has made us realise that we can expand our Vooma Vaccination drive,” said Msiu.

The MEC said that the public response to  the campaign had been positive.

“We visited QwaQwa on the second day of the Vooma Vaccination drive and we can see that the people are positive and willing to take the vaccine. Some said they had been scared by conspiracy theories, but by coming to the sites, they got to know more about the vaccine,” she added.

Minister of Health, Dr. Joe Phaahla is in QwaQwa with Ms. Montseng Tsiu, Free State MEC for Health on Vooma Vaccination Weekend Campaign. They visited 5 sites where massivevaccination is taking place. The public response to this campaign has been positive. #VoomaVaccination pic.twitter.com/DGTAw1SSRH

The Eastern Free State, known as Thabo Mofutsanyana, is one of the districts that has experienced a higher number of COVID-19 cases. Tsiu said it was important to have launched the campaign in QwaQwa.

“We do not regret bringing the campaign to this area. It has over 1 million people and it is our responsibility to help the people get vaccinated so that COVID-19 numbers can be lowered,” said Tsiu.

Free State Premier, Sisi Ntombela, meanwhile, reported that the province has so far administered close to one million jabs since the national rollout got underway. The Free State is currently sitting at 958 232.

Ntombela raised concerns over the number of active cases in the province and appealed to people to continue following all COVID-19 protocols.

While Tsiu, Phaahla and Ntombela visited sites in QwaQwa, Mabuza focused on Bloemfontein. The deputy president visited two major hosptials – Universitas Academic and Pelonomi Academic – to oversee vaccination efforts. He encouraged those who had received their first Pfizer jab to return for their second and also urged individuals to bring their family members. – Health-e News