Home » News Articles » Living with Down Syndrome: ‘Connect Through Kindness’ 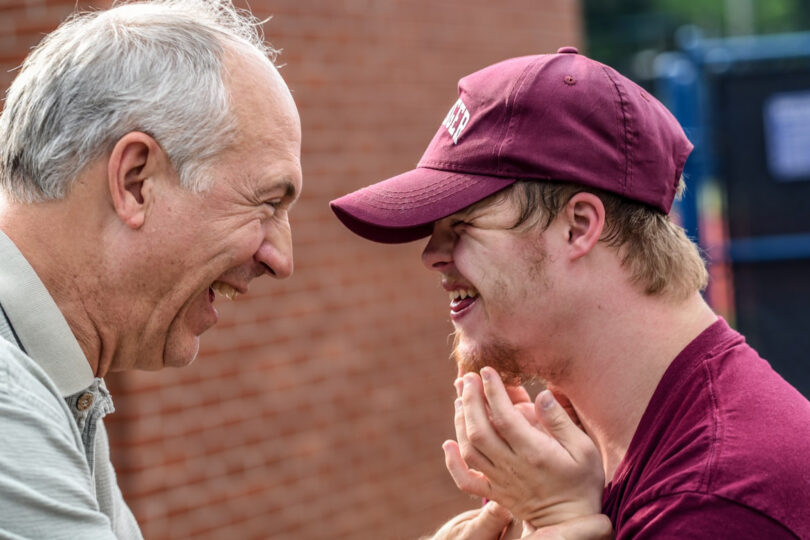 People with Down syndrome are often seen as burdens and often denied the chance to reach their full potential. (Photo by Nathan Alexander on Unsplash)

Living with Down Syndrome: ‘Connect Through Kindness’

People living with Down Syndrome deserve to have access to employment so that they can lead independent lives. October is Down Syndrome Awareness month.

“As a society, we need to ensure inclusivity and ensure that people with Down syndrome can actively participate and practice their rights,” she said.

The month of October was first designated as Down Syndrome Awareness Month in the 1980s through raising awareness about their abilities, lifestyles and achievements. The theme “Connect Through Kindness” speaks to the organisation’s call to everyone living in SA, to not forget the impact that small acts of kindness have on the lives of people living with down syndrome.

“Being isolated, not being able to see friends and family, or go to school, has affected the well-being of children living with Down syndrome. Many of them have also had difficulties with their mental health in adjusting to the new normal,” said Ramjas.

DSSA is an organisation that has empowered families and people living with Down syndrome through advocacy programs, providing educational material, raising awareness in communities, and establishing support groups for parents.

Ramjas explained that one of the challenges they have observed during the COVID-19 pandemic is the large majority of people that didn’t have information about Down syndrome in public health facilities and hospitals.

“Down syndrome is not a disease, it is not an illness, it is a condition. It is a genetic condition that is caused by an extra chromosome. So, instead of having 46 chromosomes, a person with Down syndrome will have 47. It is important to understand that there is nothing that the parents did or didn’t do in the past or present, or their environment, or habits, that resulted in having a baby born with Down syndrome,” she said.

Paediatrician and paediatric cardiologist, Mark Willoughby, conducted a study about the delay and poor diagnosis of Down syndrome in KwaZulu-Natal in 2016.

“In our study, we found that the population prevalence of Down syndrome was approximately 0.8 per 1000 population. This indicated to us that possibly many of the patients still had not had their diagnosis confirmed with a genetic test and went undiagnosed or they died before they were diagnosed from conditions associated with Down syndrome,” said Willoughby.

He suspects that the introduction of new medical technology like the amniocentesis procedure may have not had a recognizable influence on the prevalence of the births of babies with Down syndrome.

“This is because the majority of diagnoses are made in the postnatal period and very few women would have access to antenatal foetal anomaly screening outside of the major university centres in the public sector. In our study, we found that the clinical diagnosis of Down syndrome was poorest and most inaccurate in smaller / rural clinical settings. There is an overall lack of awareness of genetic services and genetic conditions in the public health sector in South Africa, particularly outside of the academic centres.”

Willoughby suggested that early detection of Down syndrome and appropriate, early screening and treatment would allow the majority of babies born with Down syndrome to have a fairly long and healthy life.

“Some parents still believe that giving birth to a child that has Down syndrome is a curse from the ancestors because of something that they may have done or their forefathers have done in the past. This is not true. A child with Down syndrome is not a curse. This is a genetic condition.”

Ramjas added that other myths about Down syndrome are that people with the condition don’t live very long; they all look the same; and, that they cannot live a normal life.

“In the past, due to a lack of medical research, people with Down syndrome were not living very long. But now, people are living an average life expectancy of 50 to 60 years. Although people with this condition do have similar characteristics, these are not everything, they still carry the physical features of their parents. Lastly, they can achieve their life goals and dreams, go to work, play sports, and do anything, given the opportunity to participate in daily life,” explained Ramjas.

“People like me were seen as a burden on their parents and society. We were hidden in institutions or at the back of homes. Sometimes our parents are still seen as people who have sinned and who have to be punished. Some people told my mother that if she confessed her sins, I would become like other children. That is why people used to hide their children in the time when I was born so that society could not judge them. No differently-abled person should be excluded from opportunities to develop. We must all work hard to reach our true potential because we all can do so,” said Brynard.

Today the 20th October marks National Down Syndrome Day, this day was created to raise awareness on the condition. It is also a reminder that we need to continue in our efforts to bring attention to the realisation that disability is not a welfare issue but a Human Rights issue

One step at a time

Brynard has her own program at a radio station in Bloemfontein on MedFM. In this program, she advocates for the rights of people living with Down syndrome and educates people about the condition.

“The elevator to success has been out of order and I had to use the stairs. I had to take one step at a time. There are no shortcuts to any place worth going to. Without shortcuts and with a lot of hard work everything worked out for me, in the end. So, if it hasn’t worked out for you yet, just keep on trying. Remember to believe in yourself.”

She is currently the only person in SA to be awarded a tertiary diploma in Educare after she studied at a National Technical College and qualified as a teacher.

“We should never think we are better than anyone else. We are all different and that is what makes us unique. As a person who is differently-abled with this condition, people tease you and stare. It is so easy to fall into depression because of how people bully and treat you because you are different. But believing in yourself and who you are in your power. Those same bullies ended up being friends with me!”

Brynard advocates for a healthy mind and lifestyle for people living with Down syndrome. She noted the importance of building one’s self-confidence and self-esteem as an important part of keeping a positive mentality. – Health-e News