Home » News Articles » Breast cancer survivor: ‘I lost a part of me, but I’m alive’ 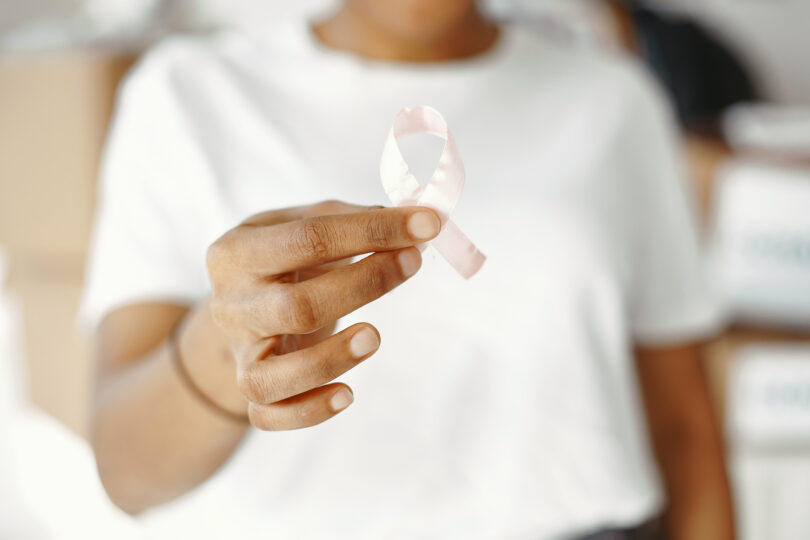 Breast cancer accounts for 16% of all cancer deaths in South Africa. (Photo: Freepik)

Breast cancer survivor: ‘I lost a part of me, but I’m alive’

A breast cancer survivor shares how her life-changing experience prompted her to become an activist in the fight against breast cancer. She is determined to educate younger women about the important of regular cancer screening as the world commemorates Breast Cancer Awareness month in October.

Norah Mufamadi tried not to pay too much attention to the pain and swelling she felt in her right breast. She woke up feeling like she was being stabbed and realised she needed help. Almost six months would pass before the cause of her agony would be diagnosed.

“It was 2018 during the month of September … I woke up and it felt like a sharp object was being forced into my breast and it was also swollen. I decided to seek medical attention at our local clinic,” said Mufamadi, a resident of Masai village outside Louis Trcihardt in Limpopo.

She went to the local clinic for help, but they could not detect the problem.

“One of the nurses at the clinic told me that the cause of the pain might be due to my contraceptive and suggested that I should consider changing the injectable contraception I was using. They gave me medications to help ease the pain,” she added.

A turn for the worst

But that December the pain worsened.

“And this time when I touched the same breast, I could feel that there was something hard inside, but I couldn’t tell what it was.”

Once the festive season was over, the 36-year-old unemployed mother of two returned to the clinic. The nurses examined her breasts and referred her to Elim Hospital. After an agonising wait that lasted several weeks, her diagnosis was revealed on Valentine’s day

“I still remember when they told me that the tests showed that I have stage three breast cancer and I would have to start treatment immediately. To be honest, I was shocked and scared at the same time. I never thought that someone like me at that age could be diagnosed with breast cancer,” explained Mufamadi.

Almost two million women are diagnosed with breast cancer globally every year, making it the most common form of cancer among women. According to Cansa general manager, Lorraine Govender, breast cancer accounts for 16% of all cancer deaths in South Africa making it a major public health problem.

“Of concern is the fact that the majority of women in SA present with late-stage disease, which is associated with a poor prognosis. In SA, breast cancer is diagnosed when women present to a health care practitioner with a suspicious symptom. Women are then referred for further tests and a diagnosis is made,” said Govender.

“Studies have shown that the time required for a cancer diagnosis may be influenced by several factors including women’s knowledge and awareness of cancer symptoms, whether women see themselves as being at risk for breast cancer, barriers or facilitators in the health system, knowledge and attitude of health providers, and psychological, and socio-cultural barriers to health care,” said Govender.

Constraints within the public health system, like the shortage of specialist surgeons, remains a problem within public hospitals. This can delay treatment while the cancer possibly spreads.  Last February, Health-e News reported that the Limpopo Health Department employed just one oncologist. The provincial health department did not respond to queries from Health-e News on whether this has changed.

In Mufamadi’s case, accessing treatment involved an almost three hour drive to the Polokwane Provincial Hospital. Although Elim hospital is just 20 minutes from her home, it does not have oncologists.

“I had to travel almost every week, sometimes once a month to the provincial hospital in Polokwane to access treatment. Although all the travelling was tough, I am grateful that Elim hospital provided me with a transport (ambulance). I received all my treatment including chemotherapy, radiation and underwent surgery – at that hosptial. Even now, I still travel occasionally for check-ups,” said Mufamadi.

She had to have a mastectomy to remove the affected breast.

“I have already made peace with as it is the reason why I have a second chance at life. I always tell myself that I have lost a part of me which I will never get back, but it saved my life. It was easy to make the decision, because it was explained to me that it was the only way to fight the disease at that time,” she said.

More public awareness is needed about breast cancer and how to detect it. Mufamadi said she thought breast cancer was a disease that only affected older people.

“Even when I was experiencing pain in my breast, it never crossed my mind that it could be breast cancer as I used to think that only the old and fragile are the ones who are at risk of developing breast cancer. Hence, at one stage during those months of battling severe pain, I once thought that I was bewitched by evil people but now I know better.”

The Breast Health Foundation states that anyone with breast tissue can develop this cancer, including men.

According to the foundation, women under 40 have a one in 230 chance of getting breast cancer. After the age of 65, this jumps to 1 in 29. Up to 25% of patients have a family history of breast and other cancers on maternal and paternal sides of their families.

What to look out for

Mufamadi has become a breast cancer activist, making use of every opportunity to educate everyone, especially young women about the importance of regular cancer screening.

“I have learned that as people, especially young women, we have to go for regular cancer screening at our public health facilities to allow health officials to diagnose diseases early. Maybe if I had known that what I was experiencing were symptoms of breast cancer, they might have been able to save my breast,” she said.

“I have now taken it upon myself to educate people about the importance of early diagnoses and how to examine their own breasts. Everywhere I go, I always preach about cancer. Even here at my own village, people know that if they need any information about breast cancer, I am always here and ready to offer a helping hand,” explained Mufamadi.

Govender warns there is an urgent need to strengthen the capacity of public health for the early diagnosis and treatment of cancer.

“Although our country has a breast cancer policy in place, more research needs to be conducted to assess the level at which this policy has been implemented. We also need to strengthen the capacity of our health care system and health services for the early diagnosis and treatment of cancer and specific barriers need to be identified throughout the entire cancer care trajectory,” said Govender.

She further added: “Studies have shown that for symptomatic breast cancer, the sooner women present themselves to health care providers, the better. This means early-stage disease and an increase in the chances of surviving breast cancer. Understanding women’s knowledge of breast cancer symptoms and how women would interpret and act on any breast changes are important in developing interventions to promote timely cancer diagnosis.”

October is commemorated as the Breast Cancer Awareness month, which is an annual campaign to raise awareness about the impact of breast cancer. – Health-e News.