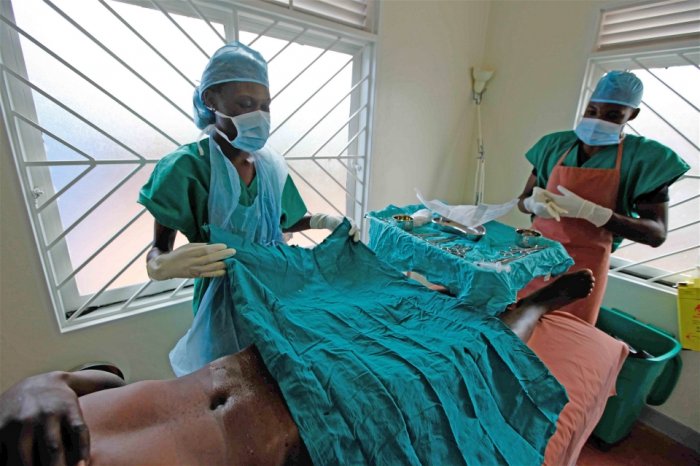 Soka spokesperson, Marvel Baqwa, says not only will medical circumcision save lives, but money as well. (Photo: supplied)

A Free State men’s health advocacy group is encouraging men and boys to consider undergoing medical circumcision instead of the traditional practice. And, in doing so, they won’t be placing themselves at risk after 13 initiates died in the Eastern Cape last year.

Culturally, circumcision is regarded as a sacred rite of passage. Every year thousands of youths enter initiation schools where circumcision is one aspect of the practice. However, as the traditional circumcisions are not carried out in clinical conditions, initiates are often injured or die.

A journey that must be taken

“Once a boy decides to go through initiation or cultural circumcision he has seen that he is a man and he needs to be initiated fully to be one,” said Mota.

He said the custom is important to his people. “As Basotho nations, we have been practicing this for ages and we are continuing today.”

Male circumcision involves the surgical removal of the foreskin which is the tissue covering the head of the penis. In adult men, it takes up to six weeks for the wound to heal. In babies, it takes about a week.

Men’s health advocacy group, Soka – a Nguni word for man – is trying to spread the message that the initiation can still be practiced with medical circumcision.

Soka’s general manager, Marvel Baqwa said they were engaging with traditional leaders to convince them it was possible to run the initiation schools but have initiates undergo medical circumcision.

At least 20 boys have died in recent weeks after taking part in circumcision ceremonies in South Africa. Genital cutting is a violation of children's rights and fundementally harmful. It's time we questioned all forms of forced genital cutting.https://t.co/7Am3EnlrC9

“We have cases of people who have come out and said that traditional circumcision schools use one or two blades for all the initiates.”

He said it is well known that circumcision has health benefits for men.

“Medical circumcision is important to men in a unique way because it helps them to be protected from STIs and other sexual illnesses,” said Baqwa.

According to the World Health Organisation (WHO), circumcised men have a lower prevalence of some sexually transmitted infections, like syphilis. Three randomised controlled trials in South Africa, Kenya and Uganda showed circumcised men have a lower risk of acquiring HIV infection. Circumcision is also associated with a lower risk of penile cancer.

It is also beneficial to women. Two studies suggest that female partners of circumcised men have a lower risk of cancer of the cervix, which is caused by persistent infection with high-risk cancer-inducing types of human papillomavirus (HPV).

Baqwa said not only would medical circumcision save lives but it would also save money. The procedure is offered at no cost at public hospitals. Soka has also partnered with several doctors to offer it as a free service.

Since it started in 2019, Soka has facilitated 250 000 circumcisions in the province.

“The lockdowns disturbed our work as we halted the services. However, we are hopeful that we will achieve our target of 350 000 by December 2022,” he said.

Thabo Thakgo, a traditional leader, said traditional practice was not meant to be run like businesses.

“From the beginning, the initiation schools were never set up for any monetary gain for initiators. It was to train boys to become strong and  healthy men. We admit that times are changing and we should also adapt and do things differently,” Thakgo said.

A mother, whose son was circumcised through the Soka programme, said she was relieved.

“My child used to be bullied by his peers who went to initiation schools and ever since he has been circumcised, the bullying has stopped.”

The COVID-19 lockdowns stopped initiation schools from operating and Soka is hoping to use this time to educate people about the benefits of medical circumcision. – Health-e News