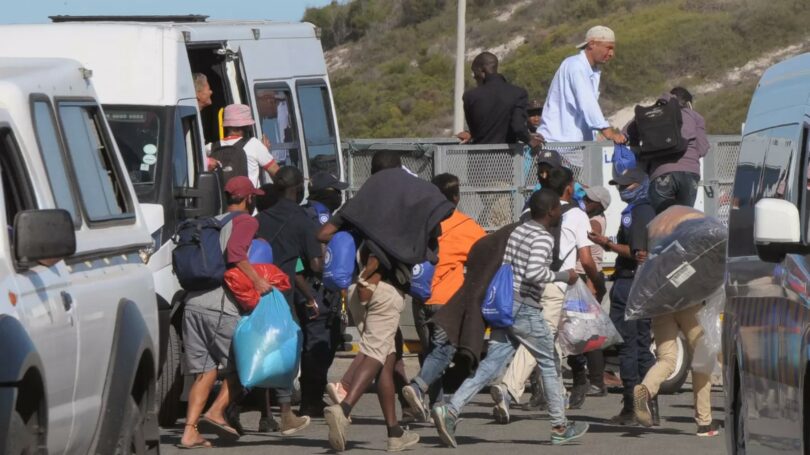 A once successful businessman shares his story of how he became homeless at the start of the COVID-19 pandemic last year. Already hooked on drugs, his life took a turn for the worst once President Cyril Ramaphosa announced the country would be going into Alert Level 5 lockdown.

Carlos Filipe Mesquita owned a record company, had won two South African Music Awards (SAMAs), and had a property in upper Sea Point. After trying out cocaine, he turned to alcohol in a bid to stop his cravings, but it didn’t work. Crystal meth became his new poison and before he knew it, he was on the streets.

Although the president mentioned that temporary shelters must be identified to accommodate homeless people for at least 21 days before handing them over to municipalities, his request to stay home wasn’t possible for thousands of destitute people.

‘More of a concentration camp’

“I was homeless at the onset of COVID-19 and was taken to the homeless camp known as Strandfontein in Cape Town. Although this was meant to be a camp to keep the homeless safe during the pandemic, we soon realised it was more of a concentration camp,” said Mesquita, who described his stay ‘as one of the worst experiences of his life.

As the country was headed for lockdown, different provincial municipalities worked with NGOs to ensure that people had shelter and were off the streets.

Mesquita, himself, didn’t need much motivation in launching the Strandfontein Homeless Action Committee (SAHC) at the end of May 2020.

The committee’s Facebook profile states: “The Homeless Action Committee was brought into being by individuals at Haven tent No 2 Strandfontein due to the numerous human rights abuses we were subjected to without a voice to protest with. We aim to continue our fight to get homeless people a voice.”

He added that the pandemic revealed the many challenges homeless people face in accessing health care services.

According BMC HealthCare, only 17% of the South African population is covered by private medical insurance schemes, the majority rely on public health services. The COVID-19 pandemic resulted in changes for many people. It resulted in millions of job and financial loss, including homelessness. A study by the National Income Dynamics Coronavirus Rapid Mobile Survey (NIDS-CRAM) showed that approximately 2.8 million people lost their jobs over the lockdown period,

According to Mesquita, the homeless camp had one doctor, one social worker and 14 nursing staff members available.  He added that a tent that had a capacity of 500, accommodated over 600 in a time where social distancing was imperative.

“Despite the obvious resultant withdrawals that would ensue from people not having access to their drugs of choice, no assistance was available in this regard. A pack with generic panado, amitriptyline, an antihistamine and myprodol was handed to everyone that had a medical complaint, be it withdrawals or a headache,” he explained.

“On the first night, one of the residents passed away and we had the body in the tent until it got dark the next evening. Some people were taken from where they slept without their HIV and other chronic medication. Twelve individuals, unable to look after themselves, were dumped among us with no services whatsoever and so it fell upon us to bathe them, clothe them and feed them.”

He explains how during medical emergencies at night, they’d struggle to alert the private security who would notify law enforcement before calling for an ambulance.

“There were individuals with catheters that were not replaced as they didn’t have staff to perform this task,” said Mesquita.

Health-e News examined the situations in other parts of the country. Durban offered a glimmer of hope for the homeless as a result of COVID-19.

The eThekwini Municipality formed a partnership with a forum of NGOs to work with homeless people. The joint effort managed to screen 2 000 street people and accommodate 1700 of them at a dozen temporary camps set up around the city.

All homeless citizens were screened for COVID-19 at the Durban Exhibition Centre and other health issues such as TB and HIV before being sent to municipality-funded camps which provided showers and toilets. Disabled or sick men were being housed at the Denis Hurley Centre, which runs an ongoing support programme for homeless people.

“A lot of lessons were learned from the hard lockdown, and ironically, in a number of cities improvements were made that have lasted: initiatives that municipalities said they could not deliver, or did not have the budget to deliver, were delivered because of COVID.  There are emergency shelters that have continued, policing practices have improved and pilot schemes have resulted in better healthcare,” said Raymond Perrier, Director of Denis Hurley Centre.

MSF to the rescue in Joburg

In Johannesburg, Doctors Without Borders (MSF) had the task of providing healthcare to people affected by homelessness living in Johannesburg shelters at the peak of the COVID-19 pandemic.

According to Claire Waterhouse, team leader of MSF’s emergency COVID-19 response project, people experiencing homelessness rarely have access to medical care, and the Joburg team, therefore, did a lot more than just screen shelter residents for COVID-19. They provided HIV and TB screenings and treatment, diagnosis of mental illnesses and counselling and provided treatment for people who use drugs.

She added that the MSF have had to find other ways to help people keep themselves protected such as mass distributions of soap, water, and, in carefully considered circumstances, reusable cloth masks.

A voice for the homeless

Mesquita says that primary care is essential to improving the health of the homeless community. He believes that care providers for homeless patients should champion three priorities: delivering trauma-informed and person-centered care, linking patients to comprehensive primary care and engaging interdisciplinary community-based services.

The 53-year-old is currently running for ward councillor for Patricia de Lille’s GOOD party in Sea Point. He has two main priorities: to establish a facility for the homeless in Sea Point and to create employment opportunities.

He has since embarked on a campaign to decriminalise the homeless community and is regularly in the news as he tries to further the SHAC’s cause.

I did a walk about in Sea Point this afternoon but in the way that I used to do it as a homeless man. I am definitely no longer as fit as I was and I now saw beautiful things I had forgotten existed. I unfortunately saw things I would rather not see: closed public toilets @ 6pm pic.twitter.com/Io9KyFdy8X

The National Homeless Network which brings together the main NGOs in the homeless sector from across the major cities, has created a National Homeless Manifesto which focuses on the five areas where municipalities can make most impact on the lives of homeless people: shelter, sanitation, healthcare, security and work.

It also demands that political parties stop ignoring the plight of the homeless and will be using the upcoming Municipal elections to draw attention to these issues and the challenges new city councils will face.

“We believe that the demands of this National Homeless Manifesto will be good for homeless men and women. They were developed in part in consultation with people directly affected,” said Perrier.

“As we have seen with COVID, keeping people well is cheaper than trying to rescue them when they are sick,” he added.

Putting a number on it

According to the Human Sciences Resource Center (HSRC), South Africa is home to approximately 200 000 street homeless people. But, credible information and statistics remain a huge challenge even without a global pandemic.

An HSRC study states that “National census data on the homeless is almost non-existent. The official census conducted by Statistics South Africa has been found to be unreliable and unsuitable for establishing absolute numbers or trends in homelessness. Research estimates on the number of homeless individuals vary. Earlier research estimates ranged from 10 000 to 50 000 homeless people. More recently, the 2008 HSRC study of homelessness estimated a national homeless population of between 100 000 and 200 000, when taking into account homeless people living in rural areas. – Health-e News