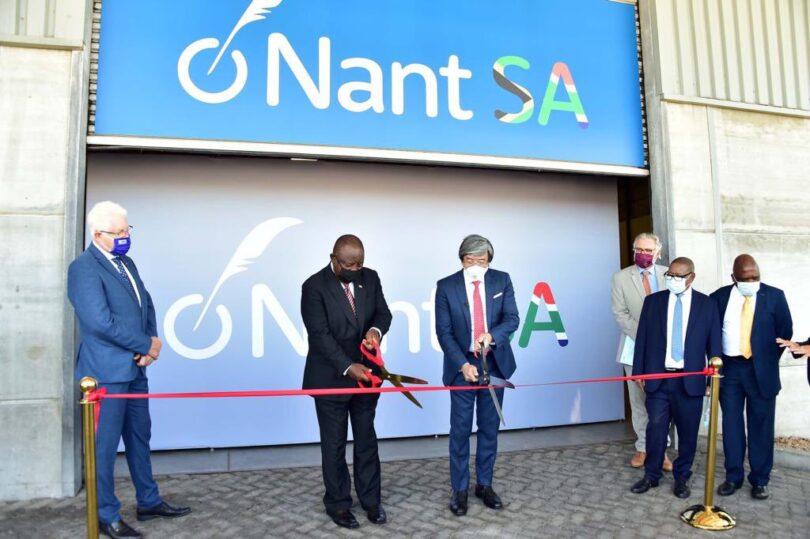 President Cyril Ramaphosa hailed the opening of a new vaccine plant in Cape Town as Africa’s ticket into a new era of health science during its launch earlier today.

“We want to manufacture this in Africa for Africa and export it to the world. President Ramaphosa said ‘come home, we will make this happen,’” said Soon-Shiong.

The NantSA vaccine production hub is situated in Brackenfell’s Brackengate Business Park. It will also produce cancer vaccines and next-generation cell-based immunotherapies which would make it the biggest such factory in Africa. Most importantly, it could speed up the continent’s COVID-19 vaccination rollout.

“This state-of-the-art vaccine manufacturing campus is part of a far broader initiative to propel Africa into a new era of health science,” said Ramaphosa.

The South African unit of Soon-Shiong’s NantWorks LLC, was established last year.  Soon-Shiong said an estimated R3 billion is needed for plants to be located in several countries.

A chance for the continent to catch up

Africa has struggled to secure vaccines while wealthy countries were administrating shots to their citizens. Statistics show that only 10.1% of the African population (1.2 billion) have been fully vaccinated compared with 62% of Americans and 72% of people in the United Kingdom (UK).

Soon-Shiong’s ImmunityBio Inc. is developing a messenger ribonucleic acid (mRNA) COVID-19 vaccine which they hope can be used as a universal booster. This could help end the pandemic by targeting the nucleocapsid protein at the core of the coronavirus which is less prone to mutation than the spike proteins targeted by other shots.

The vaccine plant which could employ between 400 to 600 people, is dependent on the vaccine which companies are developing and getting approval for. Several countries including South Africa, Botswana and Australia are currently conducting trials.

A step in the right direction

Ramaphosa said that this coalition would help Africa address its health challenges.

We welcome partnerships with entities like the Access to Advanced Health Institute, the Chan Soon-Shiong Family Foundation and NantWorks to mobilise investment, transfer technology and know-how, and develop skills. We are already seeing the benefits of this partnership. pic.twitter.com/VLKFlNLi1V

“This NantSA facility will complement the work already done by companies like Aspen, Biovac and Afrigen here in SA. Our goal is to cover the entire vaccine production value chain by upgrading existing capacity and bringing new capacity on board,” said Ramaphosa. – Health-e News