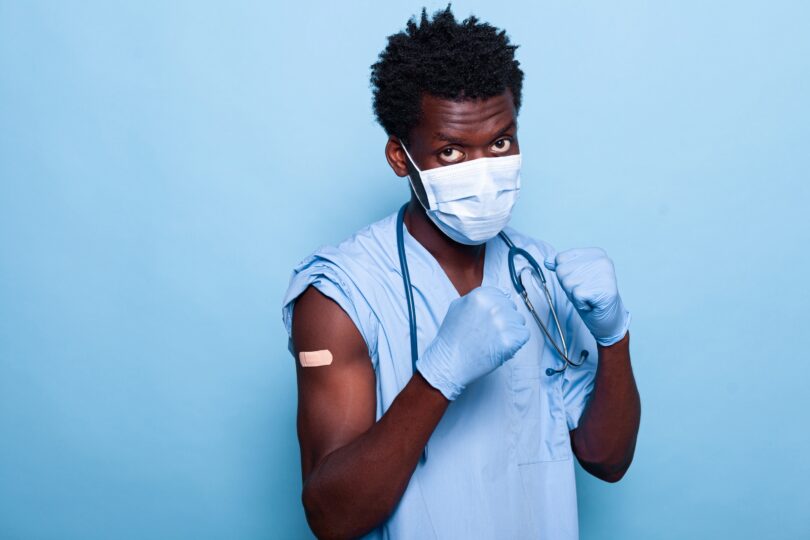 A study, released today, has provided the first global evidence that two COVID-19 doses, followed by a booster, may not provide sufficient protection against being infected with the Omicron variant.

South African and German scientists conducted the study when the Omicron variant was identified in SA last November. Seven fully vaccinated German tourists, who visited Cape Town where they got infected with the new strain, were used for the study.

The scientists were drawn from Stellenbosch University, Ludwig Maximilians University of Munich, and the Universities of the Western Cape and Cape Town, as well as the National Health Laboratory Service,

The group consisted of five women and two men, four of whom were working at different hospitals in Cape Town, while the others were on vacation.

Six of them had received two doses of the Pfizer vaccine. Five of them received their Pfizer booster doses, with the sixth opting for a Moderna Spikevax booster.  The seventh individual received an initial dose of AstraZeneca, followed by a dose of Pfizer and later a booster. All seven had high levels of specific antibodies.

During a spike in infections in the Western Cape, the visitors experienced respiratory symptoms before being diagnosed.

The authors said the group was put in isolation and they used a daily symptom diary during the 21 days. All seven of them experienced mild or moderate symptoms like shortness of breath. However, none of them required hospitalisation.

This study is the first in the world to report and characterise breakthrough infections with the Omicron variant in fully vaccinated individuals after receiving booster doses.

Booster doses were administered between 21 and 37 weeks after the second vaccine doses and breakthrough infections occurred 22 to 59 days thereafter.

This data confirms insufficient protection against Omicron infection even after receipt of a booster vaccine dose. The authors emphasise that the mild symptoms experienced may suggest that boosted vaccination still provides good protection against severe disease.

The study’s findings support the need for updated vaccines to provide better protection against infection with the Omicron variant. It also emphasised that people should still follow strict non-pharmaceutical measures for now.

Meanwhile, the World Health Organization (WHO) has confirmed that healthy adolescents and children don’t need booster shots for now. This comes after Israel announced that they had started giving children, as young as 12, booster doses. The United States, Germany and Hungary have also done so. – Health-e News