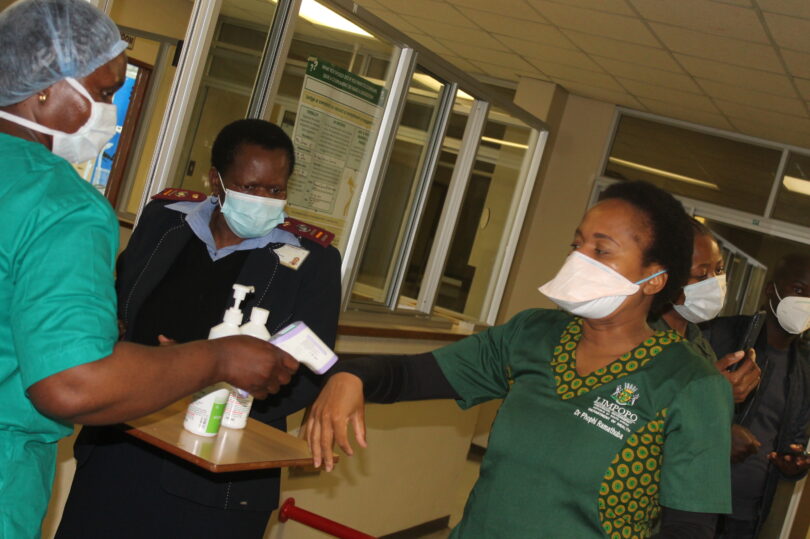 Limpopo community health workers (CHWs) are up in arms over their current employment status which denies them any access to benefits like other civil servants in the province. This, despite being on the government’s persal payroll system.

The aim of the meeting was to check on the progress made on the permanent appointments of the health workers. Prior to this visit, a memorandum was delivered during a mass protest in October last year.

But, Monyepao’s delegation emerged from the meeting disappointed and defeated.

“The MEC is not promising anything positive and this is demoralising us. Yes, the government pays us monthly stipends of R3 500 each, but this means perpetual poverty to us.  For example, I have six dependents to feed and clothe plus myself. This money gives us headaches,” said Monyepao.

“I started as a community health worker in 1999 and currently work at the Madibong Clinic in Jane Furse which is situated in the Sekhukhune District with 20 others. Most of us worked at NGOs when we started. But in 2018, we were taken on board the provincial Department of Health’s payroll persal system.”

“But when this stipend issue arose in 2018; most of us were paid only R2 100 until March the following year. Some have since received back payments, but others including myself, are still waiting,” she said.

“As CHWs, we trace chronic patients, encourage them to come for treatment and we also help register patients and compile statistics. We also screen patients for COVID-19 and other diseases,” she explained.

“I had almost given up on life when two CHWs discovered me leaning against a wall at a tavern smoking. I was thin and had no appetite for food except alcohol, regardless of brand. The two ladies talked to me nicely and convinced me to resume TB treatment,” he explained.

“When they found me, I hadn’t received treatment for a long time because some nurses shouted at us. They’d sometimes abandon us while they chatted among themselves about their cars and hairstyles. Now I am back and bear no grudges.”

Jerry Makua*, from Tafelkop in the Sekhukhune District, said he always feels a difference when treated by CHWs.

“I go to the clinic regularly for my ARV medication and when a community health worker is in attendance, I always find them approachable. I don’t know whether their love for their jobs is because of training or an attempt to impress their employer to hire them permanently. Hopefully, they don’t change when they finally become permanent workers,” Makua added.

Monyepao said that permanent appointments will keep them motivated because of pension, UIF, bonuses and other benefits.

NAPSWU provincial organizer in Limpopo, Makgabe Mmakatwane, confirmed that there are over 10 000 CHWs in the province.

“As long as these workers are exploited by government, they remain demoralised. Permanent employment means they will be appointed in terms of the Public Service Act and be regarded as public servants,” said Mmakatwane.

“We are demanding, as an interim basis, that CHWs must be on Level 2 salary of the Department of Public Service Administration (DPSA). This will, on average, give them R8000 per month with some benefits like a pension fund, UIF, and others.”

Mmakatwane also lashed out at the department for turning its back on “soldiers” who showed courage during the peak of the COVID-19 pandemic.

“We are talking about workers who were on the streets and entering homes to screen people for COVID-19.  MEC Ramathuba, boldly announced at the time, that she was deploying them to help screen and encourage people to vaccinate,” said Mmakatwane.

“Because of them, Limpopo did well with screening and vaccinations compared to other provinces. But, these workers have been denied a token of appreciation in the form of permanent positions,” he added.

NAPSWU has vowed to take its grievances to the National Department of Health if Ramathuba does not budge in the coming weeks.

Limpopo SAFTU spokesperson, Phala wa Phalakatshela, accused the provincial department of not being sensitive to the plight of CHWs “languishing under hard economic conditions”.


“Last October, we staged a march in Polokwane and again, on 9 February this year. We once again met the MEC last month, but still, she is not taking us seriously.  Let’s hope she talks sense in her upcoming budget speech,” he said.

Health-e News approached the Limpopo Department of Health for its side of the story.

Department spokesperson, Neil Shikwambana, accused NAPSWU of being dishonest about the department’s stance on the CHWs.

“The MEC made it clear that the issue of hiring community health workers permanently is not in her hands. The matter is a standing item within the chamber of the Public Health and Social Development Coordinating Bargaining Council (PHSDSBC). Their decision will provide guidance on how the sector, countrywide, will handle the matter,” said Shikwambana.

The department has also confirmed that there are over 9 000 community health workers on its payroll.

“Remember that before the R3 500, CHWs were paid through service providers who exploited some of them. The department took a decision to pay them through the persal system to avoid exploitation,” he explained.

Shikwambana said that the MEC has requested NAPSWU to bring proof of CHWs who might have been omitted from the persal system.

“The department has satisfied itself that it has paid all CHWs who qualified for the back payments. This is per Resolution 1 of 2018, as informed by the definition of a CHW, contained in the Policy Framework and Strategy for Ward Based Primary Healthcare Outreach Teams (WBPHOT),” he said.

Shikwambana also lambasted the union for portraying Ramathuba as an obstacle in the process.

“For NAPSWU, to even want to make this a matter that rests squarely on the shoulders of the MEC, is rather cheap political point-scoring,” he claimed. –Health-e News