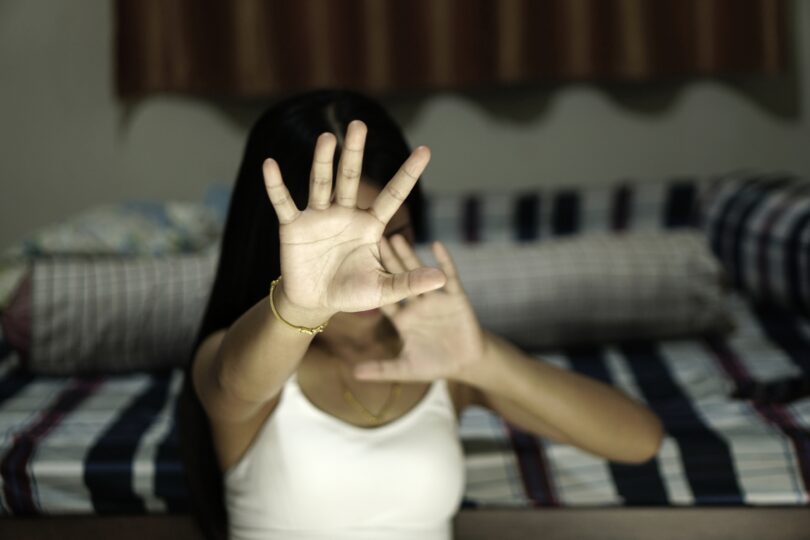 Mulalo Mutshekwa* fell pregnant in 2019 when she was 15-years-old. The grade 10 learner at the time, is from Makovha, a village in the Vhembe district in Limpopo. She was in a relationship with her then 18-year-old boyfriend.

“I met him at church,” she says. “We both attend the Zion Apostolic Church. We would see each other during conferences and that is where we exchanged phone numbers.

“We started chatting and that is when we fell in love”. During this time, Mutshekwa fell pregnant and was forced to change schools at the end of 2019.  She went to live with her boyfriend’s mother in another village, who promised to take care of her.

“My boyfriend was living with his father in another village while I stayed with his mother. When I was six months pregnant I had to go back home because his mother did not really have a stable place to live,” she explains.

Soon after, Mutshekwa and her boyfriend broke up.

With the Covid-19 pandemic in full swing,  schools re-opened in August 2020 after closing for about four months, she managed to go back to school to repeat grade 10.

“I gave birth in July. But at the end of the year, I could not get my report because they needed R250 so that they could release the report. I am not sure if I have passed or not,” she says.

“At home, they did not have money. Mind you, the baby does not get any financial support from the father and since I am still a SASSA recipient myself, so I took a decision to use my grant to take care of the baby.

What the law says

Mutshekwa’s boyfriend was already an adult when their relationship began, making it statutory rape, as defined by the law. But the teenager says she was not aware of statutory rape and what it constitutes.

Statutory rape is defined as a crime of sexual intercourse with a minor, even if the sex is consensual and not forced. This is due to the law considering a minor as too young to legally consent to sex or sexual contact.

In 2021, statutory rape – mostly reported as teenage pregnancy – took centre stage as various provincial governments released statistics on how these rates had increased during the pandemic some claiming this has been an issue for many years that was exacerbated by the pandemic. But intersectional feminist organisation Soul City Institute for Social Justice says these figures are nothing new and they have seen this over the organisation’s 28-year lifespan.

One of the key ways to stop statutory rapes from occurring is by “ensuring that young women and girls fully recognise their human rights” argues the institute’s CEO Phinah Kodisang. She says caregivers and professionals together with the government need to be aware of the duty they have to safeguard children like Mutshekwa.

“When a 10-year-old becomes pregnant and gives birth, it should raise an alarm. Everyone talks about children giving birth but not really addressing the issue of statutory rape,” Kodisang says.

However, Kodisang does not believe that young people are falling pregnant intentionally because figures released by Statistics South Africa show that the rape incidents happen mostly in the under 15-years-old age group.

“Most of the sexual violence happens in intimate or domestic relationships – a father, uncle, or neighbour raping a child. In fact, we don’t call things what they are and that is why they continue happening because we are not addressing what is right in front of us,” she argues.

Kodisang admits that there is also the culture of abusing power and wholly disregarding the autonomy of girls and women that is enabled by the patriarchal norms society encourages, something she says contributes to the abuse of women and children.

Additionally, a South African research report shows that girls are much more likely than boys to experience sexual harassment, sexual assault, and rape. A 2015 Human Sciences Research Council study found that boys, on the other hand, are much more likely to be perpetrators of such sexual violence, including within intimate heterosexual relationships which is “a key site of sexual violence and exploitation of girls and young women”.

“Boys’ abusive behaviour is directed at girls and younger or more vulnerable boys and is part of the product of a peer culture which stresses male competition and sexual prowess as part of the process of learning to ‘be a man”. Further to this, prevailing gender norms contribute to the vulnerability of sexual and gender minority youth in schools,” the report states.

The Thohoyandou Victim Empowerment Programme (TVEP) – a non-governmental organisation fighting gender-based violence (GBV) against women and children says it is difficult to deal with GBV or statutory rape because the real drivers or forces are often not addressed.

TVEP programme director Tshilidzi Masikhwa says, there is no prevention model in place to tackle GBV but the only response to the acts once they have taken place. This worsens when it comes to statutory rape.

While these are widely debunked myths, Masikhwa argues that many still believe them.

Masikhwa also notes that a lot of sexual violence takes place on school premises and admits that school teachers, in general, are also not trained to deal with it in a survivor-centred manner.

“The pilot projects we have conducted in crèches, primary and secondary schools have proven that once GBV root causes are addressed, a change in behaviour and attitude gets to happen in people’s lives,” he argues.

This includes teaching teachers and learners that sexual violence should not be normalised.

TVEP deals with over 1 000 sexual assault cases in a year in the Vhembe district, Masikhwa says. But statutory rape is difficult to address or prevent because sometimes even the survivor doesn’t know what has happened is rape.

And when minors speak out, they are often not supported.

“Some families stand in the way of justice [of]  their loved ones by accepting bribes [sometimes in the form of marriage proposals or paying “damages”] in exchange for silence and that on its own does not mean the rape did not happen,” he explains.

Meanwhile, Mutshekwa is still in school and, with the help of her mother, is taking care of her child as a single parent.

She was not aware that what happened to her constituted statutory rape.

“I did not know that being intimate at 15 with someone older is statutory rape. Had I known, I would not have involved myself in such,” Mutshekwa adds.

But it is not the responsibility of the minor – who is a rape survivor – to prevent this from taking place.

Mutshekwa’s 55-year-old mother says she was hurt and disappointed when her last born of seven kids fell pregnant but had to accept it. She, herself, was not aware that what her daughter experienced was statutory rape.

Kodisang argues: “Society teaches men they have a right to women’s bodies. Or that a woman can’t say no to sex when she is in a relationship. Men don’t seek consent from their partners, because to them, agreeing to be in a relationship is automatically consent for anything they want to do.” –  Health-e News

Rolivhuwa Sadiki is a fellow in the inaugural Kgalemelang GBV Media Fellowship, that was established by the Soul City Institute for Social Justice to enhance young journalists’ understanding of GBV, and to better report on the issue from a survivor-centred approach. Visit https://www.soulcity.org.za/