Home » Limpopo eye patients waiting in the dark for operations 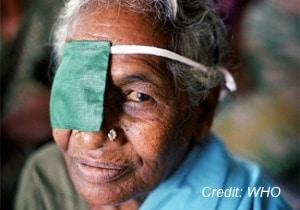 Limpopo eye patients waiting in the dark for operations

Patients in need of eye operations in the Sekhukhune and Capricorn districts in Limpopo are disappointed because the Warmbath Hospital in Waterberg District has not called them despite promising to do so a few months ago.

Joshua Leselo* (71) from the Phokoane village near Jane Furse, Sekhukhune district desperately needs an operation to restore his full vision.

“I started to lose much of my vision some three years back,” Leselo says. “I went to Jane Furse hospital in Sekhukhune district and was diagnosed with [a] cataracts, (a condition in which a person’s vision becomes cloudy leading to blindness). There is no eye doctor at Jane Furse hospital. And during September last year, I heard about FH Odendaal hospital in Modimolle in the Waterberg district which is about 300km away. I then find other patients to team up with so we can hire private cars to go there.”

He found out that before he could go to FH Odendaal hospital, bookings needed to be made at the nearby Warmbath hospital in the same district.

“Things got stuck at Warmbath hospital because nurses refused to [make a] booking for us. They told us to go to hospitals in our districts, Sekhukhune and Capricorn. We told them those hospitals are not performing eye operations. But [they] would not listen and insisted that we should go back and wait for their telephone calls.

“It is now the seventh month of waiting, and I see nothing positive, I am still in the dark, and my vision is becoming cloudy every day. It is very embarrassing to ask people to help you every time you move. I appeal to Limpopo Health MEC, Dr. Phophi Ramathuba, who is herself a medical doctor by profession, to help us,” Leselo says.

Another patient who shared transport with Leselo to Warmbath hospital is Jim Mothoa* of Mogoto, Zebediela, Capricorn district.

“I am looking forward to seeing the day when I regain my vision. But that day is not coming because Warmbath hospital nurses are not calling me as promised in February this year.

“My problem started in 2019 when my right eye started to lose vision. I went to a hospital and was told I have [a] cataract. Now the left eye is starting, my vision is smokey. It pains me when I have to ask children to guide me to the toilet. Repeated trips to Warmbath hospital produced nothing except shouts from nurses telling you to wait for their telephone call,” says the 65-year-old.

Approached for comment, Limpopo Health Department spokesperson Neil Shikwambana says though ophthalmologists were scarce in the province, no institution could deny patients health services based on regionalism.

“Affected patients should continue to do visits as they are advised by their treating doctors. And those that are referred should honour their referrals. Of course, sometimes patients do get turned back because our system gets clogged and sometimes overwhelmed due to high demand.

“But from time to time we do what we call rural health matters where we reduce backlogs through a letjema kind of project. I remember last year during Heritage Month we did over 200 eye operations at Philadelphia hospital in Dennilton, Groblersdal in Sekhukhune district,” Shikwambana says.

According to Shikwanbana, monthly eye operations in Sekhukhune are performed by visiting ophthalmologists at Philadelphia hospital.

“In Capricorn, we have an ophthalmology unit at Mankweng Hospital where people can attest that they come from Mopani, Vhembe, and anywhere from the province to receive operations,” he says.