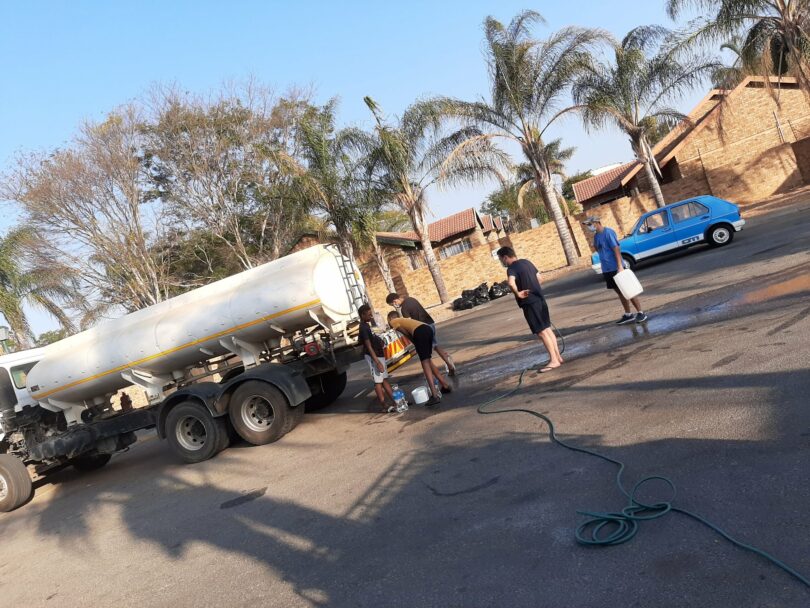 As residents in the Seshego township in  Limpopo continue to experience water cuts, the threat of contracting waterborne diseases has caused an increased sense of fear.

Taps in the township, which falls under the Polokwane municipality, have been dry for weeks.

Mpho Baloyi, 28, said the situation has become unbearable at her RDP house at Extension 76, Seshego, due to the constant lack of water.

“The stench is horrible when toilets do not flush. To avoid this, I go to the bush to answer when nature calls. I even go when I have to accompany my minor children,” said Baloyi.

“At night, the bush is very dangerous, so I make sure all used water is collected and used for toilet flushing. Sometimes, we even pour our urine into containers to mix with contaminated water for toilets,” Baloyi told Health-e News.

Moropa Chokoe* of Zone 3 in Seshego said when taps stop flowing; she often spots human faeces in the streets.

“It is disgusting but pathetic at the same time. It shows how desperate people are. They cannot go to the bush, so they wait for the cover of darkness to relieve themselves in the streets. We are exposed to severe infections such as stomach ailments and cholera for example, from our faeces,” she said.

Limpopo Department of Health said it believed water supplied by municipalities through tankers is clean and uncontaminated.

“This put residents at extremely low risk to waterborne diseases,” said a spokesperson for the department, Neil Shikwambana.

“Our health promotions are ongoing and focus on various health issues, including waterborne disease. Our health talks at clinics and through community health care workers target those communities who might be vulnerable to any illness to raise awareness on those,” Shikwambana explained.

“Water tankers are available at our disposal to supply our facilities. The supply goes to police stations for personnel, inmates and others. Our head office and regions are also catered for because water is essential for basic hygiene,” added Mojapelo.

Health-e News contacted the Polokwane Municipality via cell phone calls and WhatsApp messages for comment to no avail at the time of publishing.

“Received, we will respond,” wrote municipality spokesperson Thipa Selala. After a week of follow-ups by Health-e News there was still no response.

Meanwhile, angry residents continue to hurl abuse at the executive mayor Makoro Mpe demanding water. During a recent water protest, roads were damaged, a bus was torched, and people were prevented from travelling from Seshego township to Polokwane City for work and other businesses.

Although South Africa is not declared endemic to cholera yet, a new ‘strain’ of cholera knowns as ST75 has been identified in a few cases diagnosed in the country from 2018 through 2020.

National Department of Health (NDH) Spokesperson Foster Mohale confirmed this but said there was no need for panic.

“But this strain is not a public health threat because it does not lead to outbreaks; it is only the pandemic ‘strain’ of cholera associated with outbreaks,” Mohale said.

“Outbreaks in Mpumalanga, Limpopo, and KwaZulu-Natal are typically associated with importation events, particularly from neighbouring countries. The last cholera outbreak in South Africa was in 2008/2009, triggered by imported cases from an outbreak in Zimbabwe.

“Since then, sporadic cases of cholera have been identified, mostly in travellers returning from countries where cholera was spreading at the time,” the NDH stated.

“Healthcare professionals and laboratorians remain particularly aware of the disease and do the appropriate laboratory tests when patients have diarrhoea suggestive of possible cholera. However, healthcare professionals in all provinces will typically ask a person who has very watery diarrhoea if they have recently travelled and do laboratory tests for cholera as indicated,” Mohale added.

Cholera on the up globally

According to the World Health Organisation (WHO), since January, at least 29 countries have reported cholera cases, including Haiti, Malawi and Syria, which are facing large outbreaks.

“In comparison, fewer than 20 countries on average reported outbreaks in the previous five years. The global trend is moving towards more numerous, more widespread and more severe outbreaks. This is due to floods, droughts, conflict, population movements and other factors that limit access to clean water,” the WHO said last month.

As cholera continues to threaten several countries, the International Coordinating Group (ICG), under the auspices of WHO, has temporarily recommended a single-dose vaccine to patients in hard-hit countries instead of the standard two-dose.

“The one-dose strategy has proven to be effective in responding to outbreaks, even though evidence on the exact duration of protection is limited, and protection appears to be much lower in children. When the second dose is administrated within six months of the first, immunity against infection lasts for three years,” said WHO.

Thank you @wellcometrust and @gatesfoundation for supporting this monumental effort to manufacture oral #cholera vaccine in South Africa.

Our partnership with @biovac_inst will make a significant impact on African vaccine manufacturing capacity and the effort to #EndCholera! https://t.co/uXgFyOjdqY pic.twitter.com/7rO4eWhNFr

According to WHO, the temporary suspension of the two-dose approach is a short-term solution to preserve vaccine stockpiles.

To ease the problem in the longer term, urgent action is needed to increase global vaccine production, WHO noted. – Health-e News.