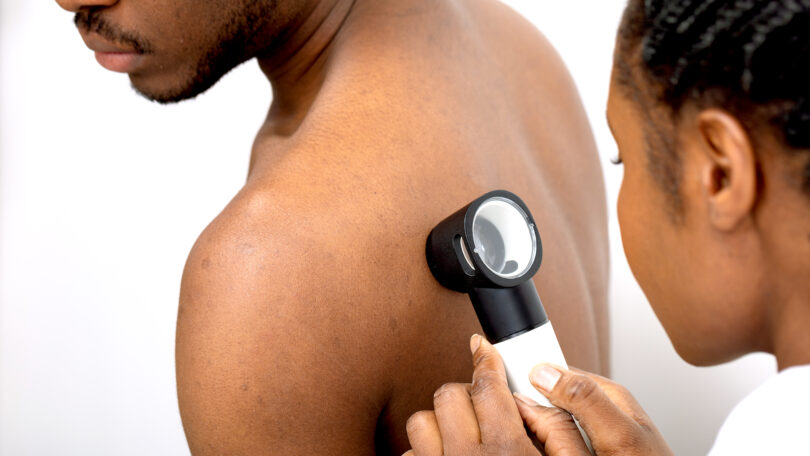 Experts offer words of wisdom on how to survive the hot summer days as we mark Skin Cancer Awareness Month from Thursday. (Photo: Supplied)

Skin Cancer: Advice? Sunscreen is it!

As we prepare to observe skin cancer awareness from 1 December to 31 January 2023, and head into hotter summer days, it is important to remember the role that sunscreen plays in skin cancer prevention.

A stage III malignant melanoma diagnosis shattered her whole world just a few weeks before her 25th birthday. She shared her experience with the cancer diagnosis and why she is an avid advocate for sunscreen.

“Nothing can prepare you for a cancer diagnosis. Nothing. I blanked out. People say when you face a tragedy your whole life flashes before your eyes. I saw nothing. I went numb,” she says.

Seboni says she believed skin cancer was a white person’s disease. “Never had I heard of a black person having such a diagnosis. In my opinion, black people just had sensitive skin, and that was that. This is what I believed growing up,” she said.

She also played many sports in school, like soccer, netball, swimming, athletics and more. Her friends teased Seboni at school for ‘wanting to be like a white girl’ because she used sunscreen.

Why would they? There was an understanding that melanin is our biggest defence against the sun, so why would anyone with darker skin buy what their skin was creating naturally? We need to educate on not only using sunscreen but also adopting more SunSmart life-saving habits,” said Seboni.

Seboni says that she rarely saw anyone in her family wearing sunscreen when she was younger, but now her mother does. I’m so proud of her. I’m not alone anymore.”

She suffered severe nose bleeds and weekly heat rashes as a child. “My skin is severely sensitive. Once I fell down a tree, the scar took over a year to heal and go away. My mom finally realised that something was up with my skin and invested in sunscreen and hats for protection,” she added.

South Africa has a high rate of skin cancer, and most skin cancers are treatable, and preventable. Protect your skin. Visit https://t.co/cEVwn5D9Xu to learn more #ProtectYourSkin pic.twitter.com/Ri51wBjJgu

The diagnosis changed her life and was not easy to deal with.

“I was already living my life being as careful as possible when it came to sun exposure, but the biggest change for me has been the mental health change. That’s why for me, it’s imperative to continue consulting with my therapist.”

Seboni’s treatment was also delayed because she ran away from the hospital after discovering her diagnosis.

“I would have received treatment immediately if it wasn’t for my six-month disappearing act from the hospital. My doctors were looking for me, but I avoided them like the plague. However, it was a quick process once I went in for treatment. I wish now that I had been mentally strong enough then to face my treatment instead of running away. I know better now and advise warriors accordingly,” she explained.

Seboni had to have surgery as a treatment option. “Cancer is a very tricky and personal disease. Two people with the same symptoms and diagnosis can get different types of treatment.”

“Cancer treatments can be as unique as our fingerprints. I was lucky. My surgical team was excellent during my surgery,” said Seboni.

“They, unfortunately, had to dig deeper than they had initially planned, but they removed cancer around my left knee and lymph nodes in my groin area like pros. When they were done, there were no visible tumour markings, and just like that, I was cancer-free.”

Seboni continued, “I sometimes feel like shouting at the top of a mountain. WEAR YOUR SUNSCREEN! Or at least wear sun-protective clothing. As with the most important morals and values one teaches a child, SunSmart habits need to be taught during those all-important developmental years.”

She said that starting children young is a win in her books. Adopting these habits throughout their lives is what counts.

CANSA  said that the incidence of malignant melanoma in South Africa is 15 times less among dark-skinned individuals than among the white population.

Malignant melanoma is one of the most dangerous forms of cancer. This is why myths and misinformation about sunscreen and protective clothing can often be dangerous and misleading.

“Anyone can get melanoma, including people with dark skin. However, it is more likely if one is white, especially with light hair and eyes. Blistering sunburns, especially as a child or teenager, as well as several large or many small moles, including beauty marks and brown blemishes, are also contributing factors,” stated Cansa.

Melanoma moles are usually black or brown, but they can also be skin-coloured, pink, red, purple, blue, or white.

If you do have moles, you should check for any changes because sometimes a change to an existing mole or normal skin is the first warning sign of advanced melanoma.

During summer, ultraviolet radiation (UV) levels are usually high. This is why you should avoid the midday sun, use good quality sunscreen, wear protective clothing, avoid tanning beds, and become familiar with the skin so changes can be noticed easily.  If anything unusual is noticed, make an appointment with a doctor and point it out to them. – Health-e News