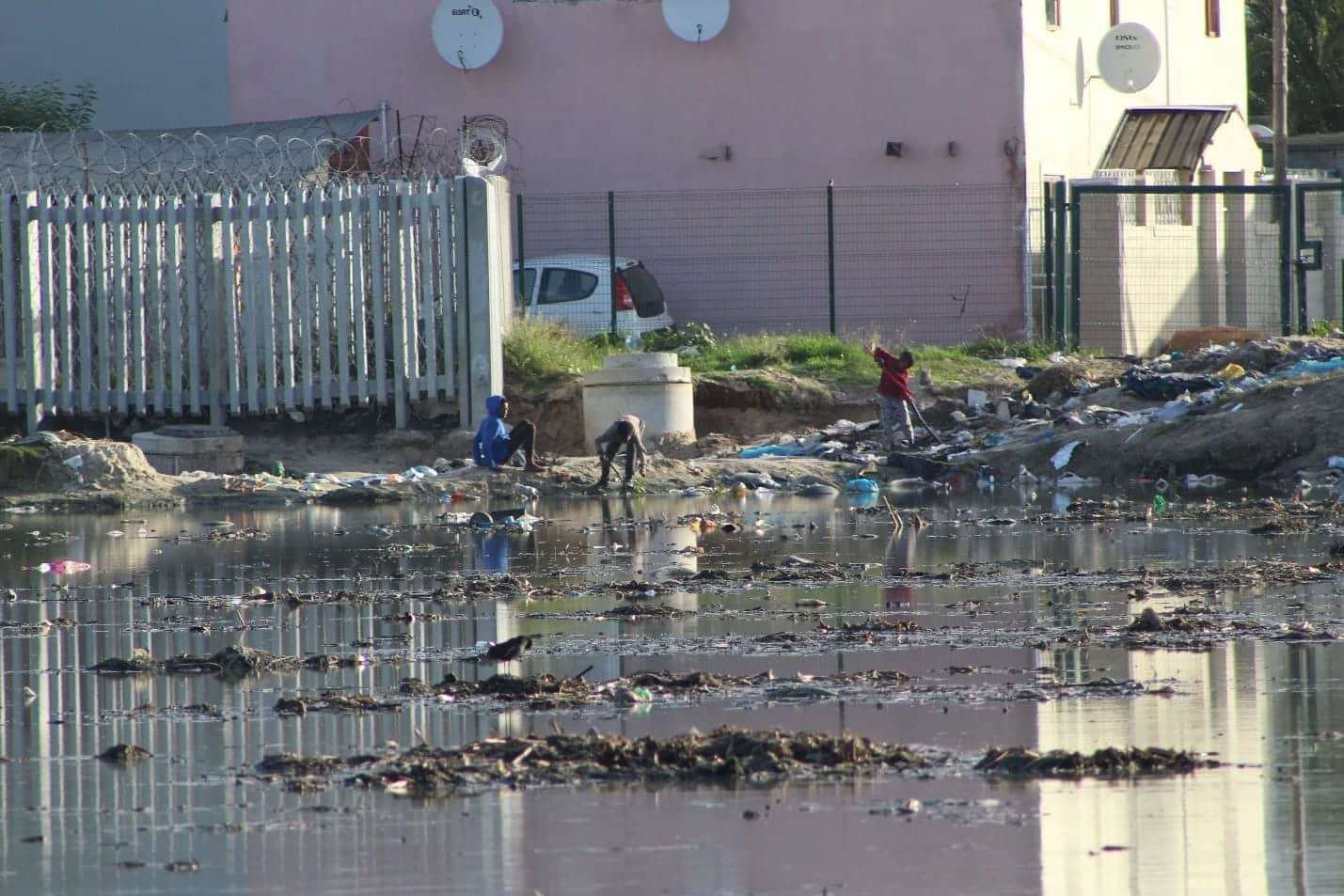 Sewage spills can cause diseases such as cholera, diarrhoea and dysentery. (Photo: Imameleng Masitha / Health-e News)

‘The rivers in Gauteng are a mess (because of repeated sewage spills), but the environment is not just some ‘by-the-way thing’ … Why are we so lenient on these municipalities?”

Read Part One and Part Two.

In short, Zuma was asking whether municipal leaders were taking the sewage crisis seriously, also noting that he had never heard of the National Treasury turning a blind eye to financial misdemeanours in government departments.

“They deal with these matters. They correct and move on. So, maybe, we should set an example. We can’t keep talking about the same thing (municipal sewage pollution) all the time.”

It was clearly a question on the minds of several colleagues who met in Muldersdrift, Gauteng, last week for the biennial lekgotla (conference) of the country’s Environmental Management Inspectorate — a specialist unit set up 16 years ago to ensure compliance and enforcement of laws for green (biodiversity) brown (pollution and waste) and blue (coastal) environmental issues.

There are roughly 3,000 Environmental Management Inspectors (EMIs) spread across the country at the national, provincial and local government level.

During a question and answer session, some inspectors and officials seemed uneasy about the apparent double standards of prosecuting private companies, while treading more softly when it comes to holding fellow state organs to account for pollution offences.

Seated near the back of the meeting hall, Mpumalanga-based Green Scorpions inspector Maanda Alidzulwi listened quietly as colleagues debated the frustrations some of them faced in enforcing environmental laws, often with limited resources.

But when he rose to speak, Alidzulwi commanded attention almost immediately.

He had done exactly as colleague Mandla Zuma suggested. He had stopped talking and taken action by “stinging” the Thaba Chweu local municipality earlier this year.

“We have a responsibility to the environment and we must not compromise,” Alidzulwi told the lekgotla, before describing the role he played in securing a historic criminal prosecution and significant fine for senior officials of a local municipality which incorporates historic and scenic tourist attractions around Lydenburg, Pilgrim’s Rest, Graskop and Sabie.

The municipal boundaries also include water catchment areas for the Vaal River which flows west past Gauteng and the Olifants River, which flows east through Kruger National Park.

Alidzulwi said several administrative notices from the Department of Water Affairs and Sanitation had been issued against Thaba Chweu municipality for polluting local rivers with large volumes of untreated sewage and for landfill site contraventions over recent years.

But these notices and directives from the government had been ignored “again and again”.

Alidzulwi said he got wind recently of a criminal docket that the national Department of Water Affairs and Sanitation had submitted to the detective branch of the Lydenburg police station.

He was expecting to find a single docket, but instead, a detective drew his attention to 10 pending criminal dockets all involving Thaba Chweu.

So he approached the Mpumalanga Director of Public Prosecutions to integrate all these complaints into a single docket, including sewage pollution offences from the Thaba Chweu wastewater works that had not been operational since 2019.

A dedicated advocate, Tula Bekwa, was appointed to lead the State investigation and very soon the municipality came to the negotiation table “when they realised that we were very much ready to go to court”, Alidzulwi told his fellow inspectors.

Initially, he said, the municipality had pleaded financial poverty for its failure to control sewage overflows into local rivers.

But, he said, Bekwa was adamant that the State would not entertain further excuses about limited budgets and insisted that the prosecution team seek maximum fines.

Following further negotiations, the State decided not to charge the municipal manager in her personal capacity as there had been previous incumbents when the offences were committed.

The final result of all this?

On 13 June (2022) Thaba Chweu (represented by Municipal Manager Sphiwe Sinkey Matsi) pleaded guilty and was fined R10-million in the Lydenburg Regional Court (with half suspended for five years, on condition that no similar offences are committed which violate the national environment or water acts over this period).

The court also ordered that municipal representatives pay a further fine of R5-million (or risk direct imprisonment for five years — both wholly suspended for five years on similar conditions). 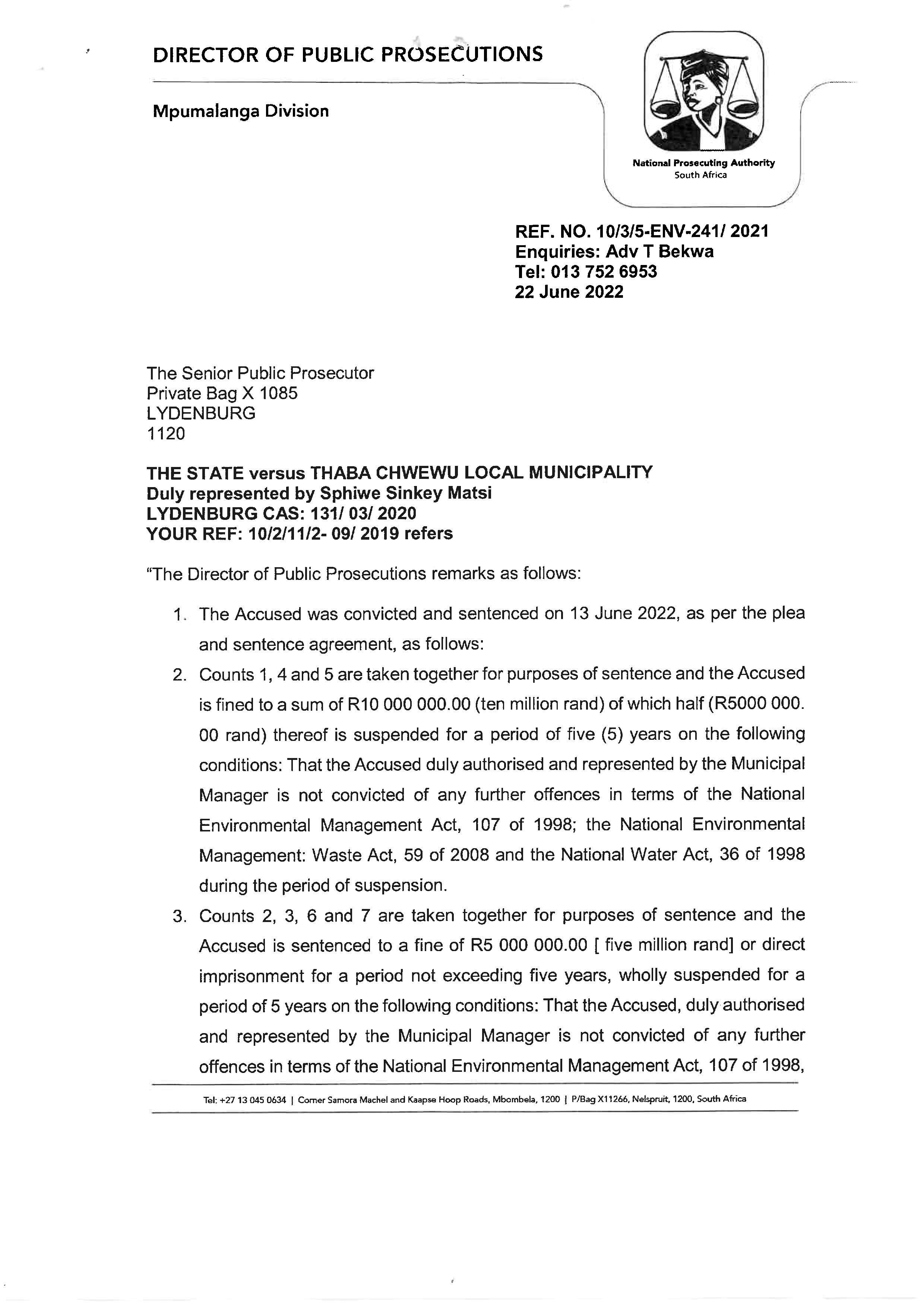 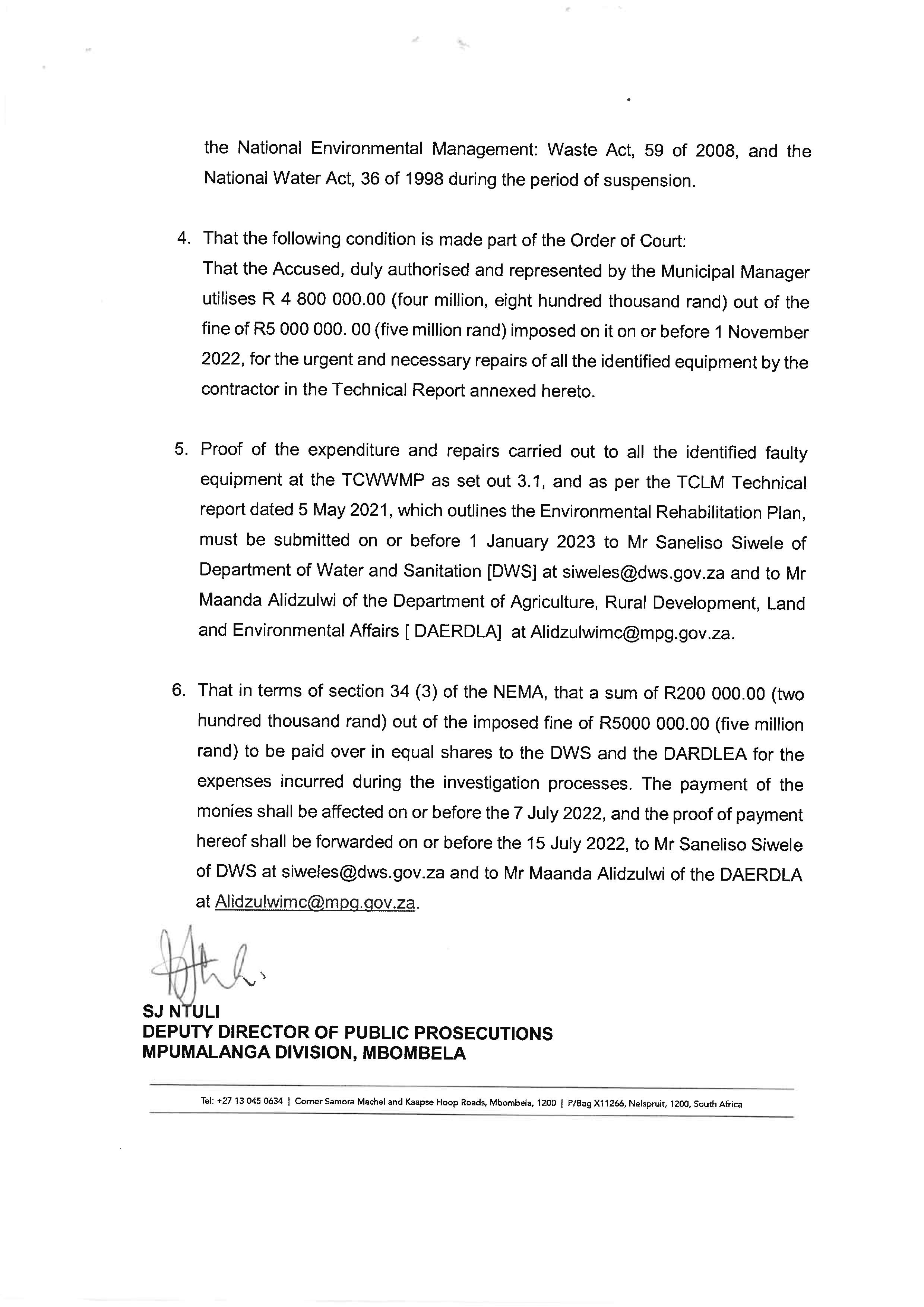 A special order was made that R4.8-million of the effective R5-million fine be used towards fixing the municipality’s collapsed wastewater treatment works and the remaining R200,000 be paid in equal shares to the national department of Water Affairs and Mpumalanga’s department of environmental affairs (Dardlea) to cover expenses they incurred during the investigation process.

And, just to ensure that the mess is fixed up properly, Thaba Chweu officials now have to submit monthly proof of expenditure for repairs to Inspector Alidzulu, along with detailed updates of their environmental rehabilitation plan.

Alidzulwi concluded his presentation by noting that: “This case has given other municipalities the heebie-jeebies”.

Perhaps. But will any other municipal managers be experiencing a scorpion sting any time soon? DM/OBP

The Green Scorpions’ latest compliance and enforcement report can be accessed here.