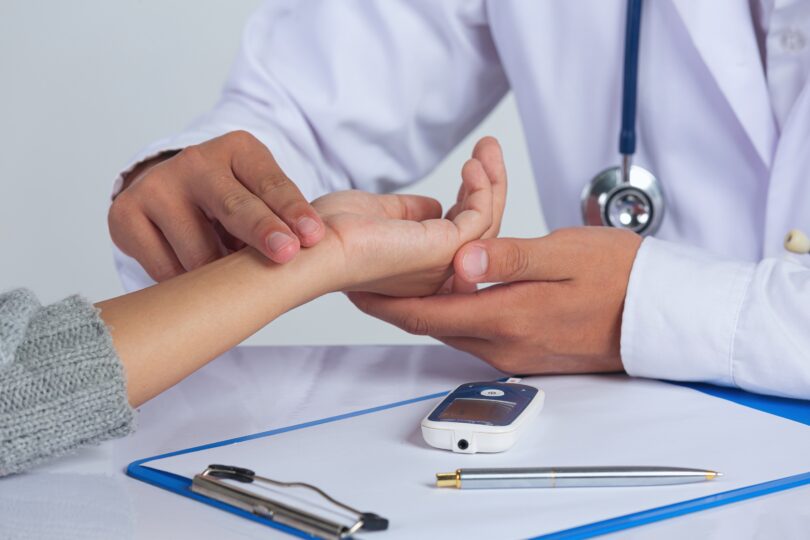 Two families in the Free State have had to find. ways to cope with their children being diagnosed with diabetes. Health-e News visited these families to find out just how challenging it is to manage this chronic condition.

Tseleng Mohono, 19, lives on a farm near Winburg. She has been living with Type 1 diabetes since 2007 when her father was still alive. She stays with her older brother, Tshepo, 27 who is a farmworker.

Having a child living with diabetes not only changed their lifestyles but also hit them hard financially since primary caregivers often have to stay home to look after the kid. Although insulin, needles, and test strips are available for free from public hospitals and clinics, there is often a chance of these facilities running out. This adds to the everyday stress of living with diabetes.

Tshepo described how his baby sister collapsed when she was only four years old.

“Tseleng got sick when she was four years old. She fainted due to high blood sugar levels and was rushed to the hospital. At first, we thought she was dead. She hadn’t been attending school due to her condition,” he explained.

“Doctors explained that people who have Type 1 diabetes, can’t use glucose (the body’s main type of sugar) for energy. That’s because their body stopped making the hormone insulin,” he said.

“Normally, after we eat, the amount of glucose in the blood (blood sugar) goes up. When it does, the pancreas sends insulin into the blood. Insulin works like a key that opens the doors of the body’s cells to let the glucose in, giving the cells the energy they need,” said Hassan.

He added: “With Type 1 diabetes, the pancreas doesn’t make insulin. Without insulin, glucose can’t get into the cells. It stays in the blood, which leads to high blood sugar. Having too much sugar in the blood isn’t healthy and can cause problems. Some problems happen quickly and need treatment right away, while others develop over time and show up later in life.”

Type 2 diabetes in children is a chronic disease that affects the way a child’s body processes sugar (glucose). Without treatment, the disorder causes sugar to build up in the blood, which can lead to serious long-term consequences.

This type of diabetes occurs more commonly in adults. In fact, it used to be called adult-onset diabetes. But, Type 2 diabetes in children is on the rise, fueled by the obesity epidemic.

Mojabeng Mafa, from Botshabelo, was diagnosed when she was 15. Her mother Maneo, 61, said her child’s diagnosis placed a lot of stress on everyone at home.

“It is the sixth year since Mojabeng was diagnosed with diabetes. She is no longer attending school and I had to stop working so we have to make do with our government grant. Mojabeng survives by injecting herself with insulin,” she said

Maneo believes there is plenty you can do to help manage or prevent Type 2 diabetes in children.

“Encourage your child to eat healthy foods, exercise, and maintain a healthy weight. If diet and exercise aren’t enough to control Type 2 diabetes in children, oral medication or insulin treatment may be needed,” she concluded.

Dr. Lois De Wilde, a general practitioner (GP) in Botshableo, said the exact cause of Type 2 diabetes remains unknown. But, added that family history and genetics play a role and that inactivity and excess belly fat, are also important factors.

“What is clear is that people with Type 2 diabetes can’t process glucose properly. As a result, sugar builds up in the bloodstream instead of doing its normal job of fueling the cells that makeup muscles and other tissues,” he said.

He highlighted the importance of food and how sugar is absorbed by the body.

“Most of the sugar in people’s bodies comes from the food they eat. When food is digested, sugar enters the bloodstream. Moving sugar from the bloodstream to the body’s cells requires the hormone insulin,” said De Wilde.

He said that insulin comes from a gland located behind the stomach called the pancreas. The pancreas releases insulin into the blood after a person eats.

“Type 2 diabetes develops when the body becomes resistant to insulin or when the pancreas stops making enough insulin. The resulting build-up of sugar in the bloodstream can cause symptoms of high blood sugar,” said the doctor.

Irene Labuschagne, a dietician from the Botshabelo Hospital, said there are less expensive ways to eliminate sugar from one’s diet.

“It is important for patients to plan their healthy meals around more non-starchy vegetables such as broccoli, spinach, and green beans. Include fewer added sugars and refined grains, such as white bread, rice, and pasta with less than 2 grams of fibre per serving,” said Labuschagne.

She added that patients should focus on whole foods instead of highly processed foods when possible.

The World Health Organisation (WHO) confirmed that the “frequency of diabetes is rising around the world, and studies are showing children are at increased risk of developing the disease. Over time, diabetes can damage the heart, blood vessels, eyes, kidneys, and nerves, causing chronic problems and early death.” – Health-e News