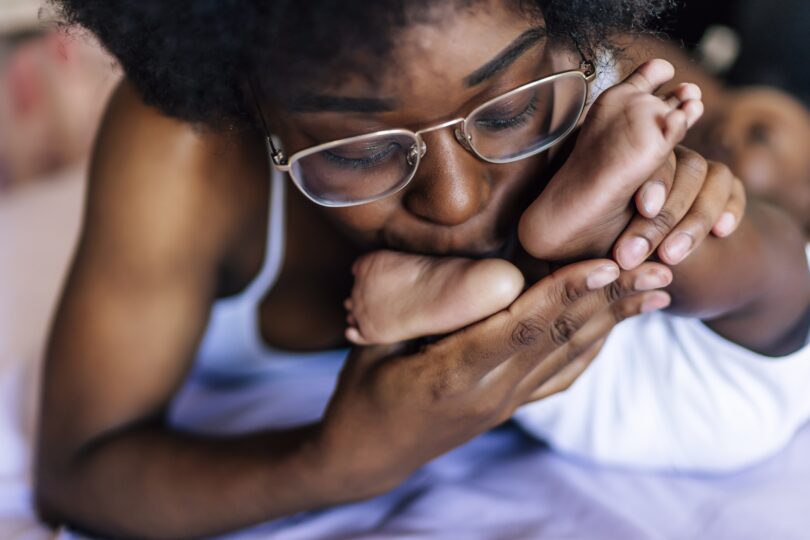 Pamela Madonsela spoke to a Cape Town-based doula who experienced obstetric violence before embarking on her journey of offering a better birthing experience to other moms.

“If I had known back then what obstetric violence was, I would have acted. Or better yet, I would’ve gotten someone like a birth doula to support me,” explained Noloyiso Williams, who went through a traumatic experience while giving birth to her first child.

She fell pregnant as a teenager and recalls what turned into a horrific few hours. It all started with a shooting pain in her tummy.

“I was just lying there until the pain became too bad to ignore, so I decided to go to the bathrooms because I thought I had a stomach bug, but little did I know that it was labour pain.

I eventually had to wake my mother up and she started panicking, asking me all types of questions. ‘How long have you been in pain? Did you see any blood on your underwear? Did your water break?’ I answered ‘huh’ since I had no idea what she was talking about. But apparently, my water had broken two hours earlier when I thought I had peed myself.

My mom managed to get hold of my dad and arranged transport to get me to the hospital. When we arrived, my mother had fetched a nurse to attend to me. She immediately checked my hospital book, which became an issue because the hospital was “outside” of my community. She and another nurse discussed this minor detail while my pain worsened.

I cried out with pain, calling out to my mother. Only then did the other nurse notice that I had blood running down my leg. They organised a wheelchair for me and took me to the labour room. They did cervical checks and set up a fetal heart monitor. That’s when they noticed that there was hardly a fetal heartbeat meaning my baby was in distress. They let my mom know they were booking an emergency caesarean and needed her approval since I was a minor. She signed the papers, and I was rushed to the theatre under anaesthesia. My son was born weighing 3.5 kg and was rushed to the NICU.

What is obstetric violence?

Communications and Advocacy Strategist at Embrace, Nonkululeko Mbuli, said that obstetric violence refers to the abuse of pregnant women and birthing people accessing care at a healthcare facility during pregnancy and childbirth. She added that it’s a violation of their reproductive health rights and basic human rights.

“This normalised state of violence against women and birthing people results in physical or psychological harm and has an enduring, negative impact on maternal health outcomes and early childhood development,” said Mbule.

Embrace “is a national movement that promotes a connected and thriving start to motherhood for every new mother in South Africa. Its vision is based on the understanding that an empowered and embraced mother raises a thriving child.”

Mbuli says this type of violence happens during pregnancy, childbirth, and post-partum.

She said violence in facility-care takes on many forms, such as:

‘Crying my lungs out’

“While the doctor was sewing me up, the anaesthesia wore off, and I could feel everything happening down there. I cried my lungs out until they administered another dose which completely knocked me out. When I woke up in the recovery ward, they explained that they were in a hurry due to the baby’s emergency and had underestimated the amount of anaesthetic they had given me,” she explained.

She said her son’s birth was so traumatic that she considered terminating her second pregnancy.

“But thankfully, God had other plans for me. I kept the baby after a series of interventions and counselling, and it made me stronger and the woman I am today. I’m a proud mother of three and a proud birth worker,” said Williams.

Obstetric violence – an act of GBV

According to Sheena Swemmer from the Centre Of Applied Legal Studies at Witwatersrand University, South Africa requires proper legislation and policy to be put in place. The egregious acts associated with obstetric violence target a vulnerable group in our society and are discriminatory, which must be acknowledged. Once it is, the law can then reflect obstetric violence as an act of gender-based violence (GBV) rather than what we currently have, which is that obstetric violence is seen as medical malpractice.

“We host community conversations and curate spaces where women who have experienced obstetric violence can share their stories. As a movement for motherhood, we advocate for obstetric violence to be on the national agenda and mobilise key stakeholders so that it grows support for victims of obstetric violence and enables collective action,” Mbuli added.

Williams is currently working at a Flourish franchise, where she trains pregnant women and doulas. Her experience has inspired her to do her bit in the community.

“My birthing experience is why I became so passionate about working with pregnant women. I became more educated as a mother and learned about the birth norms. That’s when I realised that as women of colour, our voices are often undervalued and discriminated against. We also lack access to resources and quality care,” said Williams.

A need for education

Mbuli said there is a need for continuous evidence-based clinical education in maternity care and ongoing training for healthcare workers on the rights-based approach to sexual and reproductive healthcare and obstetric violence.

“Every pregnant or birthing person has the right to dignified, respectful health care throughout pregnancy and to be free from violence and discrimination during childbirth. Obstetric violence is a form of gender violence that reflects the broader societal devaluation of women and girls in South Africa and the normalisation of violence against them. Together with other partners working to put an end to OV, we are calling for the Minister of Health and Minister of Women Youth and Persons with Disabilities to develop and cost a measurable and time-bound plan to transform the resourcing of maternal health to prevent neglect and abuse due to understaffing and under-resourcing as a matter of urgency,” said Mbuli.

In conclusion, Williams says birthing people do not have to agree with their health care providers to meet their expectations of care.

“Changing the conversation landscape between health care providers and birthing people is essential, and birth workers play a central role in that process. They can help you understand what happens during pregnancy, labour, and postpartum. This includes explanations of procedures, and we can bring sacredness and ceremony to the most mundane activities and make them the most precious. These special moments make me pinch myself, I can’t believe I’m so lucky as to create these spaces for a living,” she added.

Mbuli said women and girls who have experienced OV and their families could pursue litigation, but this can be very costly and take years. The Office of the Health Ombudsman has a free hotline at 080 911 6472. – Health-e News