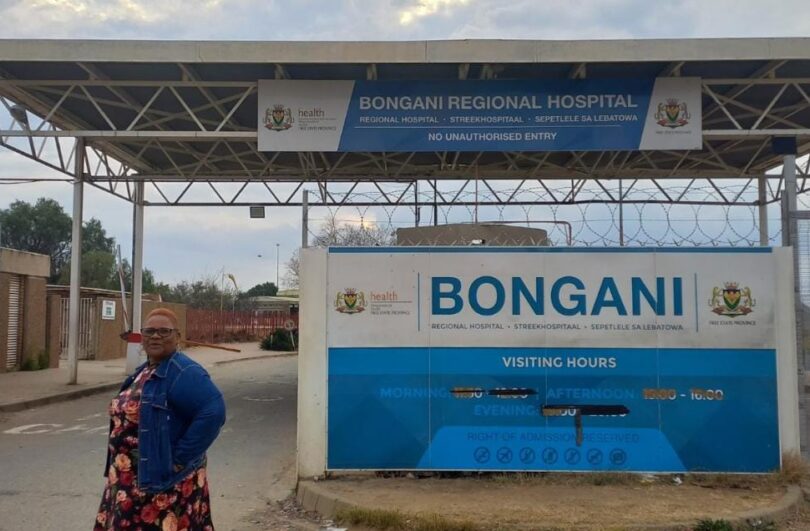 Critical procedures were put on hold while patients requiring urgent care were transferred to other hospitals after cable theft left Bongani Hospital in the Lejweleputswa District in the dark on Monday night. (Photo: Supplied)

Just as load shedding was suspended after weeks of rolling blackouts, patients at the Bongani Hospital in the Lejweleputswa District were either turned away or transferred to other hospitals following cable theft on Monday night.

The criminal act also meant that critical procedures were put on hold while electricians worked to restore power in Thabong, Welkom.

Thabo Sefala was scheduled to have an X-ray yesterday morning but had to return home.

“There was no power in and around the hospital, and we were told to go home while electricians were fixing the generators, he said.

Selina Mokwale, a type 2 diabetic patient, was due for an operation but also had to leave.

“Cable theft will cause so many deaths in Welkom. Every day, we hear of these activities, and now criminals have decided to take it to a hospital. What if the same criminal requires medical attention, to which hospital will he or she go to?” asked Mokwale.

Meanwhile, the Free State Department of Health has reported that the generators are operating.

Spokesperson Mondli Mvambi confirmed the theft. “We would like to inform the members of the public that the Eskom cable that supplies electricity to Bongani Regional Hospital was stolen on Monday, 25 July 2022.”

According to Mvambi, the hospital has been operating with generators from 21:00 on Monday until now.

Mvambi said critical services had been temporarily suspended. “At this moment, the hospital is providing emergency services with caution, and seriously ill patients are advised to be taken to other hospitals.”

“The theatre team from Bongani Regional Hospital has been instructed to evaluate available theatres in the district and around the province as a backup to be used during dire emergency cases while the cable is restored for electricity supply,” he said.

The Free State MEC for Health, Montseng Tsiu, expressed disappointment in this act as it threatens human lives who are in need of life support and emergency services.

She assured the public that they are giving this matter urgent attention. “The infrastructure services are attending to this urgent matter, and hopefully, they will restore the electricity and bring normality back in the shortest possible time. Updates will be provided to the public,” she said.

It is not yet known if there were patients who were on life support when the power went off. However, Health-e-News can confirm that over 11 ambulances were deployed to transfer patients to other hospitals.

Families are urged to contact the hospital to find out if their family members have been transferred.

Cable theft isn’t new to the residents of Thabong. Health-e news can confirm that this theft is the second major incident this year after copper was stolen from the Bambanani Mine, which has since closed.

Tsiu added that those responsible deserve to be charged with murder. “Once you threaten lives, it means you are dangerous to the community. Such theft costs people their lives and governments money. I hope the police find them,” she said.

“In Welkom, we are experiencing the mushrooming of scrapyards. Our investigators will investigate the theft, and it will be up to the National Prosecuting Authority to add a charge of murder or attempted murder if the suspects are found,” he explained. Matjhabeng Mayor, Thanduxolo Khalipa, wants illegal scrapyards shut down.

It is not yet known if there were patients who were on life support when the power went off. However, Health-e-News can confirm that over 11 ambulances were deployed to transfer patients to other hospitals.

Hunting down the suspects

“This is bad, and we are calling for members of the community to help find the responsible thugs who have put the lives of our people in danger,” said Mokhele. – Health-e News