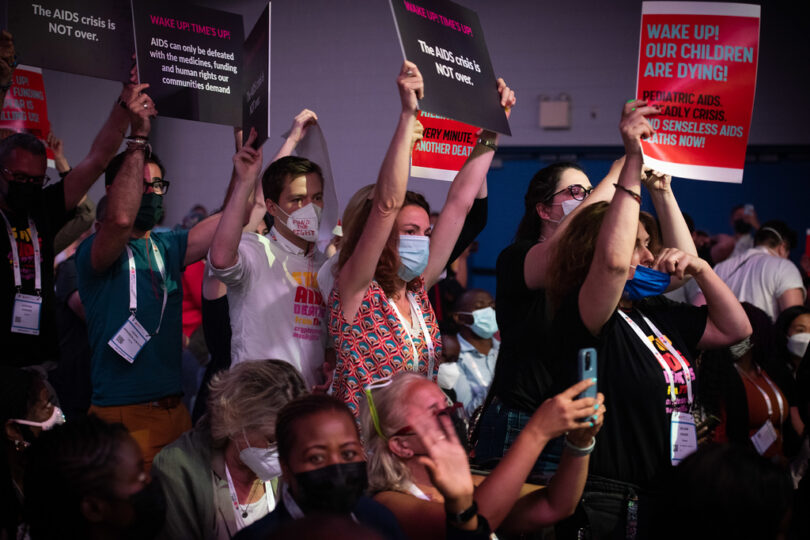 Speakers during the 24th International AIDS Conference in Montreal, Canada discussed how progress is still being made to end the HIV epidemic against all odds. (Photo: aids22.org - ©Marcus)

The opening panel discussion at the International AIDS 2022 Conference explored why and how the world must re-engage and follow the science towards our shared goal of overcoming the HIV epidemic.

Held every two years, Montreal in Canada is hosting the 24th edition, which officially started last Friday and will wrap up this Tuesday. Several global health authorities like the World Health Organisation (WHO), UNICEF and the Clinton Health Aids Initiative (CHAI) have taken to the stage. Here, they’ve revealed future research agendas and charted a new consensus to those present and a vast virtual audience.

Science has played a critical role in HIV and has provided multiple tools to end the HIV epidemic.

‘We have the tools

Executive Director of UNAIDS and Under-Secretary-General of the United Nations, Winnie Byanyima, said the tools to end the HIV epidemic in a matter of years now exist.

“650 00 people died of AIDS-related causes last year. This is one precious life every minute. On the current trajectory, millions more will die this decade,” said Byanyima.

She continued: “They are dying not because life-saving treatments don’t exist, they are dying because inequalities and greed are snatching these medicines out of their hands. Until everyone has access to the best that science can offer until everyone has their full human rights, we will never end this or any future pandemic.”

She also touched on how there is still progress taking place, against all the odds.

Bekker shared her thoughts on whether she believes the world has lost interest in the HIV/AIDS pandemic.

“To the question: has the world lost interest in the HIV epidemic? I would answer, not the whole world.”

She took a moment to remind everyone that the epidemic is a reality for the 28 million individuals who take pills every day to keep the virus in their body under control, the many who worry about possible new infections though their only crime is to want to be intimate and for those who are concerned that they might pass the virus on to their unborn child. There are also almost five million people who prefer not to test because they feel stigmatised or fear discrimination.

Such an important agency – you guys are the ⭐️ s ! Thank you for what you do to bring innovation to those who need it most!!! https://t.co/Td7Aplc8ko

Those of us here at this conference and those who were unable to join, lose sleep about the 10 million people we haven’t yet reached for treatment. The fact that we haven’t eliminated the vertical transmission of HIV in children and the dreadful truth that today 4000 individuals will become newly infected.

“The people at this conference haven’t lost interest in HIV,” said Bekker.

HIV epidemic far from over

Bekker also shared what she thinks are some of the challenges faced today: the people, the politicians, the funders, the policymakers, the world leaders and the ordinary folk who mistakenly think the epidemic is over.

She also spoke on the progress that has been made in the science world.

“In the last four decades, we’ve made incredible scientific and public health strides. We know more about this virus than any other pathogen. We have treatment that is now simplified to a single pill a day,” she said.

Bekker further explained: “We have innovation in our prevention measures that is nothing short of revolutionary and even more innovation in the pipeline, but stunningly we still have 1.5 million new infections.”

“What’s worrying is that we have 38 million individuals to find, start and help stay on life-saving therapy. Of these, 1.7 million of them are children, and we haven’t found almost half of them,” said Bekker.

Stigma and discrimination are also still a big challenge.

“We still have stigma to overcome, as well as ideology and laws that prohibit people from seeking care,” she added. “Many of the folk who live with HIV now face new challenges. They include comorbidities, cardiovascular, mental health and cancer. These all require us to think about how we can position HIV within a broader global health strategy,” said Bekker.

COVID-19 and the war in Ukraine have also had an impact on reaching set goals for HIV.

“We now need to tell a truth that convinces the world to get back on the bus. We haven’t reached our destination, a cure and a vaccine still evade us. There is much work to be done and lives to be saved”, said Bekker.

Bekker believes that public health is political and this can lead to breakthroughs and progress. She also said that politics and science are not always bad.

“AIDS has been and remains political and we’ve seen some amazing progress scientifically, but also in terms of public health benefit because when political forces are good, we see progress,” she noted.

“Where we have seen the negative impact, has been when science or the misuse of science is used as a divisive way to polarise the world and undermine public health and well-being”, she said.

According to Bekker, this leads to ambiguity, and confusion, and undermines scientific credibility and public trust. Social media in this setting is a tool which can be an enabler for negative or for positive.

“We need to once again engage and lead with the science with a clear people-centred path. This will ensure all who need it receive the best possible care and prevention,” she said.

Bekker said science is impacted by the politicisation of HIV. She said that good science can also yield negative results, but that it is never wasted.

“If we don’t re-engage, use the science and act fast, all the investment we have seen will come to nothing. Hope is alive and well. We can get there”, she said. – Health-e News

Bibi-Aisha is an award-winning journalist whose career spans working in radio, television, and development. Previously, she worked for eNCA as a specialist science reporter, and the SABC as the Middle East foreign correspondent, and SAfm current affairs anchor. Her work has appeared on Al-Jazeera, The British Medical Journal, The Guardian, IPS, Nature, SciDev.net and Daily News Egypt. She’s been awarded reporting fellowships from the Africa-China Reporting Project, Reuters Foundation, National Press Foundation, International Women’s Media Foundation. Pfizer/SADAG, and the World Federation of Science Journalists. She’s currently an Atlantic Tekano Fellow For Health Equity 2021.