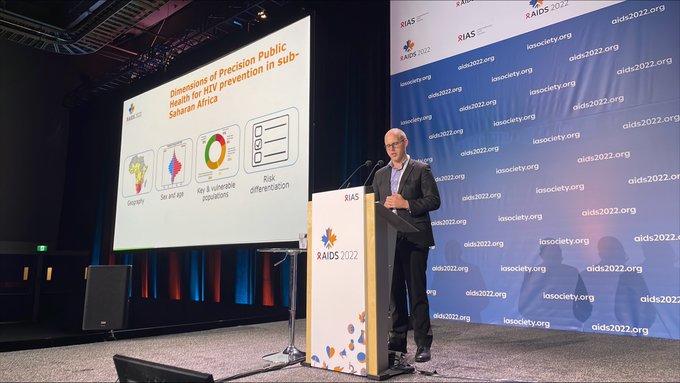 England's Jeff Eaton highlighted the importance of countries producing their own estimates with the support of UNAIDS during the fourth day of the 2022 AIDS Conference in Montreal, Canada yesterday. (Photo: IAC - the International AIDS Conference: Twitter)

Data collection and how each country can trigger action plans in the fight against HIV came under the spotlight at the 2022 AIDS Conference.

The Imperial College of London’s Jeffrey Eaton said there are opportunities to use granular data to deliver HIV prevention services more effectively.

While talking about the ‘Strengthening Health Systems’ session, Eaton referred to the Global AIDS Strategy compiled by the Joint United Nations Programme on HIV/AIDS (UNAIDS). The strategy is “a bold new approach to use an inequalities lens to close the gaps preventing progress towards ending AIDS”.

“We need to consider each of these along two axes. First, what evidence does differentiating prevention along each dimension effectively identify those with the greatest prevention need? And secondly, whether reliable and granular data exist to deliver a precision response?”

Eaton said that the difference between now and 20 years ago is that “spatial variation has moved from being a theoretical epidemiologic determinant to now having precise local level estimates for key epidemic indicators.”

“The new availability of routine health system data means that there are real data estimates in every district.”

Eaton referred to an example of the research which showed comprehensive results on the HIV status of over 30 million pregnant women tested for HIV.

“At antenatal care in 2021, New District level estimates also show the emerging impacts of geographic prioritisation strategies in hybrid locations. Treatment coverage is also highest in the Eastern districts of South Africa, where up to 25 to 30% of adults are living with HIV, Where 55% of people with HIV are on treatment.”

Eaton added that in the areas where there is a high burden of HIV, there are also those with a large number of infections; based on this, geographic differentiation has been an apparent success of the precision public health paradigm for HIV.

Eaton continued: “Sex and age stratification is another dimension where we have seen significant shifts in HIV programmes in recent years. In particular, it prioritises prevention amongst adolescent girls and young women.

He explained that understanding the intense focus on this age group included analysing data from six longitudinal cohort studies.

This also means that half of the infections were over 25. This highlighted the necessity to provide access to prevention against HIV across all ages.

“Preventing exposure to HIV infection remains one of the most powerful tools in our arsenal; from genomic data, reducing the number of men with viremia, age 25 to 39 will be one of the key drivers population new HIV, and for going forward, Sarah says how the number of untreated men aged 25 to 34, has changed over the past 20 years in South Africa.”

“What I believe is one of the best reasons after prism over the decade between 2015 and 2025. The number of untreated men with HIV in this priority age group will have decreased fourfold from over half 1,000,020 15 to 140,020 25. But most of the reduction is due to men who never became infected with HIV due to the impacts of combination HIV prevention.”

Eaton concluded with a critical message on the increasing antiretroviral medication coverage and bio suppression amongst the population.

“What is new now is the opportunity to leverage new data sources to focus better and deliver services. There is a need for  surveillance to ensure that we’re capturing data about the most marginalised populations who might not be accessing services, but it’s focused on leveraging routine health system data.” – Health-e News