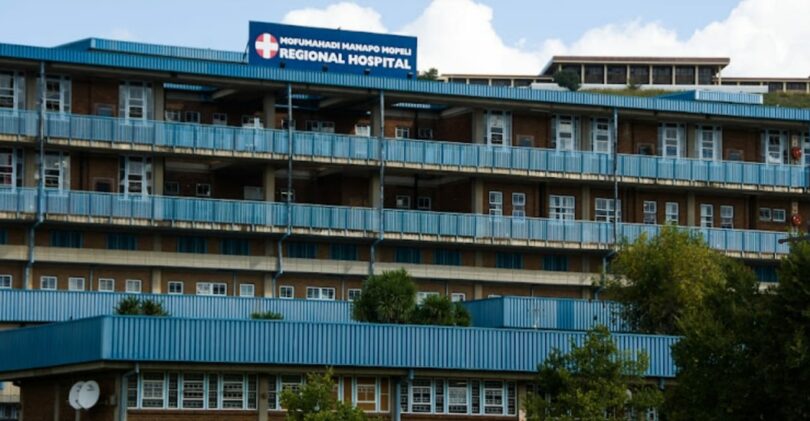 Qwa-Qwa residents claim that the declaration of the Mofumahadi Manapo Mopeli Hospital as a National Health Insurance (NHI) pilot was purely a publicity stunt. (Photo: Supplied)

NHI pilot hospital: ‘Nothing but a publicity stunt’

Qwa-Qwa residents claim that nothing has changed since the Mofumahadi Manapo Hospital was declared a National Health Insurance (NHI) pilot by former Health Minister, Zweli Mkhize.

The people of Phuthaditjhaba have labelled the move nothing but a publicity stunt.

When the disgraced Mkhize made the announcement, he promised locals that specialists would be appointed for various ailments and conditions. However, the patients claim that they still travel to Bethlehem’s Dihlabeng District Hospital or others in Bloemfontein since nothing has changed.

Resident, Teboho Mokoloko, accuses the National Department of Health of not prioritising people’s needs and not allowing them to benefit from the NHI as the bill states.

“We were taken for fools when the minister announced how NHI piloting will benefit the people of the eastern Free State. Ever since the announcement, the hospital still has doctors who work at Manapo, Dihlabeng and Elizabeth Ross,” he said.

Another resident, Tshepo Macheli, said that she ends up going to private practitioners when requiring medical services. “There’s nothing good about the hospital here. There are far too many patients for the number of medical officers available. I hope government brings the specialists it has promised us.”

David Malokase* is a male nurse at the hospital.  According to him, they are understaffed and many officers are fulfilling roles they aren’t getting paid for.

“ The NHI won’t succeed with short-staffed departments.  Most of us, in each department, are less than four during each shift and most are clerks or cleaners. The government has not hired more staff and during COVID-19, people who were temporarily employed, have been released,” said Malokase.

The National Education, Health and Allied Workers Union (Nehawu) and the Democratic Nursing Organisation of South Africa (DENOSA) have not responded to questions forwarded to them. But the health department has reiterated its stance on the Manapo Hospital.

Free State Health MEC, Montsheng Tsiu, confirmed that the specialist issue has been attended to.

“Manapo has required specialists in the medical field. When some doctors aren’t sure of some illnesses, they transfer the patient to other facilities that have the required equipment,” she said.

She added that the government is putting measures in place to ensure hospitals have the equipment they need.

“We have equipment in our hospitals. However, a district hospital cannot have what national or tertiary hospitals have. With Mofumahadi Manapo being part of the NHI, it will be beefed up to meet requirements. Remember that after this one, others will follow suit,” Tsiu noted.

Tsiu concluded: “Our people are welcome to write to me so we are aware of what they are not happy with. We again want to assure our people that the NHI is a national government programme.”

Mofumahadi Manapo is a regional hospital in the eastern Free State. It's also a pilot side for the NHI. Local residents are now asking donations for blankets for the hospital. Yet some of you still believe in NHI and the @MYANC . ncncnc… pic.twitter.com/sYzhMyyRdt

The hospital is one of two in the area and is the biggest in the region with more than 750 beds. Having been declared a pilot for NHI, locals were hopeful of receiving services equivalent to those offered at private institutions.

The government is expected to announce its analysis of how the hospital is doing as far as the insurance is concerned.

According to the NHI Bill, citizens will get help at health facilities for free. The bill acknowledges that medical services in the country are expensive and seeks to make them affordable for all. – Health-e News