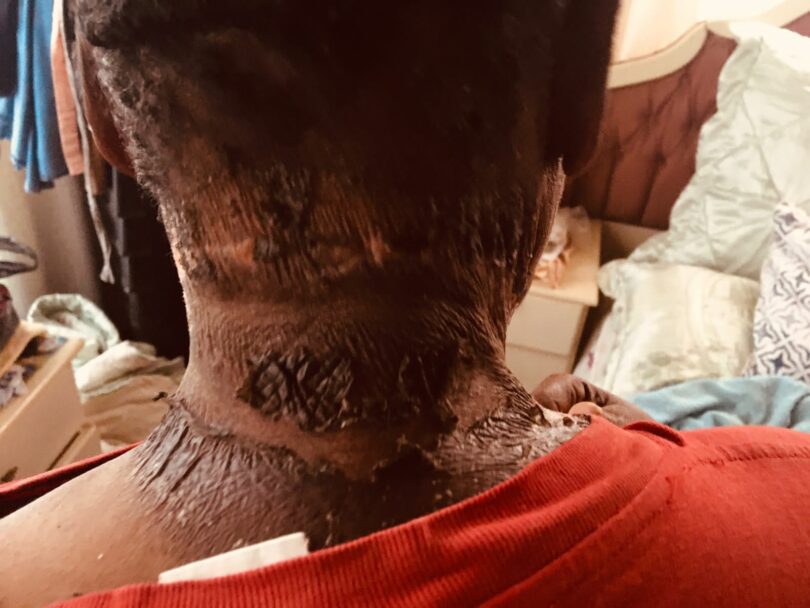 An elderly lady in Limpopo is still recovering from severe allergic reactions after a nursing sister at Rebone Clinic forced her to take cotrimoxazole tablets nearly two months ago.

Nora Mocheko, 73, pleaded with the nurses to look at her records about her severe reaction to cotrimoxazole. But according to her family members, her pleas fell on deaf ears.

Her granddaughter, Thabiso Mochiko, said her granny has since developed burn-like wounds after taking the pill on 19 June.

“The nursing sister insisted she must take the pill if she wanted her cough cured,” said Thabiso.

“My granny, still sceptical, took the pill home but didn’t drink it that day. She eventually did the next day because her cough was worsening,” added Thabiso.

She continued: “Immediately after ingesting the pill, her body reacted with burning sensations in her stomach. Severe sores, like burn-like wounds, started rapidly appearing across most parts of her body. She was moaning from pain and coughing up blood so we took her back to Rebone two days later.”

The nursing sister who issued the prescription was off duty, but those present, acknowledged knowing about the granny’s allergic reaction to cotrimoxazole.

“We begged them to clean the wounds, but they would not listen and refused to touch her. They gave us an ointment to apply on the wounds and a referral letter to George Masebe Hospital, about 120 km away in an ambulance,” Thabiso explained.

According to a referral letter from Rebone Clinic, she developed an allergic reaction to cotrimoxazole and “sustained burns-like on the neck, inner thighs, buttocks, below breasts and waist”.

A letter issued previously by a private doctor warned that she should never take Bactrim, another name for cotrimoxazole.

Forced to sleep on a bench

Despite her worsening condition with wounds becoming septic, a medical doctor at George Masebe Hospital allegedly never looked at her injuries, but only focused on the referral letter.

The doctor and nurses gave her an ointment and told her to sit on a bench. “She sat there on her painful wounds at the back. At about 11 pm, she asked for somewhere to sleep,” said Thabiso.

Nurses told her to sleep on the benches like everyone else. At midnight, she was taken to a corner where she had to sleep.

“There were no blankets and pillows and nobody asked her why she isn’t going home. She thought she was being booked for admission but no one explained to her,” she added.

Forced to go home without treatment

“Struggling to sleep in the cold with her wounds, she asked the nurse to rather call her children to come and fetch her. But the nurse allegedly wanted to know if her children have cars and if they are perhaps doctors,” said Thabiso.

The elderly woman spent the night at George Masebe Hospital and returned home the next day using public transport.

“Are elderly patients assisted based on the professions of their children and ownership of cars?” Thabiso asked.

From bad to worse

“At home, her wounds worsened and started to smell. We then took her back to Rebone Clinic, and this time, we found the nursing sister who gave her cotrimoxazole and asked her to help.

“She told us that she must first phone her superiors. After a while, she and her superiors agreed that my granny must go back to George Masebe, which wasn’t an option for us based on her first experience. We then asked the nursing sister to rather refer us to Ellisras Hospital in Lephalale,” Thabiso noted.

“We managed to reach Ellisras Hospital where my grandmother was admitted and later transferred to Pietersburg Hospital in Polokwane. She was later discharged and told to come regularly for medical treatment,” added Thabiso.

Health-e News has learnt that the elderly woman still visits the Pietersburg Hospital on scheduled days as an outpatient.

The old lady’s family believes that the Limpopo Department of Health institutions in the Waterberg District have not treated her with courtesy as stated by Bathopele Principles.

“We are waiting for what form of redress the health authorities will give our granny,” said Thabiso.

In response to Health-e News questions, Limpopo Department of Health spokesperson, Neil Shikwambana, conceded that action is yet to be taken pending internal investigations at Rebone Clinic.

“The matter is subject to investigation and we will provide feedback once it is concluded,” said Shikwambana.

He added they’d also look at the allegations of nurses and doctors treating the granny with discourtesy, violating Batho Pele principles. Shikwambana also said that the public health care service assists people regardless of their backgrounds.

“Let us wait for the outcome of the investigation so that we can be clear of the next course,” he added. – Health-e News