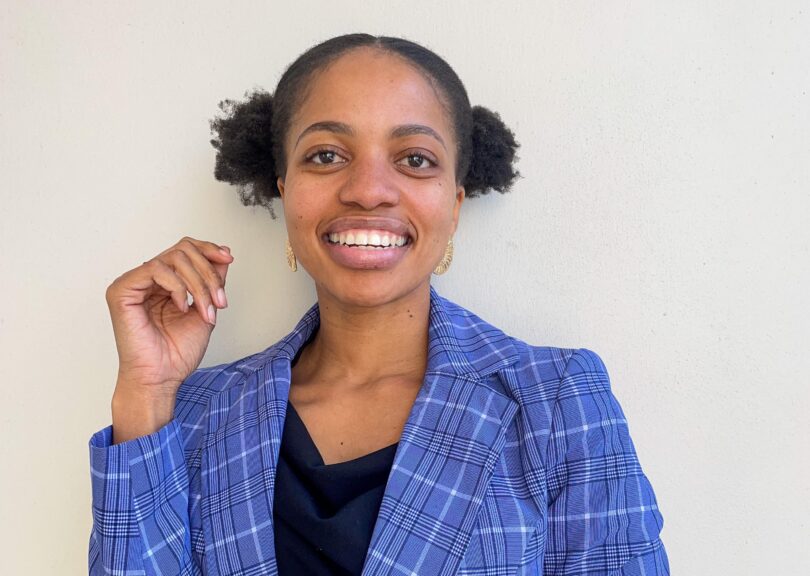 A different type of influencer: luring girls into STEM

As the country marks Women’s Month this August, there is a driven female making waves in the world of biomedical engineering.

Boitumelo Lekhoe’s passion is tangible as she explains how she got into engineering and how she’s encouraging young girls to follow a career in Science, Technology, Engineering and Mathematics (STEM).

“Engineering is fundamental to almost every aspect of our lives; the cars we drive, the bridges we cross, our mobile phones and the medical equipment we get diagnosed with,” explained the 28-year-old.

She continued: “As such, engineers are responsible for almost every aspect of society. Everything around us has a grounding in engineering and if you want to create and improve what society uses, engineering may be for you too”.

Although a myriad of things made Lekhoe go into biomedical engineering, her world opened up during a camp.

“The first thing that comes to mind is that I liked the possibility of being a medical doctor in high school, but I also liked engineering. I was caught between the two until I applied and got accepted into a Quantum Physics camp in Grade 9,” said Lekhoe. “That camp completely changed my life.”

The camp, which was held at the University of Pretoria, focused on quantum physics but also exposed attendees to careers in STEM (Science, Technology, Engineering and Mathematics). Biomedical engineering was one of the career paths under the spotlight.

“I remember walking around their campus as a 14-year-old wondering how all of those students had made it.  Everything looked so big and so unreachable”, Lekhoe recalled.

According to Lekhoe, at the time, biomedical engineering wasn’t very well established in South Africa.

“I remember thinking, ‘I don’t care if no one knows about this career. This is what I want to do.  I knew from that moment that biomedical engineering would be the career I would pursue, and I have stopped at nothing to achieve that”, she said.

However, the journey wasn’t easy for Lekhoe and she experienced loneliness during the pursuit of a career in her field.

“My journey was strenuous. It has been one of the most difficult things I’ve ever done in my life, but I wouldn’t do it any other way.

If I had to replay my life, I’d still study biomedical engineering. I moved abroad as a 17-year-old to pursue it so that should tell you how much I wanted it”, said Lekhoe.

Lekhoe continued: “What kept me going through the long nights and tedious exam sessions was remembering ‘why’. I always kept my dreams alive in my mind.”

Lekhoe said her dream is to make medical technology accessible to people in remote areas who wouldn’t ordinarily have access to this basic, yet life-saving equipment.

“For me to achieve that, I knew I needed to get through my degree, my master’s degree and currently, my training. It wasn’t easy then, and it is certainly not easy now, but it is worth it. For me, the end justifies the means,” added Lekhoe.


Finding her feet on foreign soil

One of the many difficulties Lekhoe faced was adjusting to a new environment. She moved abroad and knew no one at the time.

“I faced any difficulties that a young woman, living abroad by herself, would face. I didn’t know a single soul when I moved to study in Turkey, nor when I moved to the UK. So, it was a lonely time, but I quickly found my feet and found my way”, she said.

As a young woman in a field generally known as the ‘boys club’, Lekhoe has been subjected to gender discrimination and stereotypes. She has thought about giving up many times and wondered if she is on the right path.

“I cannot count how many times I’ve revisited my dreams and goals and wondered if I’m on the wrong path. I’ve walked into rooms and been mistaken for a patient and not the engineer that fixes medical equipment,” Lekhoe noted.

She continued: “I’ve been asked to revert to reception and wait my turn. They also asked me if I’m fixing the machine or making it worse and where the male engineers are. All this has been said to me while carrying my toolbag. So yes, my abilities have been questioned before I have been allowed to prove myself.”

Lekhoe continued: “ I have been challenged but never beyond what I knew I could deliver. That does not mean I have fixed every error I have come across or carried out every emergency corrective maintenance with minimum downtime, it means that I have bounced back after every blow”.

According to Women in Science Africa, only 13% of graduates leaving tertiary institutions with qualifications in science, technology, engineering and mathematics (STEM) are women in SA.

Lekhoe believes that more and more young girls are seeing other women in STEM fields, picturing themselves in those fields too.

“There is a famous quote by Marian Wright Edelman that states: “You can’t be what you can’t see”. Although slightly hyperbolic, there is some important truth in that.

Without other women to look up to, many young girls opt out of engineering career paths simply because they haven’t seen anyone who looks like them who has or is doing it”, said Lekhoe. 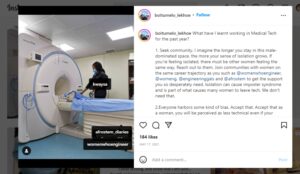 When not solving medical problems, Boitumelo likes to share moments from her day as a biomedical engineer. (Photo: Boitumelo_Lekhoe – Instagram)

She continued to explain why she calls herself an engineer by day and a STEM influencer by night.

“I think access to engineering fields and people is important. That is exactly why I try to share as much about my career as possible on social media with the hope that a young girl will see it and be curious about it,” Lekhoe explained.

“Without having had the exposure to biomedical engineering at the quantum physics camp I attended just over a decade ago, I wouldn’t have known about it. And, I certainly wouldn’t have pursued it. I do not take that opportunity of access lightly,” she declared.

Lekhoe believes that women in STEM fields are just normal women who just took an interest in fields that were designed for men.

She says that it is not the women that need to change the trajectory of their interests. It is the society that has built walls and hurdles for women pursuing STEM-related fields that need to evaluate and correct themselves.

“These are fields that may be male-dominated but fields that women have succeeded in over many years. I do not see why women still need to prove themselves.

‘Just start and be a little crazy’

That said, I think they are brave. More than being smart and hard-working, I genuinely think they are brave and maybe a little crazy. You must be a bit crazy to think that you can walk into rooms that were not designed for you and still succeed,” said Lekhoe.

Lekhoe wants young girls who are interested in STEM careers to know that the first step is to just start.

“It is not a lie that many women don’t pursue engineering because it is thought to be too hard and too physically demanding. Find out what you want to do, why you want to do it and work towards it. It will be difficult at first and you’ll get a lot of resistance, but a time will come when you’ve surmounted the opposition and the work you do will be rewarding,” she explained.

Lekhoe further added: “So, don’t let the initial push deter you from engineering. Do your research, choose your subjects, apply to the universities that offer the engineering discipline you want to get into and don’t look back.”

She also encouraged aspiring engineers to make friends with those within their fields. “You’ll need other women to encourage you when you don’t feel like pushing through.”

Standing out above the rest

Lekhoe continued: “You will face difficulties in a room people do not expect to see you in. Moreso, you will face challenges in a room with people who do not look like you, sound like you or dress like you.”

“Those difficulties will be there and it’s okay because you are breaking glass ceilings, you are challenging the status quo and challenging what people know to be true. Carry that burden but don’t let the burden break you,” she concluded. – Health- e News