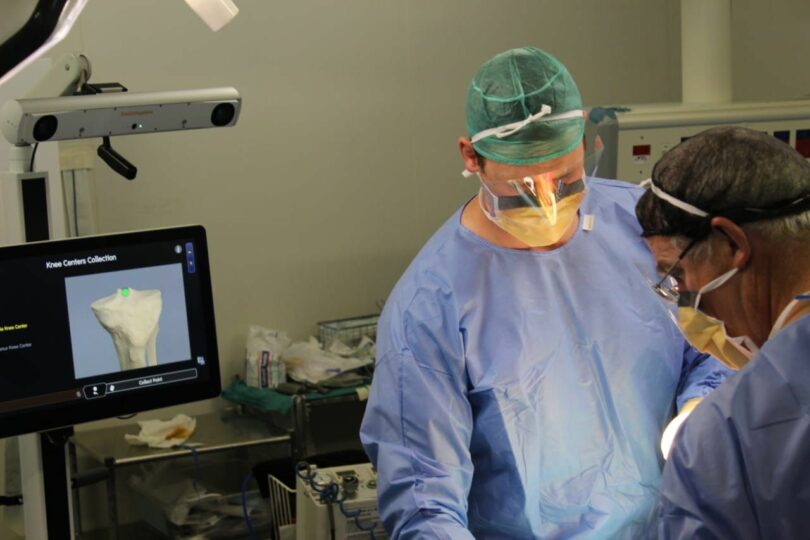 The Universitas Academic Hospital in Bloemfontein has been at the forefront of knee replacement surgery and has kept up with technological advances over the years. Their most recent beneficiary is a domestic abuse survivor who has been waiting for five years and a chance to turn her life around.

Kele Khoaele’s knee was broken during a domestic violence dispute, and the incident subsequently plunged her family into poverty. Since her groundbreaking surgery, she hopes she can secure employment.

Khoaele said what broke her heart the most was that her mother had to help her to the bathroom.

Depending on others for help

“I’d pray for death because I never thought I’ll b like a child or infant who is only given or fed by their parents at a particular time,” she said.

“At first, we faced poverty as a family and accepted the status quo but remained hopeful. The doctors also encouraged me. I’m glad I’ll be able to walk like before with the help of physio and painkillers,” she added.

During the procedure, the cartilage and the adjacent bone are removed and replaced with a prosthesis of metal and polyethene.

The patient group that benefits from this procedure usually have long-standing severe pain that does not respond to the usual conservative treatment strategies like weight loss and anti-inflammatory drugs.

Over the years, there have been significant advances in implant designs, the development of instrumentation and changes to operative protocols. Knee implant survivorship typically should be greater than 90% at the 20 years follow-up.

Thus, there is a mismatch between survivorship and satisfaction where the knee replacement remains sound, but the patient is not happy. Most research and development in the last decade on knee replacement has focused on eliminating this 20% of remaining unhappy patients.

During the procedure, the gaps created by removing bone and cartilage should be made to accommodate the prosthesis in such a manner that it should have the same balanced motion as a normal knee.

This task of creating these gaps is similar to a carpenter hanging a door in such a manner that it swings open and closed without the entry scraping on the floor.

Utilising the robot is associated with:

It has to be said that early studies have failed to show any improved survivorship compared to conventional replacements after 10 to 15-year robotic assistance follow-up. There are several ongoing studies on this subject, and time will have to tell.

These robotic systems are well established with excellent records but require a commitment by the hospital to acquire these machines as semi-permanent theatre equipment. They are large and expensive and cannot be moved from their premises.

The exception is the CORI system by Smith & Nephew, which uses a handheld platform to map bony anatomy and guide bone resection. A rotating burr resects bone in a controlled manner, only allowing the predetermined bone and cartilage resected.

It is relatively small and can be packed and transported in a large protective case. There is no need for the health authority to buy or lease the robot. This feature puts the robot within reach of the state hospital setup. It can be used on demand and ordered in advance.

A new first for knee arthroplasty as handheld robotic-assistance comes to revisions.

This effort will be part of a research project comparing the robot knee replacement with the conventional system to determine if the survivorship could be improved.

So far, all the procedures have been performed without problems, and excellent post-operative results were obtained. It is still too early to comment on the comparative results, but it looks promising, and the team is confident.

Tsiu in awe of hospital

“This is a groundbreaking advancement of the public health care service offering. Normally, only patients within the private sector have access to advances like these. But to have such specialists and equipment in a public health facility signals good prospects for the future of health care in our province,” she added. – Health-e News