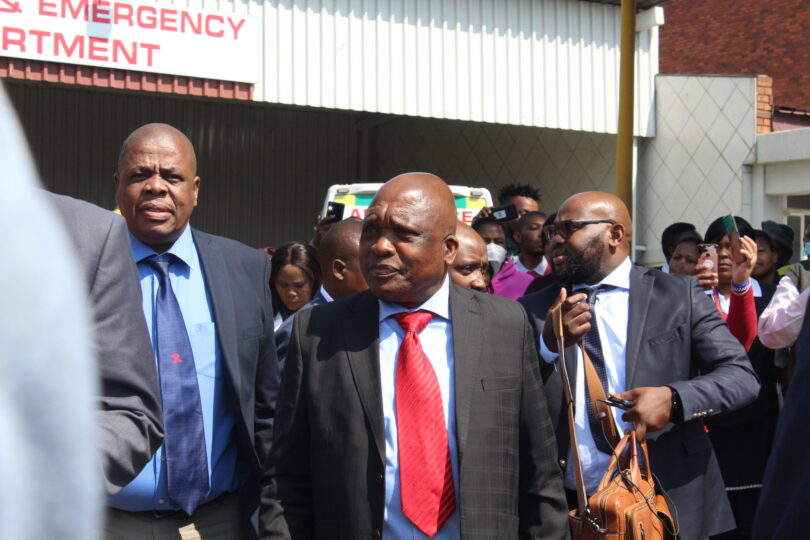 Phaahla visited the hospital after a picket by Operation Dudula outside Kalafong Hospital started to grow and gained more media attention. The organisation spent all of August outside the hospital to stop foreigners from accessing care.

However, Phaahla said the government would engage with countries whose citizens come to South Africa for treatment about compensation. Sometimes, the care needed is unavailable in their home countries.

“Where governments can sign agreements if there needs to be refunding, there could be some compensation. Our services are under pressure, and if this demand for services from across our neighbours keeps on increasing, it will reach a stage where it is not sustainable.”

But some issues go beyond funding and resources. Language barriers between migrant patients and health workers delay treatment. Phaahla said the government would ask embassies to assist so that healthcare happens efficiently.

The crowd outside Kalafong Hospital grew on Thursday amid the minister’s visit. Members of #PutSouthAfricansFirst, and some community members swelled Operation Dudula movement’s numbers.

A court order halting the protest proved useless as the chaos continued at the facility’s entrance. Phaahla said this was because police did not know they had to remove the protestors from the facility and not just observe the situation. 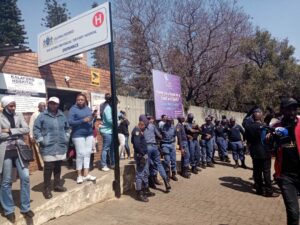 “The protests are unwarranted. Our constitution is clear. The state must do everything possible to ensure that the people who live in SA have access to health services.”

Meanwhile, 60 kilometres away at Hillbrow Community Health Centre, a new mother anxiously waited to vaccinate her baby as another anti-migrant protest raged on.

Operation Dudla prevented people they believed to be foreigners from entering the facility, carrying out spot ID checks.

“I came here yesterday (Wednesday), but the protest was happening, and I thought I would just come back today. But it hasn’t stopped, and I can’t turn back again,” said the 24-year-old mother.

*Alice Jafta, her newborn, and other mothers were crushed together as frustrated patients tried to push past Operation Dudula and the police.

Jafta, a resident of Hillbrow, was equally frustrated and said the protests prevented people from getting medical care. “We just came for the baby’s injections, but what if we came for something serious and had to wait outside.”

An exasperated Elvis Motsami had been in line since 6 am, but the protesters stopped him from entering. “I have been standing in this line since six o’clock this morning. The clinic opens at eight, and I made sure to come here early, but now these people are stopping me from getting in!”

Despite being among the first patients outside when the clinic opened, Motsamai was still waiting three hours later. “These people must move out of the way so we can get in!” shouted Motsamai. He said it didn’t matter whether undocumented migrants were allowed inside or not, as long as he got help.

“We have laws around how refugees should be treated. The Southern African Development Community (SADAC) agreement says that basic healthcare is free for everyone, so all the countries within the SADC regions have the right to access healthcare.”

Kopanang Africa Against Xenophobia is one of the organisations that filed a complaint with the Health Professionals Council of SA (HPCSA) against Dr Phophi Ramathuba, MEC of Limpopo Health, and other doctors after Ramathuba chastised a Zimbabwean patient for seeking care in South Africa.

“We are hoping that the HPCSA will hold an enquiry and if she is found guilty, her licence to practice be removed, and that she also pays a fine and the cost of holding the enquiry,” said Branken. The HPCSA told Health-e they would not comment on the matter.

Level of the impact of protest unknown

At Kalafong, anger grew as people with disabilities, some in wheelchairs, struggled to make their way through the crowd to enter the facility.

The number of South African and foreign patients either turned away or stayed is unknown. But these patients’ health was compromised.

Phaahla said the nurses at Kalafong reported pregnant women going into distress during labour. “They come during the day and are intimidated, so they go home. They come back at night with serious complications, resulting in more of them ending up in the ICU. The baby comes, and the mother is in distress. Then the neonatal ICU gets full.”

The minister said non-life threatening medical conditions could become complicated very quickly. He warned this had become common during the protest.

The minister said that the department is looking at improving the challenges faced by the health system. “We are constantly working with all the other provinces to identify weaknesses, and we can improve services. I am talking to the Minister of Treasury to try and make sure that we deal with the staffing issue and add additional posts where we can.” – Health-e News