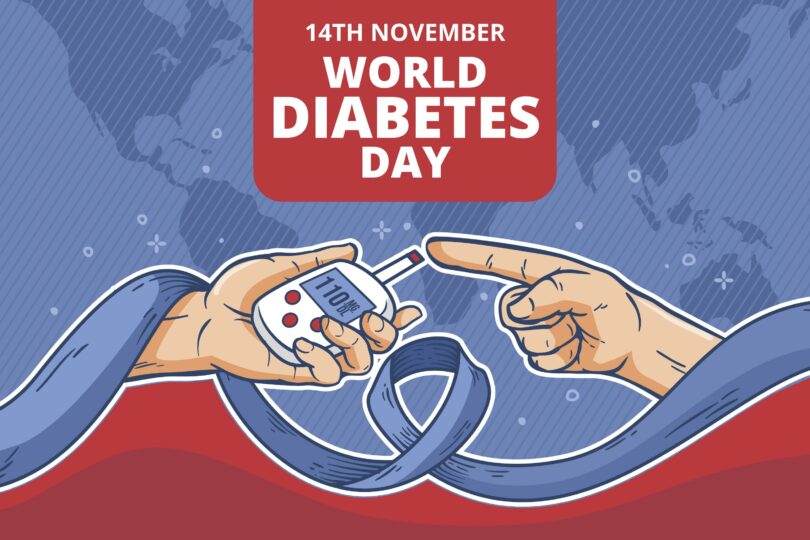 As the world marks World Diabetes Day today, a South African non-profit organisation has called for an urgent national diabetes education programme to ensure people learn how to take control of their health while living with the chronic illness. (Graphic: Freepik)

As the world marks World Diabetes Day today, the South African Diabetes Alliance has called for an urgent diabetes education programme. This will help ensure people living with the chronic illness receive the best possible care and live long and healthy lives.

This year’s theme is Access to Diabetes Care, as millions continue to have zero access globally. Back home, diabetes has been cited as the No 1 killer of women and the second leading cause of death.

The Chairperson of the South African Diabetes Alliance, Dr Patrick Ngassa Piotie said that the prevalence of diabetes in South Africa is now a public health crisis. As a result, an urgent cohesive national diabetes education programme targeting people living with diabetes, their families and healthcare workers is needed.

“A national diabetes education programme will ensure that all South Africans living with diabetes and their families receive structured and standardised quality education, which will lead to better health outcomes,” said Piotie.

The World Health Organisation (WHO) states that about 422 million people worldwide have diabetes, the majority living in low-and-middle-income countries. And about 1.5 million deaths are directly attributed to diabetes each year.

Phaahla is aware of the need

Piotie added: “The National Department of Health should bring all stakeholders together, including people living with diabetes, to develop the national education programme. The programme should be tailored to the South African context and take into consideration people’s cultures, beliefs, and backgrounds.”

The NPO has since written an open letter to the Minister of Health, Dr Joe Phaahla, informing him of the need to implement such a programme.

According to the International Diabetes Federation, 45.4% of the 4.2 million South Africans who live with diabetes are undiagnosed. Most undiagnosed diabetes cases are likely to be type 2 diabetes, which accounts for about 90% of all diabetes. Type 2 diabetes can go undiagnosed for many years because the disease can often be silent with no symptoms.

“Innovative approaches, including public-private partnerships or the use of technology and digital solutions, present opportunities to address the limited availability of resources,” said Piotie.

According to Piotie, the major factors contributing to diabetes globally are lifestyle, ageing, inactivity, obesity, and modernisation. While in South Africa, obesity is a major contributor to the diabetes epidemic, with excess body weight estimated to account for 87% of type 2 diabetes cases in South Africa.

While rapid urbanisation, characterised by the adoption of unhealthy diets with the consumption of high-fat and sugary foods and physical inactivity, is fuelling the steadily increasing obesity epidemic, with 69% of women and 39% of men in South Africa being overweight or obese.

“Diabetes is the No 1 killer of women in South Africa and the second cause of death in both men and women. Complications such as blindness, kidney failure, heart attacks, stroke, and lower limb amputation represent a huge burden on an already overstretched and resource-constrained health system. They are responsible for important human, emotional, and economic costs for the people living with diabetes, their families, communities, and the country,” said Piotie.

He believes that early detection and treatment can help prevent complications.

“Unfortunately, diabetes management and care are below standards, and people living with diabetes are not receiving quality care. The number of cases of type 2 diabetes is higher in women compared to men. This could be explained by the higher rates of obesity and insulin resistance in South African women compared to men. In addition, the prevalence of type 2 diabetes is the highest for Indians, followed by Coloureds, and lowest in Black Africans,” said Piotie.

Dr Angela Murphy is a specialist physician in the field of Diabetes and Endocrinology in Boksburg. She runs a diabetes practice incorporating the CDE Programme, Discovery Diabetes Care Programme and an accredited insulin pump centre.

Murphy further explains what type 1 diabetes is all about in a 2021 article from Diabetes SA.

“Type 1 diabetes is a genetic, sometimes hereditary, autoimmune disorder present from birth. Our immune systems should activate to attack external dangers such as infections and allergens which could cause harm,” she said.

According to Murphy, in autoimmune disease, the immune system is activated by an external trigger but then proceeds to attack the body’s cells.

“In type 1 diabetes, the target is the insulin-secreting beta-cells which lie in the islets of the pancreas. There may be more than one attack on the pancreas before evidence is seen. Insulin secretion is usually at 50% of normal before blood glucose rises significantly, causing symptoms,” said Murphy.

Murphy says that although many advances have been made to manage type 1 diabetes, we cannot claim yet to have a cure.

“Research has focused on a biological cure, but it is a technology making the greatest strides,” she said.

According to Murphy, the answer is insulin.

“Last year marked 100 years since the discovery of insulin and the fact that people diagnosed with type 1 diabetes can live a long life”, she says.

According to Murphy, a healthy, balanced diet is important for people with type 1 diabetes and will contribute to better diabetes control.

“However, the most important aspect of treatment is to ensure that there is enough insulin, at the right time, to move glucose from the bloodstream into the cells,” said Murphy.

“Trying to manage type 1 diabetes without regularly measuring blood glucose levels is like driving a car with a blindfold on. There are excellent glucometers available which allow accurate testing with results in seconds,” she added.

Murphy said the advent of continuous glucose monitoring devices has truly improved the burden of glucose testing. “Not only does it mean less, or no finger pricks, but so much more information can be seen on the continuous sensor.”

I had 4 signs that I was living with Type 1 diabetes: excessive thirst, weight loss, frequent urination, and irritability. These can be common signs of Type 1 diabetes. I’m sharing my signs so others can #SeeTheSigns. Join me and share yours #T1D #WorldDiabetesDay @BeyondType1 pic.twitter.com/ETjSsHa1R4

Having been diagnosed with type 1 diabetes earlier this year, Nkululeko Masuku, who resides in Newcastle in KwaZulu-Natal told Health-e News that he believes there is an urgent need for national diabetes education as he has realised that many people lack basic information and knowledge when it comes to the condition.

“There is a need for education. Many people, especially older people, take their insulin, but no one guides them and checks them. Some send their children to collect their insulin. I am lucky because I am active. Diabetics need to be active. I grow my vegetables, so I eat mostly a vegetarian diet. Meat and chicken are also important, but it is expensive. People battle to eat healthily, and education will help them,” said Masuku.

The beauty salon owner said he was stunned when he was diagnosed with diabetes.

“I had been experiencing severe thirst, frequently urinating, my vision blurred, and I had lost a lot of weight. It affected me.  My mother died of diabetes when she was 62, but I do not think mine was triggered by my lifestyle as I am very active and don’t carry extra weight,” said Masuku.

Not enough information was provided

Masuku says he was not provided with enough education at the health facility when he was diagnosed.

“I did not have a good experience at the health facility, and I realised I had to own my diabetes, be positive and do something about it. Sometimes, I can’t control my blood sugar, even though I am taking my medicine and following a healthy diet. I don’t eat pap and rice anymore; I eat vegetables that I grow in my garden,” explained Masuku.

“I was put on an insulin dose, but it has never been changed, and I think it needs to be adjusted. Sometimes my body tells me I am not ok. The nurses have taken blood from me twice, but the results are never discussed. I also don’t see the doctor, but I am sure I need to be seen by the doctor regularly. No one is saying anything. I was never provided with a glucometer to test my sugar levels. Sometimes the glucometers in the facility are not even working.  And I must buy expensive testing strips,” he explained.

Early symptoms of the condition

“Emphasis should be placed on raising awareness on the symptoms and the risk factors, and on screening. Screening should be guided by the presence of risk factors such as:

“Although it is important to increase screening opportunities, community screening outside a healthcare facility is not recommended. Priority should be given to targeted or opportunistic screening. For example, when a person with risk factors presents at the health facility for any reason,” said Piotie.  – Health-e News