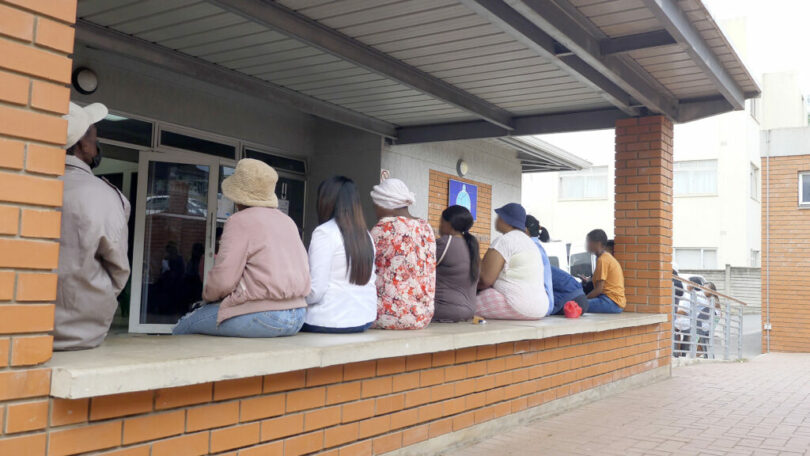 Patients wait outside the Overport Clinic in Durban. (Photo: Ritshidze)

Although public healthcare in KwaZulu-Natal (KZN) still has a long way to go, there are glimmers of hope for the province, as revealed in the latest edition of the Ritshidze report.

At least 11 key issues were examined in the second edition of the Ritshidze State of Health report.

It revealed that KZN is performing worst in providing dignified and specific services to key populations. On a positive note, it has improved its performance in several other areas, including services for people living with HIV.

Observations occurred at 130 facilities, and interviews were conducted with 7973 public health care users. Almost half, 52%, identified as people living with HIV, 68% identified as women, and 22% identified as young people under 25 years of age. The data in the report was collected between July and August this year.

One of the major barriers to accessing HIV prevention and treatment services for key populations (KPs) is being discriminated against at health facilities. The report shows that KPs often struggle to access basic tools like lubricants and condoms because they are often unavailable at facilities. They also mentioned that they are often questioned when requesting these items.

Out of 129 facility managers interviewed, only 22 facilities reported offering Post-Exposure Prophylaxis (PEP) for people who are gay, bisexual, and men who have sex with men (MSM), and only 19 facilities had lubricant.

Data reveals that only 28% of people said that the staff at facilities are always friendly and professional towards gay, bisexual and MSM. Those using drugs reported only 19%, sex workers 16% and trans people a measly 34%. This contributes to discouraging people from going to the clinic altogether.

The denial of services because people are a part of a key population group is a growing problem. A quarter of people using drugs said they have been refused access to services at the facility.

Interviews with public healthcare users show that there has been an improvement. During this reporting period, 55% of public health care users said that there are always staff at the given facilities. This has increased from 45% last year.

Last year, 19% of facility managers in 26 facilities reported enough clinical and non-clinical staff to meet the demand. This year, the report shows that little has changed.

Furthermore, just one in 10 facility managers at 23 facilities reported having enough staff in both periods. A total of 17 have improved and have enough staff for now. However, 20 facilities have worsened and cannot meet patients’ needs.

There has been no improvement in staffing levels since last year’s report, with 81% of facilities still reporting shortages and 449 vacancies still open (up from 400 last year). This means that key positions within the staff remain open, creating gaps in being able to deliver services.

Ritchie recommends that by June 2023, the KZN Department of Health should fill 70% of vacancies in the province. This includes the 449 vacancies reported at monitored sites, the remaining 30% to be filled by the end of the 2023/2024 financial year.

Secondly, the department should produce annual reports on the number of healthcare workers employed in each district. The reports must also include year-on-year comparisons from the year 2020 of the number and costs of filled posts in all districts.

The province remains the best performing, with the shortest waiting time for the second year in a row.

While overall waiting times have reduced, 48% of public healthcare users interviewed in the province still think the waiting times at the facilities are too long. At least 38% of people who identified long waiting times blamed staff shortages.

The reason public healthcare users begin queuing early in the morning is in an attempt to get services and be attended to more quickly. Anele Yawa, General Secretary of the Treatment Action Campaign (TAC), referred to the circular document issued in May 2019 by the National Department of Health. It called for facilities to open by 5amof  on weekdays and 8am on Saturdays. He said that, unfortunately, none of the KZN facilities monitored is reported to be opening by 5amof  in the week.

Only eight facilities were reported to have opened by 6am.  KZN is the only province with any facility that reported opening before 7am, while only 21 facilities opened before 8am on Saturdays.

They noted that transport services only started operating at 6am and sometimes they felt unsafe.

Waiting times have reduced from 3:20 hrs to 2:39 hrs waiting after the facility opens. 30 facilities even had average waiting times under 2 hours. Ritshidze data show that KZN continues to have the shortest waiting times of all provinces monitored this year #KZNHealth pic.twitter.com/KwxfhjWkV7

At least 17% of public healthcare users reported feeling unsafe when waiting for clinics to open.

Keeping filing systems up to date

Filing systems were observed to be in good condition in 76% of the items monitored. Almost one in five, 18%, of public healthcare users think that the waiting times are long because it takes too long to find files, the filing system is messy or files get lost.

Ritshidze recommendations include that from November 2022, the department ensures the updated 2020 adherence guidelines are implemented that state that files are not required for Repeat Prescription Collection Strategies (RPCs) facility pick up. People living with HIV should go directly to the pick-up points in the facility to collect their antiretroviral treatment (ARV) refill. They recommended the following:

People living with HIV should be able to use these extended opening times to pick up their ARVs by April 2023.

Lastly, the KZN Department of Health, BroadReach, and Health Systems trust should work together to reduce the burden on facilities by getting at least 60% of eligible people living with HIV out of the clinic into external pickup points or community utterance clubs and extending ARV refills for all schedules.

Ritshidze data reveals that there has been a major improvement, with 49% of people living with HIV interviewed reporting a three to six-month ART referral.  This is up from 31%.

However, only ensuring that 49% of people living with HIV receive a three to six months supply is low compared to other provinces. The following cut-off dates have been provided to ensure those living with HIV have access to ARV refills, among others.

The KZN Department of Health, BroadReach, and Health Systems Trust should continue efforts to restart and re-establish adherence clubs in the province to provide PLHIV with options for quicker ART collection together with peer support and treatment literacy.

Deputy Director of Public Healthcare Services, Nohlanhla Masondo, from the eThekwini Health District Office, responded to the findings with an apology.  She said that the department is working hard to improve accessibility to services, denial of services or treatment to KPs, and the humiliation that has been imposed.

“We know it is bad, but today we have seen how bad it is. We apologise. I assure you all that the department is trying to make sure that all of these things are improved because we know about them,” said Masondo.

Masondo emphasised that public healthcare users could refer to the suggestion and complaint boxes at facilities to relay their grievances. To escalate their complaints, she said people could refer to posters in the facility with the contact numbers of facility managers who can assist.

“If there is still no joy from this, then these complaints will be addressed at the necessary levels,” she added.

“It is very poor. The facilities are registering people on the programmes, but the numbers are not rising because people do not go there to collect their medication. They end up defaulting,” she said.

Masondo added that nurses must be moving up and down the facility and that this should not be perceived as them dodging their duties.

“Patients can be very difficult,” she said.

“And maybe people do not understand the nature of the work happening in our facilities. But if there is a medication that is finished in the consultation room, they have to run and go and fetch this medication in other spaces. They have to look for it,” said Masondo.

Masondo urged community members to work hand in hand with nurses at facilities and follow the complaints procedures.

“Ritshidze” — meaning “Saving Our Lives” in TshiVenda — has been developed by people living with HIV and activists to hold the South African government and aid agencies accountable to improve overall HIV and TB service delivery. – Health-e News